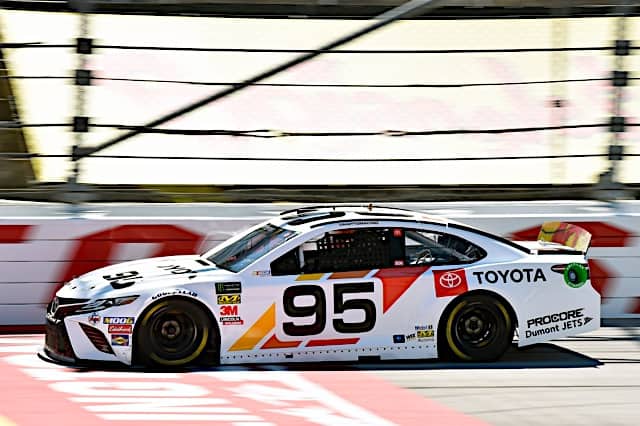 Matt DiBenedetto might want to head to Vegas a little early. After all, he has been on quite the heater lately.

DiBenedetto scored another top-10 finish on Sunday night (Sept. 1). Actually, thanks to a little adverse weather, it ended up being Monday morning by the time the checkered flag waved. But it didn’t seem to matter to the driver of the No. 95 Leavine Family Racing Toyota. The eighth-place result is his eighth consecutive top-20 finish — which includes five top 10s — going back to Daytona in July.

The Southern 500 is a race rich with tradition, but DiBenedetto would like to forget about most of the history that he has at the 1.366 mile oval. His best outing prior to this year’s edition was a 25th-place finish in 2015.

After the race, DiBenedetto spoke about the continuing effort from his LFR team.

“I know it sounds cliche but that was a total team effort. Our pit crew kicked butt. I give them a ton of props because they did a really good job again helping us get track position. That was huge. It was so hard to pass with the high downforce stuff so they helped a ton. [Crew chief Mike Wheeler] Wheels and the team made really good adjustments. We were running sixth and lost a couple there at the end, but we really maximized our day so that always makes you feel good. TRD throwback looked awesome. Good weekend, good team effort. Just gotta keep the momentum going.”

Behind DiBenedetto, Chris Buescher was next in 12th place at the end. Buescher and the No. 37 JTG Daugherty Racing team ran well much of the night, and the finish marks his 15th consecutive top-20 finish. Also, Ty Dillon just snuck into the last spot in the top 20 before the race ended.

The Xfinity Series tackled The Lady In Black on Saturday (Aug. 31), and she wasn’t too accommodating to the underdog contingent. Jeremy Clements had the best showing, finishing 12th in his family-owned No. 51 car. Ryan Seig and Gray Gaulding were the only other underdog drivers to land in the top 15 at the end of the event.

In the early 1990s, Bill Davis Racing was one of the best Busch Series (now Xfinity) teams. Davis enjoyed a great deal of success with Jeff Gordon, and plans were in the works to move the team to Cup with Gordon as the driver. Then in 1992, the Wonderboy jumped to Hendrick Motorsports and Davis went back to the drawing board.

In 1993, Davis went Cup racing with Bobby Labonte, but the two-year pairing didn’t produce the results either side expected. For a driver and an owner who were both accustomed to winning, having one top-five finish in two years had to feel like a failure. For 1995, Davis hired Randy LaJoie, but that arrangement was terminated before the halfway point of the season.

Then Ward Burton took the seat beginning with Bristol in August. He finished fourth in his second race for the team at Darlington and seventh a few races later at Charlotte. Then the series headed to Rockingham. Burton qualified the No. 22 Pontiac in third place and ran among the leaders all day. He led two times early in the event and took the top spot again with 60 laps remaining. Burton held off Rusty Wallace to score the first Cup victory for both himself and Bill Davis.

Burton became a mainstay at BDR, spending the next eight years behind the wheel. Each season the team got better, and the duo finally returned to victory lane in 2000. Three more wins would come in 2001 and 2002, including the 2002 Daytona 500. Neither ever won a Cup race without the other, as the Virginia native retired from driving after 2007 and Davis sold his team one year later.

Thanks to all the #RideWithJeremy Fans! See Ya @IMS pic.twitter.com/7KMPsEbqE3

Just a little game of catch with a few of their newest friends at @TooToughToTame! #NASCARThrowback@CoreyLaJoie | @BubbaWallace pic.twitter.com/uN8HydMQCs

From Dan Gurney and the All American Racers to the #Southern500. We’re ready to see this look race again! #NASCAR pic.twitter.com/UqsQheANnj

A trying day brings the @KeenParts team to a 36th place finish at @TooToughToTame.

Thank you to the Keen’s for helping us put this amazing throwback on track! We will get them next time! ?? pic.twitter.com/2llZtbJhbT