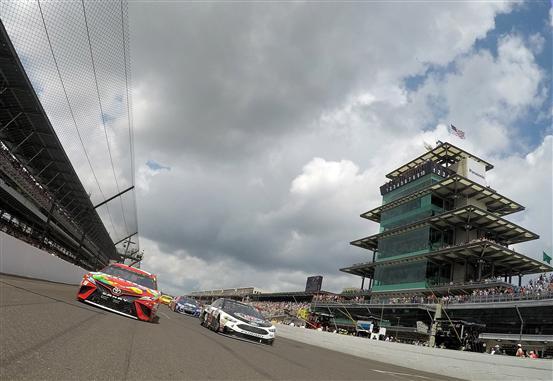 In NASCAR racing, there is always this tendency to repeat mistakes. There was a time when night races were rare and very popular. Now, we have so many night races, the originals aren’t special any more. Darlington Raceway came up with a unique and clever idea with the Throwback Weekend. Now, people are saying there should be more of them.

Eldora Speedway has a hit on its hands with the NASCAR Gander Outdoors Truck Series race on the dirt, and now fans are asking for a Monster Energy NASCAR Cup Series race on dirt. Can we please leave the unique events alone so they can remain unique? Imitation is the greatest form of flattery but can quickly put an end to the thrill of those special events when they aren’t special anymore.

It has been thrilling to see Matt DiBenedetto do so well this year and come so close to winning a few weeks back at Bristol Motor Speedway. This is Guido’s fifth full season at the Cup level, and some are only discovering his ability now, while some of us have been following him and bragging about his ability since his late model days.

But can we stop pretending that Joe Gibbs Racing,Team Penske or Stewart-Haas Racing will be swooping in to hire DiBenedetto? In fact, it’s the issue with JGR not having enough seats for their existing drivers that is costing DiBenedetto his ride at Leavine Family Racing after outperforming its previous drivers.

It would be wonderful to see what a talented driver like DiBenedetto could do if he was given a ride with a top team. But that will not happen unless Guido can suddenly bring many millions of sponsorship dollars to that team. Turn back the clock 20 or 30 years and that is exactly how teams found their new driver, by looking at the lower-funded teams. He will find a ride with another underfunded team that wants to have a better driver to move their team up a notch. But can we stop telling the Guido lie that he will be scooped up by a major team for next season please?

Does NASCAR Belong at Indy?

Turn back the clock 25 years and many Indianapolis Motor Speedway fans were very upset that the “taxi cabs” were going to race on “their” speedway. Eighty-six cars showed up for the 43 spots in the race, and over 300,000 fans showed up for that first stock car race at the Brickyard. Having their adopted home-state hero Jeff Gordon win that first race probably helped get the race accepted by the purists, and the second NASCAR race saw another huge crowd, although the entry list dropped to 50 cars.

Dale Earnhardt famously joked about being the first man to win in NASCAR at Indy, and we all shared a laugh. Dale Jarrett won the third year in front of a smaller yet still impressive crowd and started the new tradition of kissing the bricks.

This weekend will mark the 26th edition of having stock cars race on the hallowed grounds of the Indianapolis Motor Speedway. This will also be the 26th year in a row that interest in the race among locals will diminish again. While the racing has never been stunning at Indy with stock cars, it used to be much more exciting back in the day. Was it just because it was new to see stock cars there? Or is there something about the more modern aero packages that leads to worse racing on a flat oval of this size?

It used to be more special to run Indy because only the Cup guys did it for most of this event’s history. NASCAR racing, in my opinion, will always belong at the world’s most important oval racetrack, but unless more fans start showing up, its days might be numbered.

The NASCAR Cup race at the Indianapolis has been a bellwether race for who is the strongest championship contender for most of its history. Heading into this year’s race, it’s rather ironic that three of the Big Four in the 2019 season also share the lead for most points over the last five races at the Brickyard. While this new rule package NASCAR is using this year should close the gap between the big teams and the smaller teams, at the end of the day, I expect one of the Big Four to be kissing the bricks.

Win: Joey Logano – Should get his first chance to get romantic with bricks.

Show: Harvick – It’s been 16 years since he got his lips dirty on the bricks.

Indy is hallowed for open wheel cars, not stock cars. Once the ‘new’ wore off and it became obvious that the track was not made to run the bigger, heavier cars, someone should have decided long ago to return to IRP. But no, let’s pot for boring racing with limited sight lines and ‘tradition’ over good racing. Nascar has been doing this now for about 15 years, and the outcome is apparent in the empty stands.