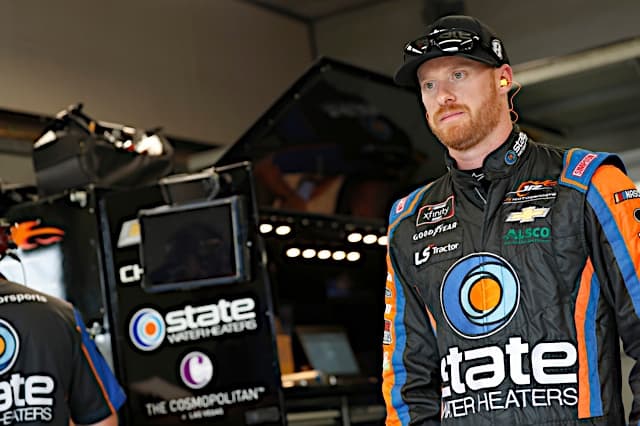 Jeb Burton hasn’t had many opportunities to showcase his talent in 2019. But when he has, the Virginia native has delivered.

Saturday’s (Sept. 7) Indiana 250 at Indianapolis Motor Speedway was no different. Burton qualified the No. 8 JR Motorsports Chevrolet in 12th position. As soon as the green flag waved, he weaved his way through the field, though he pitted under a late caution in stage one, setting him up with track position for the second stage.

Burton shined in the second stage, finishing fourth, only behind Justin Allgaier, Kyle Busch and championship leader Tyler Reddick. That led to track position for the final stage, where the No. 8 ran as high as second.

When the checkered flag flew, Burton crossed the finish line in fourth, tying a career-best finish in the Xfinity Series.

Emotion flooded out of the eyes of Burton post race.

“It’s just a lot of emotion,” Burton said. “Cry like a little baby because you don’t know if you’re going to ever race again. The sport is so tough, so sponsorship driven. It has a lot of emotion when you can run good like that. I’m lucky to have a team like that and the sponsors that I’ve got.

“It’s a little disappointing because I knew we were in a position to win. …We’re going to Texas [Motor Speedway] the next time [Nov. 2], then we’re going to Miami [Nov. 16]. We can win if we race all the time together.”

Over the past four seasons, Burton has been put through the NASCAR ringer. He once had a full-time ride in the Gander Outdoors Truck Series, placing fifth and eighth in the championship standings, respectively, in 2013 and 2014.

In 2015, Burton didn’t have an opportunity until late in the offseason when BK Racing picked him up for the season. In 28 events, he had a best finish of 27th at Martinsville Speedway.

Since 2015, Burton’s competed in no more than 16 total races in a calendar year, making it hard to prove he’s ready for a big-time opportunity. Regardless of the circumstance, he believes he has something to prove.

“Every time I get in the racecar I feel like I’ve got something to prove because this could be the last time out there, you don’t know,” Burton added. “Just a lot of emotion. You just don’t know when it’s going to be your last day, so you’ve got to cherish every moment.”

In five races this season for JRM, Burton has a pair of top-five finishes (he also finished fifth at Texas), while posting two additional top-10 runs (seventh at Charlotte Motor Speedway, ninth at Michigan International Speedway). But he said he believes this was his best opportunity to win thus far, though he knows it’s a tough balance between finishing in the top five and wrecking out while battling for the victory.

“You’ve just got to play it smart,” Burton said. “You’d rather finish fourth than 24th and take care of your stuff and be there at the end. That’s what we did all day. Taylor [Moyer, crew chief] made good adjustments to make my car to where it needed to be. It was a good day.”

Moving forward, Burton is going to continue cold-calling sponsors in hope of getting an opportunity of a lifetime, because he doesn’t want to go down without a fight.

“You don’t know when your last day is going to be,” he said. “I’ve had to bust my ass to get every sponsor that I’ve got and it hasn’t been easy. I’m in a good position now with JR Motorsports.”

Burton will have eight weeks off before returning to the No. 8 at Texas, which is the site of his lone Truck Series win, back in 2013.