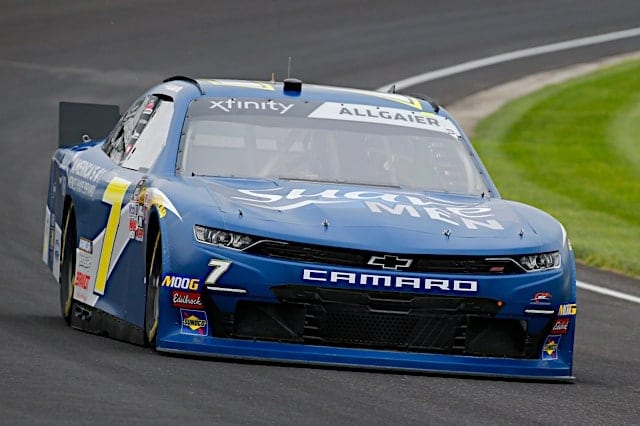 With NASCAR rolling into Indianapolis Motor Speedway, it had been a full calendar year since Justin Allgaier has visited victory lane in the Xfinity Series.

On Saturday (Sept. 7), Allgaier came up one position short for the fifth time since his last triumph.

Allgaier began the race in eighth position, his ninth consecutive top-10 start. As soon as the race began, the No. 7 car moved up the leaderboard, finishing sixth in the opening stage. In the second stage, Allgaier was able to record a playoff point by edging out Kyle Busch for the stage win.

During the final stage, Allgaier was in control until John Hunter Nemechek brought out the caution for wrecking in turn 1. All the lead cap cars elected to pit besides Josh Williams, who restarted as the leader. Justin Haley was the only driver to take two tires, lining up on the outside of the first row.

Because Allgaier was the first car on four fresh Goodyears, he restarted in third, lined up behind Williams. Ultimately,restarting behind a lesser-funded team with no fresh tires costed the No. 7 team valuable track position.

“I was frustrated in the moment, but on the flip side of it, the tires really weren’t falling off that much and they’re out there racing for points and money,” Allgaier said post-race. “I don’t fault them for that. I think circumstances would have definitely been different if we were able to restart on the outside of the front row.”

On the restart, Allgaier dropped back outside the top five. Instead, the likes of Tyler Reddick and Christopher Bell traded the lead back and forth until another caution flew for an incident involving Brandon Jones and Austin Cindric.

On the restart, Reddick and Bell crashed hard, moving Allgaier up to second, restarting on the outside of Busch. However, a push from JR Motorsports teammate Noah Gragson on the final restart wasn’t enough to score the No. 7 car its first win of 2019.

“Once he [Busch] got out front, I really was hoping that on the restart I could at least hang with him and stay to his right rear quarter panel,” Allgaier added. “When he got clear, I knew it was going to take a mistake on his part.

“One thing I know about Kyle is he’s fantastic on late race restarts, and very rarely does he make a mistake. I knew my job was to go pressure as hard as I could and ultimately we came up a little bit short. It’s nothing to hang our heads over, that’s the hard part. We did everything right, just wasn’t in the cards today.”

With the season Allgaier’s had, he’ll admittedly take a second-place finish. Though disappointed he didn’t record the victory, he said he believes the No. 7 team is on the cusp of winning and making a push toward the Championship 4 at Homestead-Miami Speedway.

“The way my year has gone, I’m one of those guys that is very happy with a second-place finish,” Allgaier mentioned. “At the end of the day, yes, this was disappointing.

“We’ve had good runs, we just haven’t been able to seal the deal. We did everything right. That’s the hard part; when you do everything right and your car is good and you come up a little bit short to a car that maybe was a little better down the straightaways with their aero balance, what else do you do? That’s really all you can do.”

Heading into the regular season finale at Las Vegas Motor Speedway, Allgaier sits fourth in the championship standings. In all likelihood, the No. 7 team will collect seven additional playoff points, if not eight should he get by Cole Custer for third in points.

But with a ton of speed as of late — leading 131 laps at Bristol Motor Speedway and 24 more on Saturday — Allgaier is peaking at the right time.

“You can’t say, ‘Hey, I’m going to start some momentum’ and it work out for you,” he said. “You’ve got to truly build it. We’re working hard and we’ve never given up. Even when you look at it and you’re like, ‘We should just abort and get ready for next season.’ We’ve never given up and this team has rallied through this.