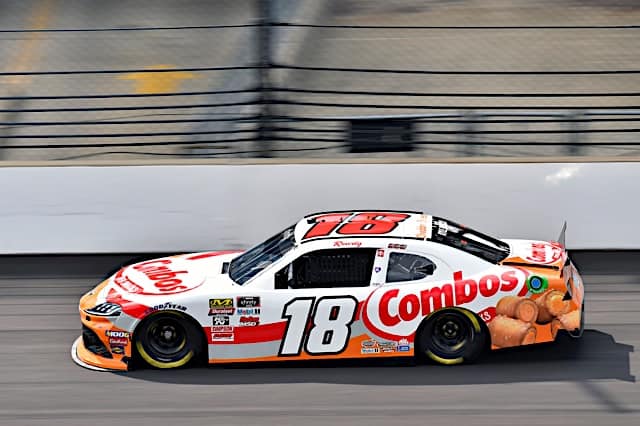 The only way that the critical moment of the Indiana 250 would have been more fitting is if Cole Custer had been involved.

Custer wasn’t much of a factor at Indianapolis Motor Speedway on Saturday, but his two chief rivals certainly where. Despite the presence of Kyle Busch in the field, Christopher Bell and Tyler Reddick were racing for the lead in the final stage, vying not only for a win but also for temporary supremacy in a season that has seen more than its share of momentum swings.

Then just like that, they were locked up together and headed for the outside wall, where both of them took hard hits.

The intensity was building. And then … it happened.@CBellRacing and @TylerReddick's days come to an end as they fight for the lead at @IMS. pic.twitter.com/D1E96P61wj

Reddick immediately went on his team radio to take responsibility, though it didn’t appear to be his fault unless he’s not supposed to be racing hard toward the end of a race. He certainly has his moments where backing off just a bit would serve him well, but this wasn’t one of them. Nor did it appear Bell did anything wrong.

The phrase “just one of those racing deals” is a bit overused in NASCAR, but this was a case where it applied.

With two of the Xfinity Series’ brightest stars taking each other out, the win ended up in the hands of the driver many assumed would claim it before the green flag waved. Busch presumably got one step closer to his permanent retirement from Xfinity competition with his 96th victory, so if he sticks to his guns, four more and he’s out.

His departure probably can’t come soon enough for Justin Allgaier, who got his dream of ending his winless 2019 stomped on once again. Allgaier had his Chevrolet all over the back of Busch’s Toyota in the closing laps but could never quite get in position to attempt a pass, which was a microcosm of his season if there ever was one. Leading 24 laps and finishing second won’t be much consolation to the No. 7 team—particularly since this was a race he won a year ago.

In the end, Bell, Reddick and Allgaier all failed to get what they wanted, and Busch racked up another win on a day when he did not have the best car. Kind of a bummer for everyone who isn’t part of Rowdy Nation.

The hand-wringing about the quality of NASCAR racing at the Brickyard is often warranted, and the first half of the Indiana 250 was more sleep-inducing than thrilling. But the Xfinity Series has produced more excitement at IMS in recent years than the Monster Energy NASCAR Cup Series, and there was an exhilarating stretch that lasted approximately from laps 65 to 71 that was as good as anything the series has produced this year.

It began with Busch, who was pushed to the lead at the beginning of the final stage by Jeb Burton, duking it out with Allgaier — with one prevailing and then the other, each pulling off passes to the inside.

It wasn’t long before Reddick and Bell joined the party as well, and at one point, both of them flew by Busch as he tried to make another move using the lower groove.

The fun couldn’t last forever, and in this case, it ended when a caution flew for John Hunter Nemechek, jumbling the front of the field after pit stops. But it was good stuff while it was happening, and exactly the kind of racing that people who think it’s good for the Cup Series stars to make occasional Xfinity Starts love to see.

NBC’s radio-style broadcast of the race was… well, a thing that happened.

In theory, Indy is a perfect track for having an announcer in each turn, and Mike Bagley can’t help but make any race he calls more exciting. The problem on Saturday was that every time the baton was passed to Jeff Burton, it sounded like he was doing a normal broadcast. The mix of the two styles was jarring and simply didn’t work.

On top of that, it’s time for NBC to consider not using Dale Earnhardt Jr. on Xfinity Series broadcasts. It felt like the network was trying to use him sparingly, which defeats the purpose of having him on TV in the first place.

And let’s be honest: While Earnhardt is hardly the first person to have conflicts of interest as a NASCAR broadcaster, he is the face of a race team that is the top organization in the Xfinity Series that isn’t part of a Cup Series team. It’s unfair to put him in a position where he has to be so mindful of not showing bias (which he does in admirable fashion, by the way) and silly to tiptoe around his ownership interests by limiting his screen time.

Use Earnhardt liberally during Cup Series races, and during the Indy 500, Olympics and anything else. Just not the Xfinity Series. Please.

Here’s another view of the Reddick and Bell crash, which sent them into the wall at a vicious angle:

Take another look at the late-race crash between @CBellRacing and @TylerReddick as they battled for the @IMS lead. pic.twitter.com/axbnps5VVw

Neither driver was hurt, though Bell commented that it was one of the harder impacts he’d experienced in NASCAR. This is the kind of incident that the SAFER barrier was made for, and thank goodness it was there in this case.

With the weekend off from the Gander Outdoors Truck Series playoffs, Austin Hill drove a Toyota Supra for Hattori Racing Enterprises in a partnership with MBM Motorsports at IMS and acquitted himself well, coming home ninth. He wasn’t the only underdog in the top 10 either, as Ryan Sieg returned to his early season ways with a 10th-place finish — one that required him to rally from a solo spin on the final lap of stage one.

Busch won, so that’s not a bad day at the office. The same couldn’t be said for Austin Dillon, who made an unscheduled pit stop just 12 laps into the race. It didn’t fix what ailed him, as he ended up extremely slow (as in barely moving forward) on the backstretch before finally coming to a stop and bringing out the first yellow flag of the afternoon.

Poor Justin Haley was happy to have a teammate for once, but his joy lasted all of 37 laps before Dillon called it a day.

“No one in this garage or in NASCAR or in racing in general should ever question Christopher’s driving ability. That wasn’t an issue there. His car just simply got loose and we just got together and didn’t really have a lot of racetrack.” – Tyler Reddick

“Out of all my NASCAR crashes, that definitely takes the cake. That one hurt a little bit.” – Christopher Bell

“I was making moves, and I’m sure there are guys in the Xfinity Series not happy with me, but I know my Switch team at JR Motorsports is happy.” – third-place finisher Noah Gragson

Sometimes it’s the journey, not the destination. If you had told anyone before the Indiana 250 that Busch would be the winner, no big deal, that’s expected. But there was drama and and a short but glorious stretch of racing along the way, so the journey wasn’t a waste of time.

The regular season comes to an end at Las Vegas Motor Speedway, though there’s very little suspense to the Xfinity Series playoff field unless there’s a surprise winner next week. You might recall that last year, there sort of was one, though it was Ross Chastain driving a Chip Ganasssi Racing entry, so not exactly a case of David slaying multiple Goliaths.

That said, the Rhino Pro Truck Outfitters 300 will bring the curtain down on regular season racing next Saturday, Sept. 14, with coverage slated to kick off at 7:30 p.m. on NBCSN.

I’m not sure why NBC thinks that having a ‘radio style’ broadcast for TV is a good idea, but if they want to continue to use this format, they need desperately to figure out how to make the announcers audible over the sound of the cars. At least 50% of the commentary was drowned out by the cars roaring by. I have no idea how good or bad most of it was simply because I couldn’t hear what was bing said until they turned it over to Rick Allen. They need to rix this or stop using this format.

Sports TV has decided that they need the “sounds of the game” incorporated into their presentations. They should go back and try to listen to their “product”.

If I wanted to be in the middle of loud walkup music and screaming fans I would buy a ticket.