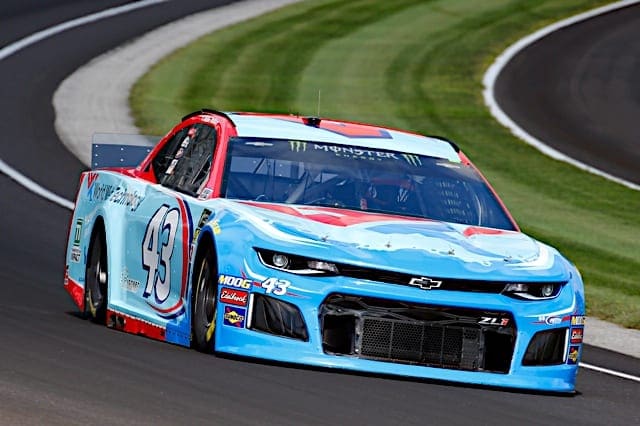 Prior to Sunday’s (Sept. 8) Brickyard 400 at Indianapolis Motor Speedway, Bubba Wallace plastered all over social media how good his No. 43 Richard Petty Motorsports Chevrolet was.

Come the race, he backed it up.

After a solid two practice sessions, Wallace backed up his social media game by qualifying 15th, one of his best starting positions of 2019. And once the race began, the No. 43 car remained relevant, finishing 14th in the first stage. In the second stage, he was one position better in 13th.

But the final stage is where Wallace shined. By maneuvering through the field and catching timely cautions, the No. 43 found itself inside the top five with less than 30 laps to go. And with a couple of late race restarts, Wallace was able to hold onto the track position he gained, placing third, his best finish since the 2018 Daytona 500 (second).

“Hell of a day for my team,” Wallace said post-race. “We needed this. We needed this weekend. We unloaded with speed, and I was bragging to everybody, ‘Hell, this [No.] 43 could be kissing some bricks come Sunday afternoon. We were just shy of it.

“It’s incredible to think about where the season started and where we were at 10 races in. Ever since Charlotte [Coca-Cola 600 in May], we’ve still been bringing some heat. …It’s an unforgettable day here in Indy.”

Wallace’s strong finish didn’t come without controversy. During pit stops under a lap 10 caution, the No. 43 was in an accordion effect incident on pit road. After being hit from behind by Chase Elliott, he was pushed into Jimmie Johnson‘s pit box, narrowly missing disaster, though it resulted in slight damage.

However, the damage didn’t slow the No. 43 Chevrolet down. Wallace saidnthat he believes the team has been close to this potential for months, despite previously having a season-best finish of 14th at Bristol Motor Speedway, two races ago.

“Out of a five-star field, we’ve had four ever since Charlotte,” he said. “That last one would flash for a second and then go away. We’d be running good and not have the finish that we deserve. This one was that fifth star flashing, solid from the time we unloaded until the time the checkered flag fell.

“If we can just have moments like that and weekends like that, we can start put together runs and generate more funding and resources and get our cars better.”

RPM is one of the smaller teams in the Cup Series. Even with the third-place finish, Wallace sits 27th in the championship standings. But the driver believes if the team keeps chipping away good things are on the horizon.

Funding is still an issue. World Wide Technology has upped its races this season, but Wallace said he believes there is more money coming in the doors, allowing the team to put races together like with by running better equipment.

“If this is what we can do right off the bat, you get excited for the last 10 races left and then excited for next year as well,” Wallace added. “We’ve just got to keep on digging. The race is over with, we finished third, yup, but now Vegas is on our minds. It’s just how competitive we are. We’re going to go out the mindset that we can win.”

With it being RPM’s first top-five finish on a non-superspeedway track in nearly four years (October 2015 at Dover International Speedway), Wallace said a conversation with his mother on Saturday added fuel to his fire to win: “My mom told me yesterday that, ‘When you win, tell them haters to kiss them bricks.’ So kiss mine.”

The third-place outing is the No. 43 team’s third top-15 result of the season, all in the past nine races. With the series heading to Las Vegas Motor Speedway next week, Wallace has a best outing of 21st in three starts at the venue.

If the stars are lined up right, some lucky souls win the lottery. Some days a 27th place driver finished third. How many really good drivers were already out of the race.

Who cares if other cars had issues. Bubba did a great job.

Agree. He still placed higher than Byron, Bowyer, Hamlin, Blaney, Newman, Elliott, Menard, Almirola, and Bowman – all of which run for better funded teams, ran the same race and had the same opportunities to execute strategy his team had.

I get it, the media fascination with certain personalities does get old (just like my annoyance with the non-stop focus on JJ the last few weeks/years). IMO Bubba knows what the score is. His back is against the wall, and he’s not the best driver and he’s not driving for the best team. But there are times they do well – the team performs and he doesn’t make any mistakes. This race was one of them. Even if you insert Jimmie, Kez, Busch 1&2 and Larson in front of him, he would still be in the top 10.

Plus, I find his awkward interviews amusing. He’s not there every week, so he’s not perfected the scripted interview that everyone else gives. In that regard, it’s kind of refreshing.

The NASCAR wags will be talking about this “accomplishment” (cough, cough) the whole week. Will there be a category of the first African American (half white guy, they forget about) coming in 3rd at Indy? Just asking and IMO!

kb – well it sure took them long enough to show bubba’s post-race interview…7:38 pm on that show victory lap.

oh if he had spoiled their playoff hoopla race at indy.

I was thinking the grist mill long term (at least till the pre race show next race) NASCAR America, RACE HUB, whatever show is talking NASCAR these days…various print outlets, websites, etc. They got ho-hum race that they need to prop up. A light bulb will go off as of last night to milk his 3rd place ‘excellence’ to fill up air time. IMO, of course.