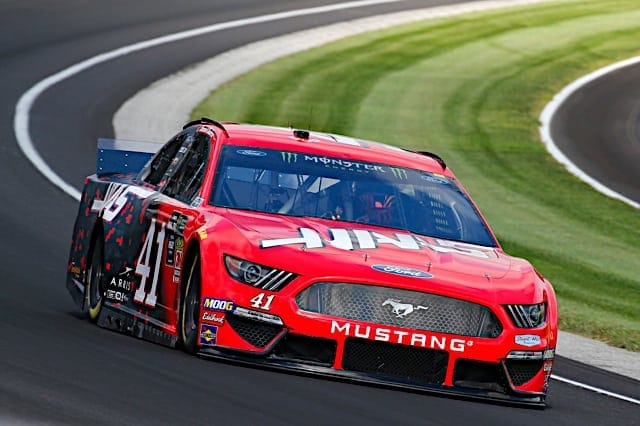 Entering Sunday’s (Sept. 8) Brickyard 400, Daniel Suarez and Ryan Newman were in a tie for the final playoff position. Fast forward to the end of the final stage of the 400-mile race and the two were still in a dead tie.

But for Suarez, it was much more eventful than that. On lap 10, the No. 41 Ford smacked the wall, pitting under caution on the same lap for possible oil on the track. Because of the damage and untimely cautions, Suarez finished the opening stage in 19th, while Newman placed fifth.

In the second stage, Suarez rocketed to the front, placing sixth, ahead of Newman in 12th. And in the final stage, the No. 41 car was in a good position until a caution flew on lap 128 for Kyle Larson getting loose and hitting the inside wall, one lap after Suarez had made a green flag pit stop.

The caution trapped Suarez a lap down, though he received the free pass, restarting 23rd.

“In the last pit stop cycle, the caution came out one lap after we pitted and that was unfortunate,” Suarez said after the race. “That was not a position we wanted to be in. Unfortunately we were in that position, and after that we only had 26, 28 laps to go, so I knew it was going to be tough.

“I wasn’t giving up, I was running extremely hard, three-wide, doing everything I could to try to get there.”

In the sprint to the finish, and two cautions later, Suarez got into Matt Tifft with less than 15 laps to go, causing the No. 36 car to hit the wall. Suarez admitted he wasn’t holding back at that point.

“I had to be aggressive,” Suarez stated. “I understand that you’re [Tifft] blocking somebody that has more speed than you. I was way faster than him; I had fresh tires and a faster racecar, and he was blocking me for four laps. When he gave me the line, he gave me the line in the entry of the corner, he didn’t give me a line on the straightaway. I just got loose and I got him.”

That set up a restart with less than 10 laps to go. Restarting outside the top 15, Suarez was able to race up to 11th, finishing four positions — and 1.3 seconds — behind Newman, who was awarded the 16th playoff position.

Despite being frustrated, Suarez said he gave it everything he had.

“I can tell you it wasn’t for a lack of effort,” he said. “We just got two or three spots short. … We have to keep working hard and building good racecars for every weekend.”

With 10 races to go in the 2019 season, Suarez is the best of the rest in terms of drivers who didn’t make the playoffs. He said he believes, though still not making the playoffs in three seasons at the Cup level, there’s something to race for.

“We’re still racing,” Suarez added. “I feel like as a team we have to keep getting better. We’re not in the playoffs, but we have plenty of things to show up [for]. If we can win a race that would be like making the playoffs, or even better.”

The series heads to Las Vegas Motor Speedway next weekend, where Suarez finished 17th in March.

I told you Suarez has no talent. If you can’t make the playoffs for two different tier 1 teams, then you shouldn’t be racing in the Cup series.