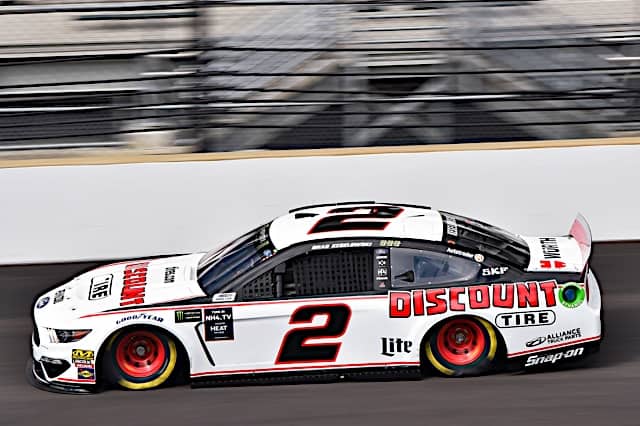 Add in Landon Cassill and it’s been a wreck-filled race Sunday (Sept. 8) for the Monster Energy NASCAR Cup Series at Indianapolis Motor Speedway.

Cassill was the first to endure a hard impact. His No. 00 Sherfick Companies Chevrolet for StarCom Racing apparently blew a tire while going through turns 1 and 2. That caused a hard impact on lap 41 which left his car pasted against the outside wall.

For the second year in a row, Landon Cassill suffers a big crash at Indianapolis. The good news is the StarCom Racing driver is out of the car and seems to be okay.#NASCAR #Brickyard400 pic.twitter.com/v392cApx2l

“Felt like the right front tire went down. I’m fine,” Cassill said after emerging from the track’s infield care center. “I just hate it for my guys and my team. That was a fresh car for us and I had some good speed; I was happy with it.”

The wreck jumbled the field under caution as a handful of drivers chanced it by staying out. That gained them track position but left slower cars in front of teams with fresher tires.

Brad Keselowski and Erik Jones were fighting to push by those drivers, including playoff bubble contenders Ryan Newman and Jimmie Johnson, when they made contact. The end result was a scary, high-speed wreck that left Keselowski’s car sitting sideways on a weirdly-placed tire barrier on the backstretch.

Luckily, both drivers were OK from an incident where Jones took full responsibility.

“It’s my fault,” Jones said on NBC after the wreck. “I got loose and made a mistake. I didn’t think Brad was going to be so tight on me. I feel bad for the 2. Wasn’t anticipating enough and drove in too hard for it. Wish we would have had a good day.”

Keselowski, the 2018 winner of this race, had to awkwardly crawl out of his Team Penske Ford. It was one of the weirder wrecks in NASCAR history at IMS that left him calling out the tire barrier placement.

“There’s this spot on the wall with just an atrocious angle,” Keselowski said. “I don’t know what that spot is but it doesn’t need to be there. This track was part of the safety revolution about 15-20 years ago and I think it’s time for another.

“We were racing with some cars that didn’t have new tires. Got real tight with the 48, lost the nose and the air, trying to leave some room and came down on Erik [Jones] more than I thought I did.”

Both Keselowski and Jones commented on how challenging the racing was with NASCAR’s new handling package. The hope was lower horsepower would lead to more competitive racing but cars often seemed stuck in place after restarts.

“Really challenging,” Jones said when asked about passing on the racetrack. “That’s part of why I was making that move was just trying to get track position. Wasn’t anticipating enough and drove in too hard.”

A couple of things strike me so far in this race:

1. How thin the crowd is

2. That the announcers can’t shut up about Johnson making it hard to watch the race with the sound on. I’m not for or against Johnson, I jut can’t stand listening to it non-stop.