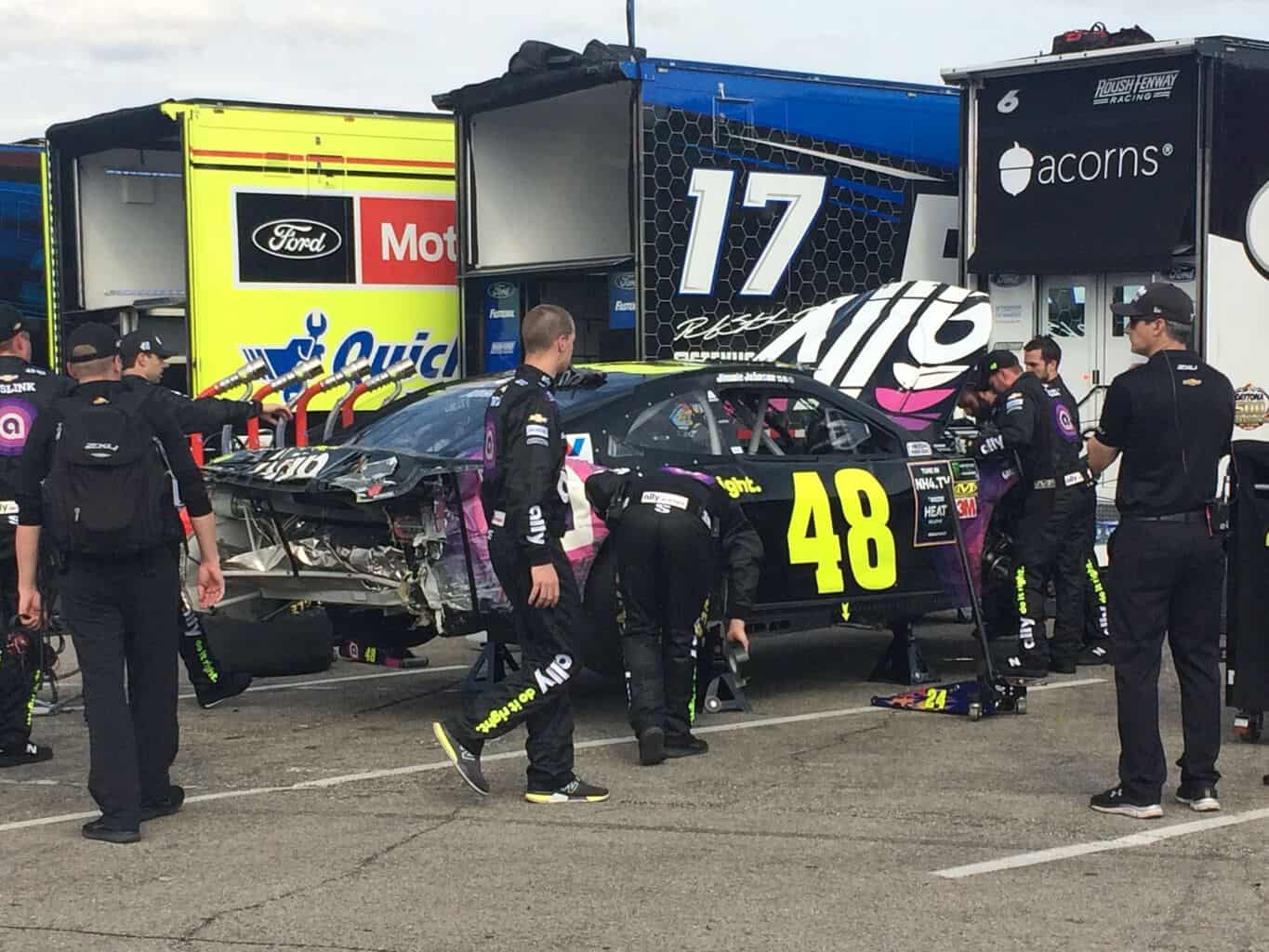 The wrecked No. 48 Hendrick Motorsports Chevrolet driven by Jimmie Johnson is brought to the garage during the 2019 Big Machine Vodka 400 at Indianapolis Motor Speedway. Photo: Mark Kristl

The 15-year NASCAR playoff streak for Jimmie Johnson is over.

Johnson’s run came to abrupt end during the final stage of Sunday’s (Sept. 8) Brickyard 400 for the Monster Energy NASCAR Cup Series. Pinched on the inside during a restart, contact with William Byron sent the No. 48 team spinning in front of heavy traffic. Daniel Hemric, Paul Menard and Kurt Busch were among those who piled in the ensuing wreck.

“We were three-wide going into Turn 2 and I know the No. 24 [Byron] was super tight on me,” Johnson said after emerging from the infield care center. “I’m not exactly sure how the rest of it unfolded from there but I got sucked around and I was backwards instantly.”

It was an incident that ended Johnson’s chances after a hard-fought battle two stages into the Brickyard 400. Only gaining a handful of points on rivals Ryan Newman, Daniel Suarez and Clint Bowyer, it was almost certain he’d need to win in order to make the 16-driver field.

Track position was a constant problem, beginning early in stage one when pit road contact around him caused an extra stop under yellow.

“We had some adversity to overcome,” he explained. “There was that pit road crash [in which Chase Elliott spun] that almost wiped out our rear tire changer and in the panic of dodging everything they didn’t tighten up the right rear tire. I had to come back around and pit from the top 5 or 6 or whatever it was to get our tires squared away.”

“I think our car had good pace, it’s just these restarts are so crazy with this rules package. It was so hard to pass.”

In the end, Johnson never really did get in a position where he could put pressure on other bubble drivers. But he would have appreciated a little more room from a teammate to keep him in the mix.

“I just feel like there was a position there William [Byron] could thought about the position he put us in,” he said. “It could have been avoided, I felt like.”

The DNF officially puts to rest one of the most impressive streaks in NASCAR history. Johnson was the only NASCAR driver remaining who had made the playoffs every time out since its inception in 2004.

We may never see this matched. #Brickyard400 #NASCAR

“I am impressed we have been in 15 consecutive playoffs in a row,” he said. “Our record doesn’t stink. We wish we could have kept it going, but life goes on.”

Now that he’s gone 15-for-16, Johnson must focus instead on building his team for what could be a final run at the title in 202o. (His contract currently runs through the end of next season.)

“Keep this momentum we have as a team,” he said when asked about future goals. “I think everyone can see the performance is on the way up. Just to keep drilling that and to get ourselves back to victory lane.”

Dustin Albino contributed to this report.

Thank God the Jimmie has never missed a playoff streak is over. Now we never have to read another story or another interview discussing how the universe will implode if Jimmie should miss the playoff.

All things must pass.

Gerry Guldborg
Reply to  Bill B

Lol what ever will we do ???? No Jimmie in the playoffs??? NASCAR cannot survive

That’s what NBC is saying…

Producer: “Great! What will we have to talk about non-stop now?”
Director: “There are 39 other drivers out there, I guess we could talk about them?”
Producer: “That’ll never work! Dammit! Why did Jeff and Jr. have to retire? At least between the 3 of them we always had something to go on!”

Just something about 7 champions and that 8th being out of reach. Too many races and changing cars and aging drivers.

Will retirement be whispered about?

Good. And his 7th time was a gift from BZF IMO. Needed that chant “7 TIME” to become a reality. A dive down on the leader by Cousin did the trick. 7 TIME was a reality! No way in hell he was a factor in that race at all until that blatant manipulation, IMO!