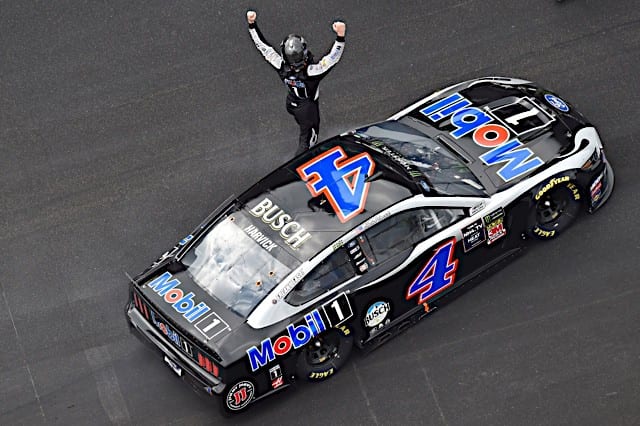 Harvick led from the pole before the first caution flag flew, with Stewart-Haas Racing teammate and playoff bubble driver Daniel Suarez getting into the wall less than 15 laps into the race.

After going back to green, Landon Cassill’s No. 00 car blew a tire and slammed into the wall, demolishing the Chevrolet and buckling the roof of the car.

Logano and Kyle Larson gambled on pit stops, staying on the track, while Jimmie Johnson got off of pit road first after taking only two tires.

Harvick blew by Johnson to get up to third, but that was as far as he would get. A stage-ending caution flag flew when Erik Jones and Brad Keselowski made contact, Jones backing hard into the outside wall and Keselowski crashing violently into the inside tire barrier.

Logano won the first stage under caution, and the race fell under the red flag as crews removed Keselowski’s car from atop the barrier.

Harvick got the lead back while Larson closed to second, but another caution flew when Kyle Busch‘s engine expired on the backstretch.

Another caution for debris followed soon after, and Harvick won the second stage under the yellow flag.

Cars went around again on the lap 105 restart, but green-flag racing didn’t last long. Johnson and William Byron ran too close to each other coming out of turn 2, sending the No. 48 hard into the wall. Kurt Busch, Daniel Hemric and Paul Menard were also collected.

This was the final nail in the coffin for Johnson’s playoff hopes, and he missed the postseason for the first time in his career.

Ryan Blaney also led for 19 laps, but Harvick held on as more cautions came out. Playoff drivers Larson and Alex Bowman both had issues, and the field stacked up for a restart with nine laps remaining.

Bubba Wallace, one of the race’s biggest stories, made his way up to third before the restart, but wasn’t able to get by Harvick or Logano. The two drivers made up the front row for the restart, having a side-by-side battle for about a lap before Harvick set sail and pulled away.

Wallace closed up to the back bumpers of the No. 4 and No. 22 as they raced each other, but wasn’t able to make a move as he settled back into third, his second career top five.

Clint Bowyer secured his spot in the playoffs with a top-five finish, while Suarez and Ryan Newman‘s playoff hopes came down to the final laps. Newman finished eighth, while Suarez ended the day in 11th. In doing so, Newman clinched his position with four points to spare, becoming the No. 6 team’s first postseason appearance since Mark Martin in 2006.

Harvick crossed the line six seconds ahead of Logano, with Wallace, Byron and Bowyer rounding out the top five.

“This is great,” Harvick said. “I can’t tell you how much coming to Indianapolis means to me. As a kid, I watched Rick Mears win Indy 500s and got to be around him as a kid and he was my hero, so coming here and winning here is awesome.”

Harvick kissed the bricks for the second time in his career and for the first time with Stewart-Haas Racing.

“These guys on this race team here built a heck of a racecar,” he said. “Same stuff we took to Michigan and we had a good weekend there and went to victory lane , so to come here to the Brickyard, I know how much this means to Rodney [Childers] and Dax [Gerringer]and all these guys that work on this car, because we’ve been so close to winning here before.”

“It’s one of the greatest places on earth to race,” Harvick said.

The Cup Series playoffs will begin next week at Las Vegas Motor Speedway, with the South Point 400 starting around 7 p.m. on Sunday, Sept. 15.