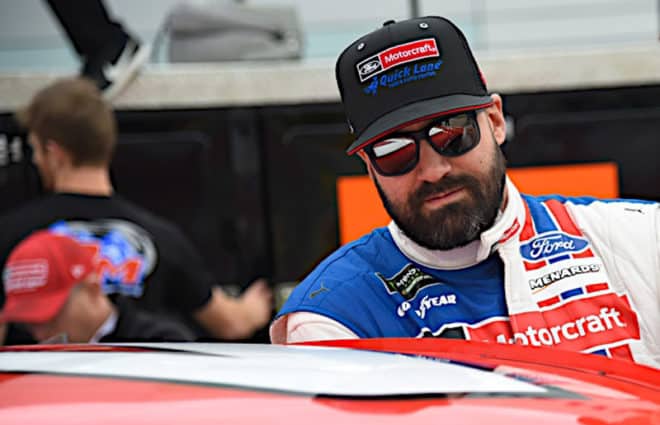 Paul Menard Retiring from Full-Time Competition After 2019, Matt DiBenedetto to Drive No. 21 in 2020

Wood Brothers Racing announced Tuesday (Sept. 10) that Menard is retiring from full-time competition at the end of 2019, with DiBenedetto taking over the No. 21 in the 2020 Monster Energy NASCAR Cup Series.

The move comes after DiBenedetto was informed he would not be returning to Leavine Family Racing’s No. 95 after the end of 2019 earlier this summer.

“I’ve enjoyed every moment of my career racing in the NASCAR Cup Series and I’m so thankful for all the great memories and friendships I’ve made through this sport,” Menard said in a team release. “But I’m looking forward to spending more time at home with my wife Jennifer and our two young children while moving forward with the next chapter of my life.

“I want to thank everyone at Wood Brothers Racing, along with Team Penske, and our partners at Menards, Motorcraft, Quick Lane Tire & Auto Centers and Ford. It’s been a privilege to work with them and some of the true legends of our sport, including Andy Petree, Dale Earnhardt Jr., Robert Yates, Richard Petty, Richard Childress, Roger Penske and Glen and Leonard Wood. I’m excited for what the future holds and I’m looking forward to sharing the plans for 2020 and beyond in the coming weeks.”

Added DiBenedetto: “I am so excited about this opportunity to race for one of the most successful teams in NASCAR history beginning in 2020. The No. 21 Ford is one of the most accomplished and iconic cars in our sport and it will be an honor to join Wood Brothers Racing and help carry on the team’s tradition of success in NASCAR. I want to thank Eddie and Len Wood, Kim Wood Hall, Menards, Edsel Ford and Ford Motor Company for this opportunity.”

I don’t even have the words to describe how thankful I am!! Paul is such a great guy and I’m lucky to call him a friend and I wish him the best! So excited to take over and drive for one of the most legendary teams in NASCAR next year! I have so many people to thank!!!! 🥳 https://t.co/qJy1kcpV10

“We want to thank Paul Menard for his dedication to the team over the last two seasons,” Wood Bros.’ Eddie Wood said. “We’re looking forward to a strong finish to 2019 and we wish him nothing but the best for the future. All of us at Wood Brothers Racing are excited to welcome Matt DiBenedetto to the team beginning next season. Matt has shown a lot of promise on track and everyone has seen it in his results this season, especially over the past several months. We want to continue to build on that success together as we gear up for 2020 and the future of Wood Brothers Racing.”

Menard has driven for the Wood Brothers since the start of the 2018 season. He’s earned one top five and 11 top 10s in that span, plus one pole. He finished 19th in the 2018 standings and currently sits there in 2019.

Menard’s plans for 2020 are unknown; as it was specified that he was stepping away from a full-time role, it’s possible he’ll compete on a part-time basis.

Rutherford is the managing editor of Frontstretch, a position he gained in 2015 after serving on the editing staff for two years. At his day job, he's a journalist covering music and rock charts at Billboard. He lives in New York City, but his heart is in Ohio -- you know, like that Hawthorne Heights song.
Previous Beside the Rising Tide: Old vs. New
Next JJL Motorsports Seeking New Owner After 2019