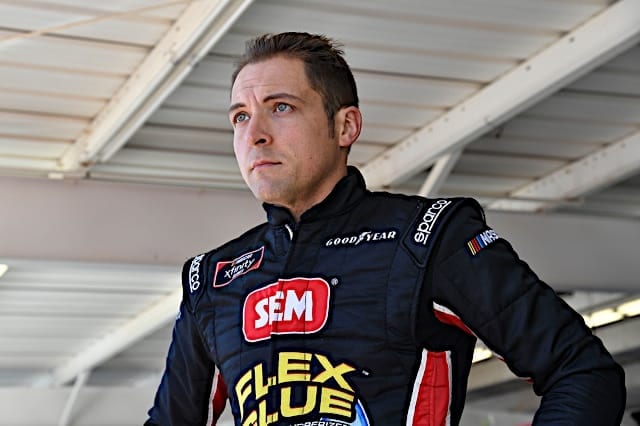 Flashback to 2007, Jimmie Johnson was in the midst of five consecutive championship-winning seasons at the Monster Energy NASCAR Cup Series level. But in the NASCAR Xfinity Series, it was a shoe by the name of Stephen Leicht who was turning heads.

At the time, Leicht was competing for Robert Yates Racing. He won his one and only NASCAR national touring race at Kentucky Speedway, edging out the likes of current Cup stars Aric Almirola and David Ragan. All was going well for the North Carolina native.

Despite finishing seventh in the championship standings in 2007, 2008 was a reality check for Leicht. He opted to run a five-race schedule with Richard Childress Racing at the Xfinity level before running nine races with the same company in 2009. He scored six top-10 finishes in the latter.

In 2010, those opportunities went away, and what was once a proven winner just a short time ago was lost because the glory had vanished.

“I got to a point where I didn’t even want to go to the track anymore,” Leicht recently told Frontstretch. “I would barely watch it on TV because you see all of these kids come in with money, and some of them weren’t honestly that good, but they’ve got the money, that’s all that matters, and they get to drive.

“A guy like myself, JJ Yeley or Brad Coleman, guys like that, came in and proved what we can do in the car. Hell, I won a race, and it didn’t matter. And it didn’t matter because at the end of the year, we didn’t have a check to write. The sport’s not what it used to be, and it’s hard for guys like myself that have to go through that every year.”

Since 2010, Leicht has competed in all three national touring series. In 2012, he competed in 15 events for Circle Sport Racing and won the Rookie of the Year award in the Cup Series.

An average finish of 35.6 wasn’t enough for to satisfy Leicht. However, it was better than working a day job, which he did for a brief stint that felt like an eternity.

“Rock bottom was working at a car dealership [Dodge Jeep Ram in Cornelius, N.C.] for six months and not racing at all and not having enough money to go the racetrack whatsoever,” Leicht said. “That was when I wasn’t watching it and doing what I could to get by and hoping things would get better.”

Ultimately, Leicht’s mind was focused on racing, believing wholeheartedly he should be on the racetrack, competing for wins, if not championships, in NASCAR.

“On a personal level, I was in a big state of depression for a while, even went through some therapy and didn’t know how to deal with it all,” Leicht stated. “It’s something that I’ve had to battle through and I still struggle with. I still have days where we have a bad day here and knowing we should be better.

“When you’re a competitive person or competitive as I am and it’s the way I’ve been my whole life and you are used to winning most weeks growing up in whatever you get in, it’s hard to accept anything less than that. I had to learn what our expectations were going in and just try to overcome those expectations slightly.”

“I took it pretty hard,” Leicht said. “The thing that upset me the most was I was with a team that wasn’t the best at the time and we won a race and finished top 10 in the points. I’ve never felt like I’ve gotten a real opportunity with one of these top teams.”

Around 2013 and 2014, Leicht saw a therapist, which at first was an extremely challenging task. He had to get over the roadblock of thinking that therapy doesn’t work or wouldn’t help overcome his demons.

“I knew some of the answers to the things I was battling, knowing the way I needed to approach things and the mindset I needed to have, and I wasn’t willing to go there like I needed to.

“A therapist helped me get to the point where I could look at things the right way and cope with stuff that’s not in my control and look at things differently in life, outside of racing — not just racing.”

Fast forward to the present. Leicht, now 32 years old, is competing full-time for just the second time in his career — the last being the aforementioned 2007.

In 25 races this year, Leicht sits 19th in points. His season-best finish was fifth at Daytona International Speedway, his first top five since 2007. Overall, it’s been a good adjustment to competing for JD Motorsports.

“I’m just now feeling like I’m in the rhythm again of showing up to the track, not having to second guess where the grip level is going to be at, what the car is going to be like,” Leicht said. “I pretty much have a general idea of what it’s going to be like and I know what I need to do behind the wheel everywhere we go now.”

It’s hard to call it a rejuvenating year in his career, but Leicht hopes to consider it one come Homestead-Miami Speedway.

The series heads to Las Vegas Motor Speedway this weekend where Leicht has a pair of 18th-place finishes in five starts in Sin City.