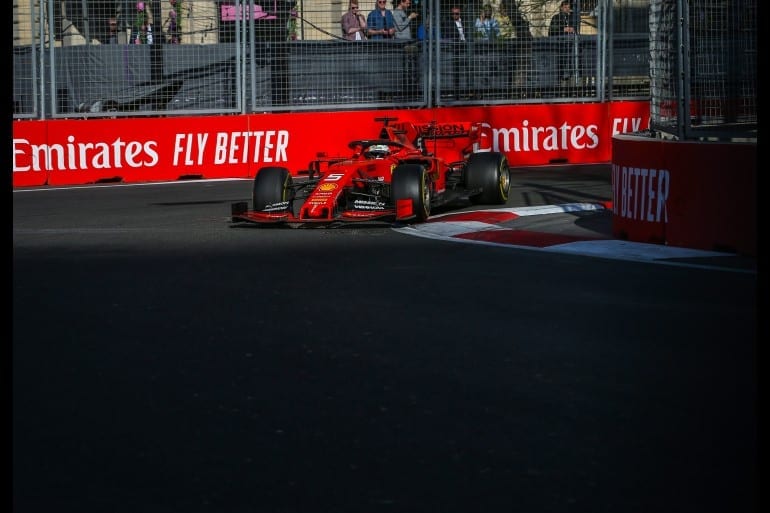 Sebastian Vettel is falling behind his teammate (credit: FIA media)

The race this past Sunday looks to be the sign of change at Ferrari. At its home track for the Italian Grand Prix, Charles Leclerc put his car on pole then titillated and frustrated Lewis Hamilton with a battle for first for nearly half the race before driving away with the win. That’s a pretty sweet day for Ferrari. Well, sort of.

On the other side of the Prancing Horse garage, Sebastian Vettel let a solid podium opportunity slip through his hands like his fingers were taped together and his hands covered in olive oil. He looked more like a novice F2 driver than the four-time champion he is.

His race began benign enough from fourth, but he lost a spot behind Nico Hulkenberg that he then seemed to fight way too long to gain back. Again, none of that seems terribly concerning.

Then he lost his mind on lap six. Whether his operating system blipped on the lap, he was caught daydreaming, or he stared at a fan for too long, it didn’t matter. He bounced off the curb near the Ascari chicane and spun out. That’s somewhat mundane but he should not be making these kinds of errors at this stage of his career.

He then compounded the mistake by coming onto the track in an unsafe manner, forcing Lance Stroll to attempt to avoid Vettel – which he didn’t. Stroll clipped Vettel’s wing with the damage being enough to send Vettel to the pits for a new nose. After the stewards gave the incident a look, they gave Vettel a stop and go penalty with an addition of 10 seconds added to the stop. They, in essence, told Vettel that he was done for the day without actually parking him.

Sure enough, Vettel finished in 13th, which failed to earn Ferrari any points. In addition, Vettel now stands three points away from a one-race ban, something that would be utterly shocking to have happen. Yet Vettel is playing it all too close to taking himself out for a race with his questionable decision-making.

All of the above is just a long way of saying that Vettel looks to be losing or has already lost his place as the leader of Ferrari. His teammate, with his two wins this season, are the only victories the team has. Leclerc is holding the fourth position in the standings while Vettel sits 13 points back in fifth. Vettel has no wins this year, just three second-place finishes, three third-place finishes, and then two finishes outside the top 10.

Compare the two drivers and the stats indicate that there is not much in the way of a discrepancy. Such proximity in the statistics is not uncommon in F1 where teammates are expected to run close to one another because of their shared equipment.  Perhaps the most telling statistic comes from qualifying.

It is in setting the grid that Leclerc is burning Vettel, earning four poles to Vettel’s one. Just as important is that Leclerc has bested Vettel in qualifying in each of the last seven races. Such numbers do not portend Vettel staying as the favored driver in the organization.

Ferrari did not sign Leclerc in the hope that he would be a happy wingman and just drive around protecting Vettel on the track. They knew that they were bringing up someone who would soon be the face of the organization and there was every reason to believe that he would be that.  No one, however, could have expected for Leclerc to start blending with the team so well and then start to leave his teammate in his exhaust wake.

Vettel is proving to be a curious former champion. His four world titles all came when Red Bull was a juggernaut, leading the field then as Mercedes has done for the past six years. Since joining Ferrari he has found more frustration than the form that made him look like he might be the next coming of Michael Schumacher. Instead he’s been more like Ralf Schumacher.

The dropoff between the two Vettels may not be that precipitous but what has become more disconcerting is his race management.  He’s making costly errors and flailing mistakes. He won five races by this time last year and then fell apart. This year he is lowering the bar and just putting together a forgettable season.

The more that Leclerc looks good the worse Vettel looks. The question that is becoming apparent is whether or not Vettel will last at Ferrari. Such a thought would have seemed like the ramblings of a lunatic last year but with the future looking to have been handled, Vettel is looking like yesterday’s news.

Will such a move happen? Probably not at the end of this season. There’s still a reason to keep Leclerc and Vettel together and that is mainly to challenge those flying Silver Arrows of Mercedes or at least get in the way to make their titles accumulation more difficult. But Vettel seems to have succumbed to the expectations and the fishbowl that accompanies driving for Ferrari. Getting out of the situation might not be such a bad choice.

Where Vettel could go is a discussion for another time, but Red Bull could always be his home again and that would surprise no one.  His comfort with the team and his stature with the organization are still noted and even though he jilted them to join Ferrari, they might welcome the prodigal son home.

For now, Vettel gets to see red, from the anger of his performances and the tail fin of his teammate.