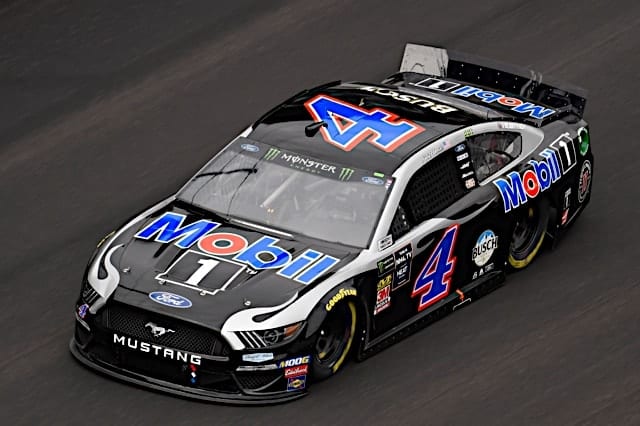 To simply put it, no one could catch Kevin Harvick last Sunday at the Brickyard. The No. 4 Stewart-Haas Racing Ford was out front for 118 of the 160 circuits around the Indianapolis Motor Speedway. Will such a dominating performance continue this weekend in Las Vegas?

A rare engine failure for Kyle Busch on lap 87 quickly derailed his efforts to gobble up more stage and playoff points to pad his already comfortable points cushion for the playoffs. However, with so many bonus points in his back pocket, is Busch the easiest pick to reach the Championship Four?

Chase Elliott has been noticeably quiet the last several weeks and a skirmish on Indy’s narrow pit road didn’t help things. Is Elliot just having tough luck, or is he slipping into another funk, similar to the one he had before his big Watkins Glen win?

A week after his Toyota ended up in victory lane at Darlington Racing, Erik Jones‘s No. 20 machine ended up on the back of a rollback after destroying his Joe Gibbs Racing entry in a nasty crash at the world’s most famous race track. What will it take for Jones to find consistency in the remaining ten races of 2019?

Questions are only multiplying as the Monster Energy NASCAR Cup Series has finally found its way to the playoffs. With the bubble drama and chaos we saw at Indy behind us, our Frontstretch experts were commissioned to determine the top 12 drivers in NASCAR. Here are the highly debatable results of the week’s edition of Power Rankings, Indianapolis….

Tony Stewart captured yet another victory at the famed Indianapolis Motor Speedway, putting on yet another impressive performance.

With Harvick’s dominating victory, the driver of the No. 4 car has dethroned Kyle Busch for the number one ranking, which couldn’t come at a better time for Happy, who is primed to chase his second championship.

For the second time in three weeks, Kyle Busch has been bumped from the top spot of our weekly power rankings due to his malfunctioning smoke machine… err… Toyota Camry. But don’t you worry, Busch found a way to win this weekend, while all of his fellow competitors were preoccupied with the heavyweight fight down at the Applebee’s on Crawford Road.

We’re kissin’ bricks at @IMS! @KyleBusch and the @Combos crew just won the @XfinityRacing event with their #Supra. #NASCAR pic.twitter.com/yhlzQKb2zJ

Kyle Busch wasn’t the only Joe Gibbs Racing driver to go up in smoke at Indy. Hamlin’s scary moment in practice forced him to a backup car for last Sunday’s race. However, it was probably a good thing it happened before race day since the rest of his teammates encountered major trouble during the race. Hamlin motored home sixth.

Absolute scenes from @IMS.@DennyHamlin's car catches fire at the end of final practice, and the rest of the @NASCAR drivers stop to make sure he's OK and gets out. pic.twitter.com/ToHCBU6RoJ

Apparently, Logano has a new NASCAR teammate. Simon Pagenaud has apparently replaced Brad Keselowski, and the duo seems to be engaged in a serious conversation with their other teammate Ryan Blaney about how they can get their Fords better for race day.

A couple teammates catching up this afternoon at @IMS!

Who knew pit road at Indianapolis bears so many resemblances to Martinsville Speedway. With the amount of damaged cars that exited the place, it certainly seemed like a typical day at the Paper Clip.

Unfortunately for Truex and others, we were not at Martinsville and aerodynamics actually mattered. Truex’s damaged quarter panel netted him a dismal 27th-place result.

Let’s hear it for @MartinTruex_Jr and the 1.7K names of associates who raised money for @MTJFoundation! #OwnTheTrack @IMS for the #Brickyard400! pic.twitter.com/b78uOSkn1p

Did anyone notice the genius marketing illustrated by the folks at Discount Tire Sunday? With perfect product placement and a large national television audience, Discount Tire gained valuable exposure for their product. Their marketing team deserves a raise.

“All of these and and a wide selection of others, available at your local Discount Tire.” #NASCAR #Brickyard400 pic.twitter.com/OXtATJFQXr

Unfortunately, Elliott hasn’t quite enjoyed as much success as of late as his beloved Atlanta Braves have. With 90 wins, the Braves sit fourth on NASCAR’s all-time win list, while Elliott sits tied for 79th. The young man has some making up to do.

It has been a whirlwind for Jones the last several weeks. The Byron Michigan native won arguably the biggest race of his life at Darlington, only to follow up with a very scary crash at Indianapolis. Consistency has been hard to come by this season for Jones. Can he find some at Las Vegas, a track that has been hit or miss for “that Jones boy.”

Raceday for the @STANLEYSecurity @Wish4RHeroes #Camry team and we’re rolling off P14. Tune in to @NASCARonNBC at 2 p.m. Looking to ? some bricks today. #TeamSTANLEY #TeamToyota pic.twitter.com/Zio9OQo8Ee

The king of cool is just trying to be cool…

While Kurt Busch might not have the resume that drivers such as his brother and Harvick have this season, the playoffs start now.

That’s all that matters.

While disappointment may loom throughout the garage area after Jimmie Johnson’s last-ditch effort to make the playoffs comes up short, it may have slipped many minds that Chad Knaus is looking to tie Dale Inman this season for the most championships won by a crew chief. Yet, his fate lies on the shoulders of a 21-year-old college student.

I always get asked what I do during the week. Here's a glimpse into what my day looks like – when I'm not in team meetings or studying, of course. ?

It is hard to comprehend that a McDonald’s sponsored race car has not won a race since 1994, 25 years ago. Larson was giving the golden arches one of its best performances in recent memory, only to fall short due to a crash, and thus, the curse lives on. To make matters worse, Larson had to come back to this…

Came back to this after I crashed today…. @LorraBowyer was stressing me out!! pic.twitter.com/d6gUGw19KQ