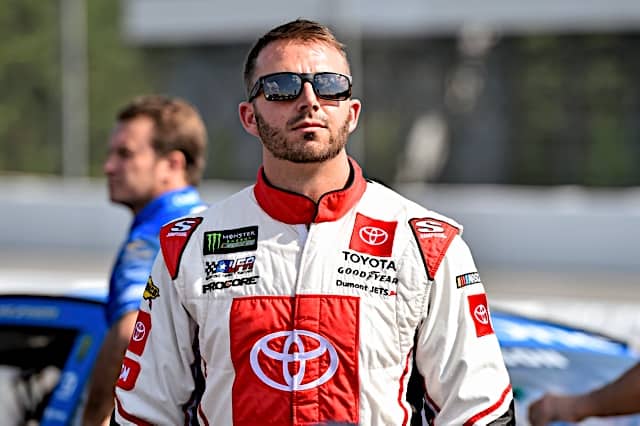 As pumpkin spice takes over everything, another NASCAR season is nearly over, with more than two-thirds of the races already on the books. But there’s still some racing left to be done, and there’s plenty to talk about. Some storylines are just now writing their opening sentences, but they’re going to be worth watching as the playoffs get underway.

And the playoffs provide only some of the stories to watch.

The days might be shorter, but things are just heating up around here …

1. Can an old-school racer get a new-school win?

Matt DiBenedetto is a great fit for Wood Brothers Racing, NASCAR’s oldest active team. He came through the ranks the hardscrabble way it used to be done: racing local tracks for a family-owned team, getting noticed by a big team only to be dropped later. Then he took any ride available and did everything he could to make sure people noticed him because they weren’t going to notice money he couldn’t bring.

This year, DiBenedetto landed at Leavine Family Racing, a team just beginning to show promise, especially on the heels of a technical alliance with powerhouse Joe Gibbs Racing. DiBenedetto has given LFR the best season it’s ever had, coming a dozen laps from a win at Bristol two weeks ago before succumbing to a faster car.

Can DiBenedetto bring LFR a win before the season is out?  If he can, it would certainly be a popular victory for the driver, and one the team has worked toward through some very lean years. But will JGR, with four cars in the playoffs and control over the LFR seat for 2020, give the team the equipment it needs to win now? If DiBenedetto can get it done, it’ll be a memorable one.

2. And can Paul Menard make it two for a career?

It’s hard to say anything really negative about Menard. While it’s true that his family money paved the way for him to race, he’s made the most of the opportunity and had a solid career. He hasn’t been a top-10 driver, but he’s been a workhorse of a mid-pack driver, racing mostly for mid-pack teams. In other words, he’s done what should have been expected of him.

Menard’s only win came at Indianapolis, driving for Richard Childress Racing, one of a modest five wins for RCR that year. The organization only has eight wins since, so he is hardly alone in being mid-pack with the team.

With just four top 10s this year, it is unlikely that Menard will win a second race before he walks away. But he walks away from a decent career, one he earned. He’s leaving the No. 21 with a sponsorship package for next year, and he has earned and deserves a heartfelt send-off from fans at Homestead.

Perhaps no driver has been better in recent years at performing under pressure than Jimmie Johnson. Time and again when the chips were down, he would be at his best, driven to meet and exceed expectations.

But now, the pressure is off. Johnson missed the playoffs for the first time ever this year. And that leaves the best driver of his generation in a situation he’s never been in: without a title to fight for.

Obviously that’s not the situation Johnson was hoping for, but it has an interesting other side. He doesn’t have to think about Homestead or risk vs. reward in making it through rounds. Next weekend doesn’t matter. All that matters is the here and now. And that could make him incredibly dangerous.

He has had speed in recent weeks, and more importantly, has driven like vintage Johnson, showing that the issue was never behind the wheel. If the No. 48 team can put a car capable of winning under him, Johnson can play the spoiler somewhere along the line.  No, he’s (probably) not going to go on a tear and win five races. But with the need for anything else erased, it’s suddenly a different game for Seven-Time.

Oh, yeah, the playoffs are happening. But with no clear individual frontrunners (as an organization, JGR is certainly the favorite), will someone break out at the right time, forcing himself into the conversation as a favorite?

Kyle Busch should be a heavy favorite, but he hasn’t been at the top of his game since winning at Pocono in June. Oh, he’s been very good, posting a slew of top 10s and top fives, but he leaves the conversation open for several other drivers on a weekly basis, where early in the season, he was the conversation. Teammate Denny Hamlin has been surging, but the question mark is whether he can close the deal.

Defending champion Joey Jogano is fast but not dominant. Then again, you could say that about him at this time last year. Kevin Harvick has been streaky and Stewart-Haas Racing hasn’t set the world on fire like they did in 2018.

So does all this open the door for someone else? It could.  Veteran Kurt Busch hasn’t screamed title favorite, but he’s also done nothing to suggest dismissing his chances. What about Brad Keselowski, who has three wins this year but none since May? Could another driver hit a hot streak at exactly the right time? That possibility is something the playoff format does provide, and this year, in particular, the last 10 chapters of this story don’t really feel prewritten.

5. Where will things get wild?

We have seen some fireworks in the playoffs in recent years. From a follow-the-leader crash in turn one at the Charlotte road course to Johnson’s last-ditch attempt to win it, to Logano’s perfectly timed bump-and-run at Martinsville that gave him a shot at the title he eventually won (to say nothing of Talladega, which always produces mayhem), fans will be treated to some exciting racing this fall.

Overall, while this year’s aerodynamic package hasn’t set the NASCAR world on its ear, it has been an improvement over a year ago, and the sport is seeing a modest uptick. An exciting playoffs would be icing on the cake for NASCAR, even if it is a homemade number from a boxed mix. Any cake is good cake. So, while (almost) nobody wants to see 10 wreckfests, a few well-fought, unpredictable races will provide a solid ending to what has been a decent year.

Which creates another question, how in the world will NASCAR back in the Most Popular Driver and Chevrolet into the Championship 4? Let’s see, Denny Hamlin and Kevin Harvick, uncontrolled tires, speeding on pit road, a bolt that should have been stainless steel and it was sheet metal.
They had him in at Phoenix last year until someone slid across the track, collecting him as he was riding around.
And, before we say NASCAR would do that, what about Eric Gregg’s strike zone when the Braves and Marlins were fighting for a playoff spot? Or, has anyone seen how many times linemen hold around Tom Brady or how they let Denver pound Cam Newton after he threw the ball in Super Bowl 50 so Peyton could win one more?
And Shaq and MJ traveling and bowling over someone else.
Pro sports is entertainment. Gambling keeps them honest but remember that.

How many times will the talking heads say J-Jo DIDN’T make it?