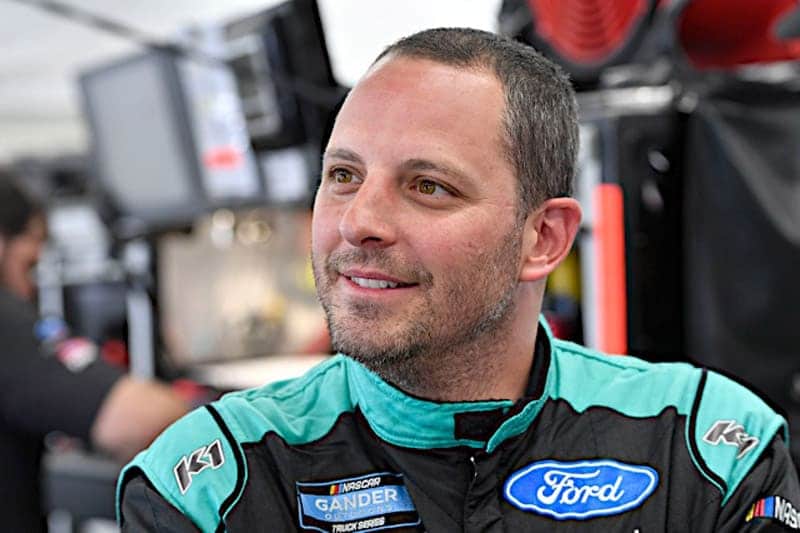 Just one year ago, as the Gander Outdoors Truck Series headed to its third and final race in the Round of 8, Johnny Sauter comfortably led the point standings. He was well above the cutoff line to make it into the Round of 6 despite not having a win in the first two races of the playoffs, thanks to finishes of sixth and second at Canadian Tire Motorsports Park and Las Vegas Motor Speedway, respectively. Of course, he also had the playoff points earned from five race wins before the playoffs began.

Fast forward to 2019, Sauter heads into Friday night’s (Sept. 13) cutoff race at Las Vegas in danger of being eliminated. He currently sits seventh in the standings, two points below the cutoff line. Aside from Brett Moffitt, whose two victories to open the Round of 8 lock him into the Round of 6, no other driver will be able to clinch their way into the next round until the checkered flag flies Friday night.

Ross Chastain is probably in the most comfortable position of the remaining seven playoff drivers with a 28-point cushion over Sauter. Meanwhile, Stewart Friesen, Matt Crafton, Austin Hill and Grant Enfinger sit within six points of Sauter, leaving plenty of shuffling up in the air, especially with a maximum of 20 additional stage points on the line. Then there’s Tyler Ankrum, who’s currently 12 points behind Sauter and a far-from-insurmountable 14 points behind the cutoff line.

“Las Vegas is a must-win situation mentality,” Sauter said following a sixth-place finish at Canadian Tire Motorsports Park on Aug. 25, the last time the series raced. “That’s what I’m going to do, and I know my guys will, too.”

And while it’s not necessarily a must-win setup by any means, the only way to truly control the team’s destiny is to settle for nothing less than victory lane. After all, the six-point margin separating third through seventh means even the slightest slip from any of those drivers is an opportunity for the No. 13 team to capitalize.

Sauter’s performance in 12 previous races at Las Vegas isn’t exactly bad either. He’s got one win, six top fives and nine top 10s, including a pair of runner-up results last season. Additionally, he hasn’t finished outside the top 10 at the mile-and-a-half oval since 2015. Matching the eighth-place result he posted earlier this year at the track likely isn’t enough, especially since he failed to earn a single stage point throughout that race, but it’s hard to count him out right now, especially with crew chief Joe Shear Jr. atop the pit box.

In a season that hasn’t been very kind to Sauter, he has just three top 10s since his only win this year at Dover International Speedway in May. And perhaps what’s more alarming in that 12-race stretch is that five of those finishes have been outside even the top 15. That’s not the kind of momentum a team racing for the championship needs.

At this point, Sauter is dangerously close to posting his worst season since returning to the Truck Series full-time in 2009. It was 2012 when he had just two wins, six top fives and nine top 10s in 22 races. Eighteen races into this year, Sauter has the single win, three top fives and eight top 10s. And the average finishes between the two seasons are similar: 13.8 in 2012 and 12.4 this year. In fact, his current average finish is his worst since that 2012 season.

But don’t give up hope, Sauter fans. In fact, during his championship run in 2016, Sauter won the season-opener at Daytona International Speedway and was locked out of victory lane through the first round of the playoffs. Back-to-back wins at Martinsville Speedway and Texas Motor Speedway in the Round of 6 put him in the Championship 4 and a third-place result at Homestead-Miami Speedway was enough to win the title.

The catch here, though, is that his overall finishes were substantially better leading up the playoffs then, giving his team a lot of positive momentum.

Add in that this year’s championship contenders have posted strong finishes in the first two races, and you can understand why he’s currently in a precarious position. I’m not saying Sauter is at all out of this championship battle, but he and the No. 13 team are going to need to dig deep and find some magic to shake off what has been a difficult season, at best, if they want to keep their title hopes alive another round.