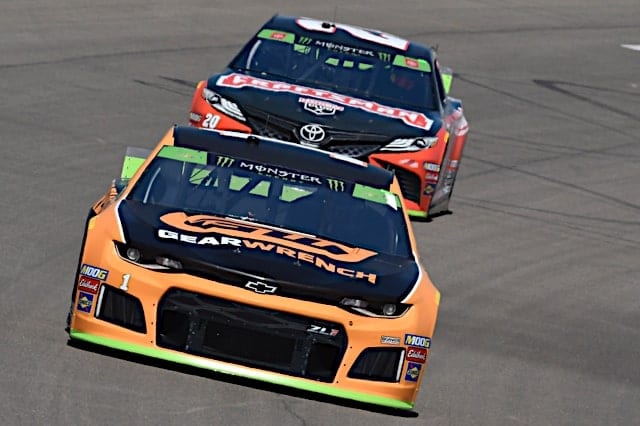 The Monster Energy NASCAR Cup Series teams prepared their vehicles in a pair of practices for Sunday’s South Point 400 at Las Vegas Motor Speedway. Clint Bowyer took the top speed of 178.059 mph in the first session, while Kurt Busch snagged the highest spot in the closing minutes of final practice. He went 177.276 mph over the field.

Hendrick Motorsports teammates William Byron and Jimmie Johnson had the second- and third-fastest lap speeds, going 177.223 and 177.148 mph in the session. Roush Fenway Racing’s Ricky Stenhouse Jr posted the fourth-quickest lap of 176.748 mph. Austin Dillon, driving the No. 3 Chevrolet for Richard Childress Racing, rounded out the top five with a lap speed of 176.684 mph.

Brad Keselowski was the lone Team Penske driver in the top 10 that session with the sixth-fastest lap time. He’s the defending winner of this event. Joe Gibbs Racing’s No. 11 Toyota of Denny Hamlin was seventh, while Germain Racing’s Ty Dillon was eighth-fastest. Bowyer’s SHR cohort Daniel Suarez was ninth, and Chase Elliott finished up the top 10 fastest drivers.

All 39 drivers entered for the race posted a lap time, but just 12 ran at least 10 consecutive laps. Of those racers, Byron had the fastest average speed of 175.968 mph. Austin Dillon was the only other one to average above 175 mph, while Alex Bowman, Martin Truex Jr and Kyle Busch were third through fifth.

Debris brought out the caution with about 20 minutes left in the period. This was the only issue that stopped on-track activity.

After struggling with handling issues in the car, Kurt Busch grabbed the fastest lap time over Joey Logano in the closing minutes. Logano went 176.783 mph, while Penske teammate Keselowski’s 176.321 lap speed was third-quickest in the session. Elliott went 176.223 mph for the fourth-fastest lap, and Ryan Blaney rounded out the top five with a lap time of 176.114 mph.

Many drivers ran at least 10 consecutive laps in final practice — 24 of them to be exact. Kyle Busch held the quickest average with a speed of 175.106 mph. Elliott had the second-fastest average speed of 174.905 mph, while Logano’s average was 174.897. Erik Jones and Harvick were close behind, averaging 174.891 and 174.857 mph respectively. Hamlin, Keselowski, Newman, Johnson and Bowman held the sixth- through 10th-fastest lap averages.

No incidents were reported in the session.

Qualifying for the first race in round one of the MENCS playoffs is set to go at 4:05 p.m. ET on Saturday, Sept 14. The South Point 400 will air Sunday at 7 p.m. ET on NBC Sports Network.