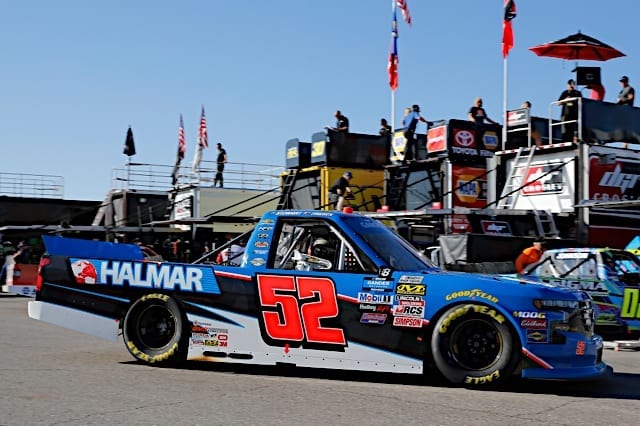 The NASCAR Gander Outdoors Truck Series returned to the track in preparation for the World of Westgate 200 at Las Vegas Motor Speedway Friday night (Sept. 13). Stewart Friesen held the fastest single lap in the lone session and posted a speed of 179.635 mph.

Friesen edged out GMS Racing’s Brett Moffitt, who has already locked himself in the next round of the playoffs with his two wins at Bristol Motor Speedway and Canadian Tire Motorsport Park. Moffitt went 179.569 mph as the second-quickest driver in practice. The No. 98 ThorSport Ford of Grant Enfinger was the third and final driver to post a speed above 179 mph. Moffitt’s teammate Sheldon Creed went 178.998 mph for fourth, while Matt Crafton’s 178.767 mph took the fifth-fastest lap speed.

Out of the 35 drivers to run a lap in the period, just 17 ran at least 10 consecutive laps on the 1.5-mile track. Moffitt led the way with an average lap speed of 176.238 mph. Nemechek was close behind and averaged 176.042 mph. Todd Gilliland, Crafton, and Tyler Ankrum finished with the top five fastest averages.

There was one stoppage for debris near the end of the session.