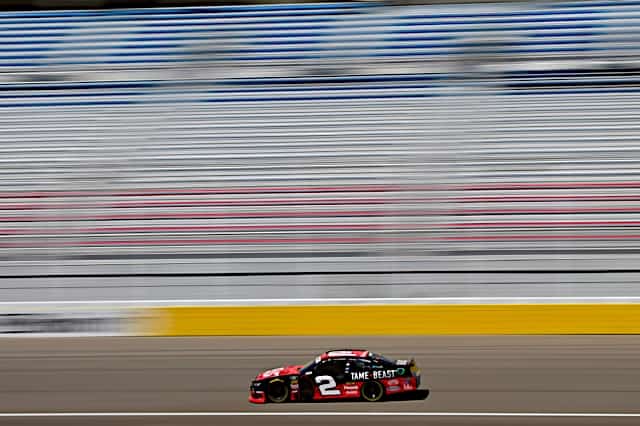 The Xfinity Series playoffs are just around the corner. Drivers and their teams prepared for the final race of the regular season in a pair of practices for Saturday’s (Sept 14) Rhino Pro Truck Outfitters 300 at Las Vegas Motor Speedway.

Tyler Reddick was the fastest driver in both sessions; he went 176.131 mph in the first and 175.664 mph in the final period of the afternoon.

Reddick was more than three-tenths of a second faster than the second-place car of Chase Briscoe, who went 175.781 mph. Team Penske’s No. 22 Ford of Austin Cindric was third-quickest with a single lap speed of 175.256 mph. John Hunter Nemechek was the fourth and final driver above 175 mph, and Brandon Jones’ 174.938 lap speed rounded out the top five.

Noah Gragson and his JR Motorsports teammate Ryan Truex were sixth- and seventh-fastest. The other two of the big three, Cole Custer and Christopher Bell, held the eighth- and ninth-quickest lap speeds. Ryan Sieg rounded out the top 10.

Nearly all of the drivers posted a lap time, save for Joe Nemechek who’s entered in the No. 17 car for Rick Ware Racing. Of those drivers, just two ran at least 10 consecutive laps: Michael Annett averaged 168.041 mph, while Cindric had an average speed of 157.702 mph.

No incidents were reported in the session.

Cindric, Briscoe were seventh- and eighth-quickest in the period with Justin Haley close behind in ninth. Landon Cassill, filling in for Morgan Shepard, finished up the top 10 fastest lap speeds.

This time 11 racers ran at least 10 straight laps. Of those, Bell, Reddick, and Allgaier all averaged above 172 mph.

There were a couple of incidents during the session and one that required stoppage time. Annett spun around and reported something broke in his car; NBC Sports reported it was a right rear shock shaft.

The caution came soon after when Kyle Weatherman’s car laid down some fluid on the track.

Qualifying for the Rhino Pro Truck Outfitters 300 is set to get underway Saturday, Sept 14 at 2:30 p.m. ET. The race will begin at 7:30 p.m. ET with TV coverage from NBC Sports Network.