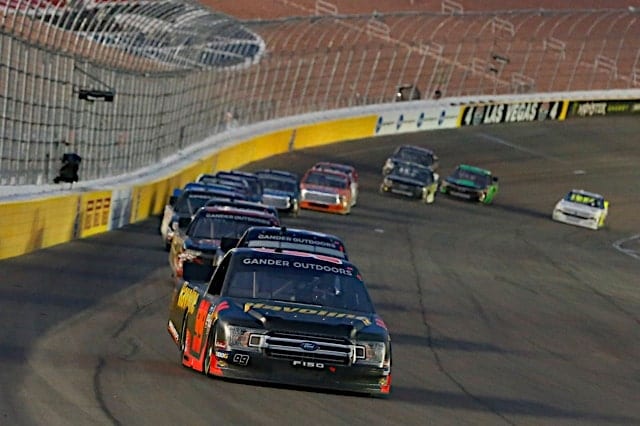 After all three of the team’s NASCAR Gander Outdoor Truck Series playoff trucks saw their nights go up in literal smoke, Rhodes’ No. 99 Havoline Ford F-150 was the only one from that stable to finish at LVMS. He crossed the line in eighth, notching his 12th top 10 of the season.

But that was small consolation for a team still winless in 2019.

“Even though it was an eighth-place finish, decent showing,” Rhodes said post-race. “Overall, our Havoline Ford was good. We just needed track position, for one, and two, we made the wrong call on the last pit stop. We stuck with no tires and four tires ended up winning the race. Not the finish we wanted or had the speed for, but it was a hard-fought race for us all night.”

Rhodes had to feel just finishing was an accomplishment for a Thorsport organization plagued by motor trouble. First, it was regular season champion Grant Enfinger on Lap 6. Then, it was Matt Crafton and Johnny Sauter on the same straightaway on Lap 41. All three blew engines which, naturally, left Rhodes feeling a bit helpless.

“I saw the first one and was like ‘man, that’s really bad.’ I saw the next two immediately at the same time on the same exact lap, same straightaway right in front of me, and that really concerned me,” he said. “I said ‘I’m about due in two laps,’ and I was getting a little amped up on the radio wanting them to go figure out what the issues were, go get me some information. I can’t do anything, I’m along for the ride.

“Low and behold, it stayed together, very thankful for that.”

SEGAL: THORSPORT ISSUES GIVE TYLER ANKRUM A WAY TO THE ROUND OF 6

Las Vegas isn’t the first time engine issues have struck ThorSport. Just a few months ago, Rhodes’ race at Chicagoland Speedway was over before it even began, part of a hard-luck summer that cost him a playoff spot.

This time, it was three drivers in the first two stages.

“I think it’s the same exact thing that’s been happening,” he said. “That’s nothing that we can control. It comes from them (Ilmor), but it seems like a lot of people had motor issues tonight. I don’t know if I necessarily had all the power that I should have, either.”

Rhodes wasn’t told much over the radio after his three teammates had their evenings end early.

“They said ‘watch your gauges,'” he explained with a laugh. “I said, ‘that’s a lot of help,’ so I don’t know if they were trying not to freak me out or what was going on, but I watched my gauges and it looked great. That’s all I’ve heard so far. Looking forward to getting back to the shop to see what the issue is, because we need to get that fixed. That’s ridiculous to have two trucks go out of the playoffs like that over something we can’t control.”

With one month until the next NASCAR Gander Outdoors Truck Series event at Talladega Superspeedway, Rhodes anticipates some tough conversations ahead.

“We gotta get with NASCAR, get everybody involved and figure out why these engines aren’t holding together,” he said. “It’s been a recurring thing for our team this year. It’s happened to me once, but my teammates more often than not. Glad mine stayed together.”

So who eats the cost when a leased Ilmor motor blows up? They (Ilmor) should have to guarantee the quality of the engine for (insert number here) of races. But I bet the teams eat the cost, which makes the idea of a spec motor a bad one.