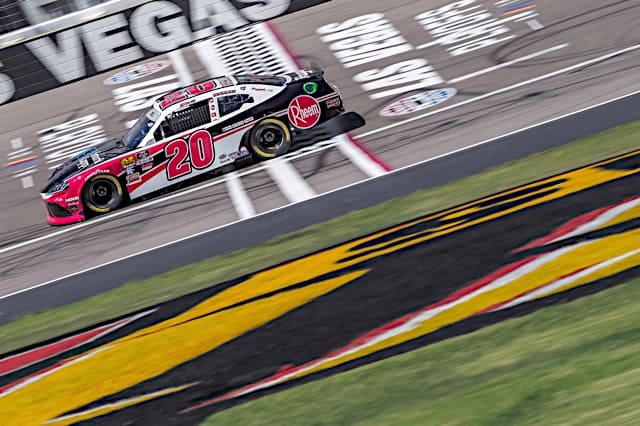 For the third time this season, Christopher Bell led the most laps, but didn’t wind up victorious.

The six-time winner this season in the NASCAR Xfinity Series came up one spot short in Saturday (Sept. 14) night’s Rhino Pro Truck Outfitters 300 at Las Vegas Motor Speedway. Bell lost out to Tyler Reddick, who stretched his fuel over 70 laps to earn the victory.

“I didn’t think anyone could make it,” he said of Reddick’s strategy post-race. “I mean, once they told me the No. 98 (Chase Briscoe) sped on pit road, I kind of thought the race was ours unless the yellow came out. Then they said (Reddick) was going to try and make it, and they’re like, ‘we’re catching him, we’re catching him,’ and I was getting worried because I couldn’t see him. He did enough to beat us today.”

Bell led a race-high 154 laps in the event, won both stages (15 on the season), but it wasn’t enough. He was understandably frustrated at the runner-up finish.

“That’s two times that we got beat this year just because – I feel like we had the best car and the other guys do the opposite of us,” he said. “It freaking sucks. Nothing else to say.”

The other time he referenced came at Iowa Speedway in July, where Bell led a race-high 234 laps but was passed by Briscoe with under 10 laps remaining to earn the victory.

“Whenever you have opportunities to win the race and you don’t win, that’s what sucks,” he said. “Whenever you have 10th-place cars and you run fifth with them, it doesn’t sting as bad. Today, we had a winning car and we did not win.”

After Iowa, Bell was adamant there was nothing else he could have done, becoming a victim of circumstance. This time, however, he feels things may have wound up differently if he pushed harder earlier.

“At the beginning of that run after the green-flag stop, I definitely wasn’t running as hard as I could have,” he said. “I don’t know if it was – I mean, 0.7 seconds over 30 laps is not much. Maybe I could have gotten there, but I just thought it was over.”

Bell enters the playoffs as one of the Xfinity Series Big Three, paired with Reddick and Cole Custer. His performance on Saturday, as well as throughout 2019, speaks for itself as championship caliber. He believes if they don’t change a thing, they’ll be sitting pretty come Homestead-Miami Speedway in November.

When asked if no one else could challenge the aforementioned Big Three, Bell kept his thoughts short and sweet.

The playoffs are set to begin next weekend at Richmond Raceway, where Bell has won twice and finished 16th earlier this season after leading 32 laps.