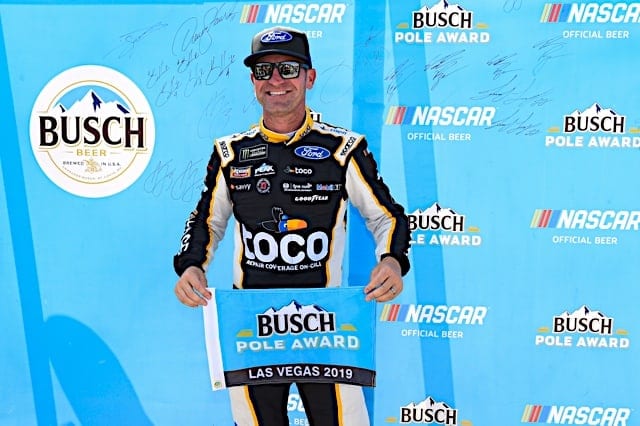 Stewart-Haas Racing sure brought some lightning-fast Fords to Las Vegas Motor Speedway. Clint Bowyer ran the fastest lap in qualifying for Sunday’s (Sept. 15) South Point 400, part of a 1-2-3-4 sweep for a SHR organization looking to jumpstart their 2019 season.

.@ClintBowyer wins the pole for tomorrow’s Cup race at @LVMotorSpeedway.

It’s his first pole since the 2007 playoff opener. Anyone remember how that race went? He dominated, en route to his first career win. #NASCAR

Richard Childress Racing cohorts Daniel Hemric and Austin Dillon will start sixth and seventh on Sunday. They were also the fastest Chevrolets in the field. Behind them, a pair of Hendrick Motorsports teammates, Chase Elliott and Jimmie Johnson, qualified eighth and ninth. The final driver who qualified in the top 10 was Front Row Motorsports’ Michael McDowell, who also was the last driver with a lap speed above 177 mph.

Further back, Erik Jones was the slowest of the 16 playoff drivers, qualifying a distant 26th. No Toyotas will start inside the top 10; Denny Hamlin was the fastest of the group in 13th.

Since just 39 cars were entered for the race, all teams qualified who made an attempt. Joey Gase will bring up the rear driving for MBM Motorsports with a time 1.9 seconds slower than pole sitter Bowyer.

INSIDE THE SOUTH POINT 400 STARTING LINEUP

You forgot to mention bubba, your close to being fired for that. He starts 31st

How long will it take for Clint to spin out? Wonder what the over/under is in Vegas?

kuku
Reply to  Bill B

Did Clint win ! How many laps did he lead ! Bonus points ! Yeeehaw, qualifying means everything huh frontstretch.