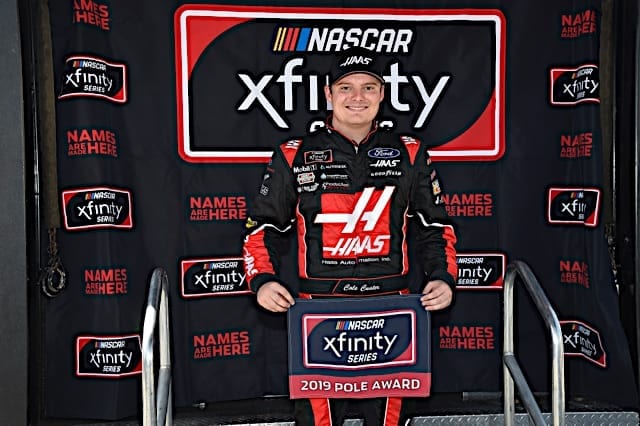 Cole Custer will start on the pole for the NASCAR Xfinity Series’ 2019 regular season finale. The Rhino Pro Truck Outfitters 300 will go green at 7:30 p.m. ET on Saturday, Sept. 14 with TV coverage provided by NBCSN.

Custer’s Stewart-Haas Racing No. 00 turned the fastest lap at 181.372 mph while Joe Gibbs Racing’s Christopher Bell will start second after a lap of 181.056 mph.

JGR’s Brandon Jones in sixth, while Chase Briscoe lines up seventh. Elliott Sadler, who is piloting the Kaulig No. 10, will start eighth. The Las Vegas race will also serve as Sadler’s last in NASCAR as a driver.

Landon Cassill qualified a surprising ninth in Morgan Shepherd’s underfunded No. 89. The team, unfortunately, still plans to start-and-park in the event. Justin Haley rounded out the top 10 for Kaulig Racing.

This Q run by @landoncassill needs to be in the HOF of Q runs. @LVMotorSpeedway @XfinityRacing

Hometown driver Noah Gragson spun his JRM No. 9 on his qualifying lap, slightly damaging the car and failing to post a time. He will start at the rear of the field after changing tires.

John Hunter Nemechek, who drives for GMS Racing, will start 13th at his team’s home racetrack.

Since only 38 drivers were entered, everyone made the race. No Cup drivers are in the field.

The top 12 in points have all but clinched a postseason spot. For Gray Gaulding and others on the outside looking in, they’ll need to win Saturday night in order to make the playoffs.