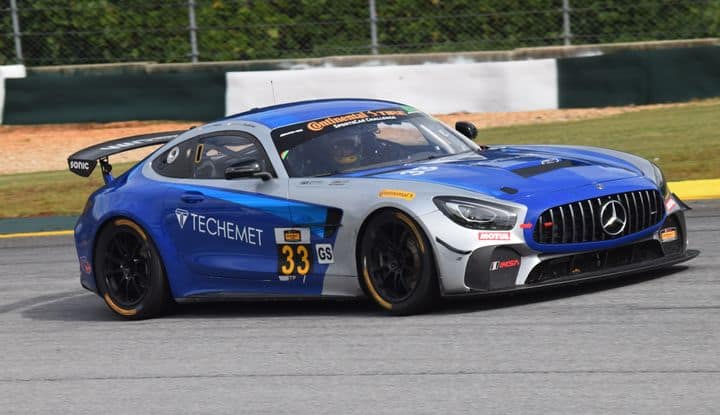 Dominik Baumann, driving in place of regular driver Indy Dontje, used a strategy that saw the Winward Racing/HTP Motorsport team put on rear tires on their final pit stop.  That proved to be the winning move in the WeatherTech Raceway Laguna Seca 120 Saturday (Sep. 14).

The strategy got Baumann out in front of CarBahn Motorsports.  Baumann then ran down Park Place Motorsports’ Trent Hindman and passed him for the lead with six laps to go.  From there, Baumann pulled away to take the first-ever win for the team in Michelin Pilot Challenge competition.

CarBahn Motorsports’ Tyler McQuarrie started from the pole and appeared to be the man to beat early on.  Compass Racing’s Paul Holton gave chase, but was forced to pit early due to a minor vibration.  Over the first 35 minutes of the race, McQuarrie stretched his advantage over the rest of the field to nearly 10 seconds.

Further back, the man on the move was KohR Motorsports’ Nate Stacy.  Stacy originally qualified fifth, but had his time disallowed due to failing to met the minimum ride height in post-qualifying inspection.  From the rear of the field, Stacy quickly charged up into the top 10.  Russell Ward was also strong early.  He spent a significant chunk of his stint in the car fighting for third with Motorsports In Action’s Jesse Lazare before eventually winning the battle.

Contact between JDC-Miller MotorSports’ Michael Johnson and KMW Motorsports with TMR Engineering’s Ryan Nash in turn 2 resulted in significant damage to both cars.  Johnson ended up pulling over, which brought out the race’s first full course caution.

The pits opened just after the 40-minute mark, meaning all drivers that started the race would get full points for their time in the car.  As a result, everyone pitted for four tires, fuel and a driver change.  McQuarrie exited the No. 39 Audi in favor of Jeff Westphal.  Westphal won the race off pit road, then immediately picked off Mark Ramsey for the lead on the restart.

Ramsey had chosen not to pit in his Mercedes.  It was a poor decision as everyone else was on fresh tires.  Fresh tires were worth as much as five seconds a lap at times Saturday, so Ramsey dropped like a stone.

After the restart, the field was all bunched and running three-wide coming up to the Corkscrew.  Contact was made, resulting in PF Racing’s Jade Buford spinning across Ramsey’s nose and nearly rolling over.  Compass Racing’s Kuno Wittmer was also involved in the crash, which brought out another caution.

Everyone was able to drive back to the pits, but all three teams went behind the wall.  Compass Racing and Ramsey Racing were out on the spot, while PF Racing made suspension repairs that allowed Buford to finish 31 laps down in 32nd overall.

Shortly after the restart, teams began making their final stops of the race.  While teams such as TeamTGM stopped as early as lap 38, others waited quite awhile.  Westphal stayed out until lap 47 before making his final stop.  At that time, there were 38 minutes to go.  Baumann made his final stop three laps later.  Here, Baumann took only rears, which put him right behind Westphal.  Shortly after getting back on track, Baumann was able to get past Westphal and pulled away.

Riley Motorsports attempted an alternate strategy and left Dylan Murry out to try to steal the victory.  However, GT4 cars cannot run 78 minutes on a tank of fuel.  With 10 minutes to go, Murry was forced to pit for a splash, giving the lead to Hindman.  The Park Place Motorsports team had chosen to pit twice during the first caution and put Hindman in the car during their second stop to top off their gas.

The Park Place team had decided to try to go the distance from there, meaning that Hindman had to conserve fuel in order to make it to the end.  As a result, Hindman was no match for Baumann.  Once out front, it was an easy run for Baumann to victory.

Baumann and Russell Ward’s margin of victory was 2.786 seconds over Westphal and McQuarrie.  Hindman and Alan Brynjolfsson just barely held onto third, but did make it to the finish.  Moorespeed’s Rob Ferriol and Spencer Pumpelly finished a strong fourth, while Murry and James Cox recovered for fifth after their late stop.

In TCR, it was a Bryan Herta Motorsport party early on.  Michael Lewis won the pole and promptly drove away from the rest of the class.  Meanwhile, Fast MD Racing’s Nick Galante was able to get past Mason Filippi early on and took second.  Once the tires came up to temperature, Filippi was able to get him back.

It was only after the first caution that things began to heat up.  First, the No. 21 Hyundai with Harry Gottsacker at the wheel was able to beat his teammate Mark Wilkins in the No. 98 out of the pits.  Then, Roadshagger Racing’s Jon Morley came into the picture.

On the restart after the final caution, Morley was able to get past Wilkins for second.  A couple of laps later, he got past Gottsacker and took the lead.

Once out front, Morley was able to open up a substantial gap on the rest of the class.  However, 76 minutes on fuel was a little longer than a lot of the teams could go.  In the closing laps, Morley was forced to back off a bit to conserve on gas.  That allowed Wilkins to come back into the picture.

On the final lap, Wilkins ran down the No. 61 Audi thanks to slower traffic.  Morley went a little wide exiting the final turn, giving Wilkins a chance to drag race past.  Morley was able to hold off this final charge to give himself, teammate Gavin Ernstone and Roadshagger Racing their first-ever win in the Michelin Pilot Challenge.

Morley and Ernstone ended up just a quarter of a second ahead of Wilkins and Michael Lewis.  LA Honda World Racing’s Shelby Blackstock and Tom O’Gorman finished third in their Honda, followed by KMW Motorsports with TMR Engineering’s Roy Block and Tim Lewis Jr.  Atlanta Speedwerks’ Todd Lamb and Brian Henderson were fifth.

The Michelin Pilot Challenge season comes to a close on Oct. 11 with the FOX Factory 120 at Michelin Raceway Road Atlanta.  Frontstretch will be there to bring you all the action.