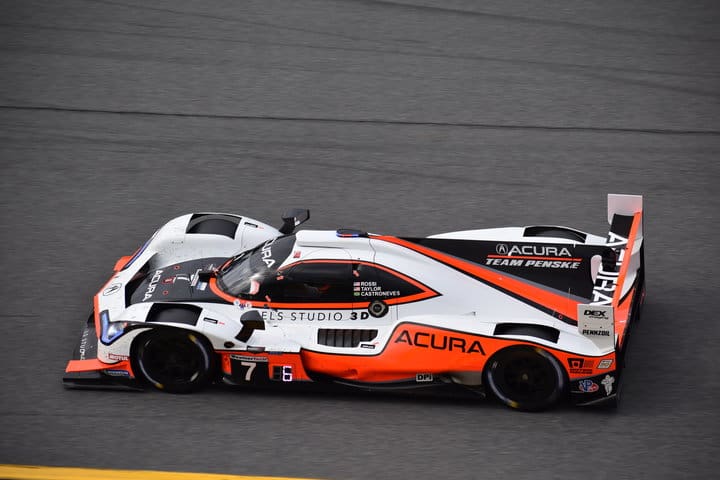 Acura Team Penske’s Ricky Taylor won the overall pole Saturday (Sep. 14) for Sunday’s Monterey SportsCar Championship Powered by McLaren with a lap at 107.374 mph.  The Laguna Seca pole is Taylor’s first since joining Acura Team Penske at the beginning of 2018. It’s also the No. 7 Acura’s second pole of the season.

Taylor’s lap was three-tenths of a second faster than teammate Juan Pablo Montoya in the No. 6 Acura, giving Acura Team Penske a sweep of the front row.  Jordan Taylor, driving the Konica Minolta-sponsored Cadillac for Wayne Taylor Racing, qualified third.  This lap was a marked improvement over the recent pace of the Cadillacs.

Mazda Team Joest’s Tristan Nunez will start fourth in the quickest of the Mazda RT24-Ps.  Felipe Nasr, who just announced that he will be back in the No. 31 Cadillac full-time in 2020, was fifth.  In LMP2, Performance Tech Motorsports’ Kyle Masson claimed the class pole with a lap at 104.883 mph, good for 10th overall.  Masson was eight-tenths of a second faster than PR1 Mathaisen Motorsports’ Matt McMurry.

GT Le Mans qualifying was once again a tight affair.  The Porsche GT Team, in particular, had problems throughout.  Nick Tandy spun his Porsche 911 RSR early in the session exiting the Corkscrew.  In an attempt to keep from damaging his tires, Tandy rolled his car down the hill and through Rainey Curve in reverse before pulling off into some paved runoff and getting back going in the right direction.  Tandy ended up qualifying eighth in class.

During the session, the quick time went back and forth between Corvette Racing and Ford Chip Ganassi Racing IMSA.  However, in the closing minutes of the session, BMW Team RLL’s Jesse Krohn turned in a lap at 98.788 mph.  That time held up to give Krohn the class pole in 13th overall.

Krohn’s lap was one-eighth of a second faster than Ford’s Dirk Muller.  Tom Blomqvist in the second BMW was third, followed by Porsche GT Team’s Laurens Vanthoor.  Ryan Briscoe will start fifth in the second Ford GT.  The entire class was separated by less than three-quarters of a second.

The GT Daytona field came very close to being set on points.  IMSA rules require that in a regular 15-minute qualifying session, at least 10 minutes must be run under green.  Seven minutes into the session, Park Place Motorsports’ Patrick Lindsey spun and crashed hard exiting turn 10.  Lindsey walked away uninjured, but the crash resulted in a red flag.  The crash was so bad the tow hooks were ripped off the car, making removal difficult.

Despite those difficulties, track crews were able to remove Lindsey’s Porsche from the track quick enough for enough time to elapse to make the session official.  In those final couple of minutes, Paul Miller Racing’s Corey Lewis won the class pole with a lap at 94.828 mph in his Lamborghini.

Lewis’ lap was one-tenth of a second faster than Meyer Shank Racing with Curb-Agajanian’s Trent Hindman.  Hindman had been fastest prior to the red flag and would have claimed the pole on points had the session not continued.  Scuderia Corsa’s Cooper MacNeil qualified third in his Ferrari despite not going back out after the red flag.  PFAFF Motorsports’ Zacharie Robichon was fourth while Turner Motorsport’s Robby Foley rounded out the top-five qualifiers.

As per IMSA rules, bringing out the red flag cost Lindsey his fastest lap, which was his only lap on pace.  As a result, he ends up with no time for the session.  If the No. 73 Porsche can be repaired in time for the race on Sunday, Lindsey will have to start at the rear of the field.

The Monterey SportsCar Championship Powered by McLaren is scheduled to go green at 3:10 p.m. Sunday afternoon.  Live coverage of the race is scheduled to start at 3 p.m. on NBC.