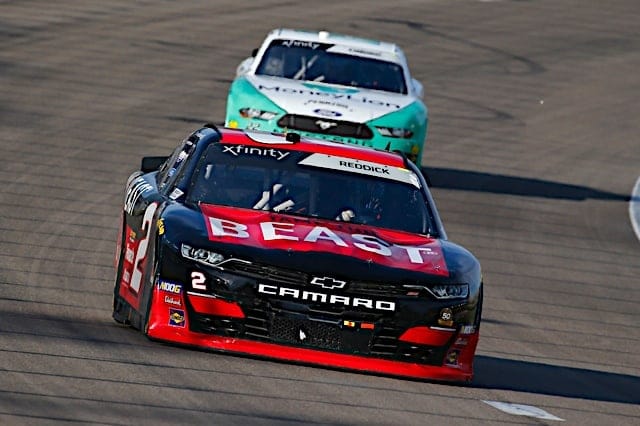 Christopher Bell was in a league of his own for the first 150+ laps of Saturday’s NASCAR Xfinity Series race at Las Vegas Motor Speedway. He won both stages of the Rhino Pro Truck Outfitters 300 and proved all but untouchable up front despite the best efforts of Justin Allgaier, pole sitter Cole Custer and Chase Briscoe. No one was going to beat the No. 20 in a straight fight.

Enter strategy and Tyler Reddick. The No. 2 team, which clinched the regular season championship prior to the end of the second stage, played the contrarian when the yellow flew on lap 128 after C.J. McLaughlin pounded the turn 3 wall. Reddick, whose car needed repairs after scraping the concrete, pit under that yellow while the leaders stayed out. Capitalizing on a long green-flag run that saw the race go green from that lap 128 caution to the finish, Reddick went out front when the leaders made green-flag stops between laps 165 and 175.

Holding a more than 10-second lead with 25 laps to go, Reddick proceeded to save fuel as Bell carved back through the field. And though Bell made up 10 seconds in the final 10 laps, Reddick managed a car that he stated was sputtering over the last three laps to the checkered flag, scoring his fifth win of the 2019 season.

Said Reddick’s owner of his driver in victory lane, he [Reddick] “reminds me of Cale Yarborough.”

Reddick’s win derailed what was looking to be a banner night for Joe Gibbs Racing. Bell led more than 150 laps Saturday, while both Jones and Riley Herbst equaled their season-best finishes with top-10 runs. Meanwhile, team owner Gibbs was back east in Indiana, watching Ty Gibbs score a dominant win in the ARCA race at Salem Speedway.

With Reddick locked into the playoffs before Saturday’s race, there was no bubble drama in the Xfinity Series playoff race, with John Hunter Nemechek and Ryan Sieg taking the final spots in the 12-team postseason field.

Las Vegas native Noah Gragson persevered through a qualifying spin and two scrapes with the wall to finish sixth. Elliott Sadler had a quiet night in his final Xfinity Series start, finishing 10th despite being lapped during the first stage.