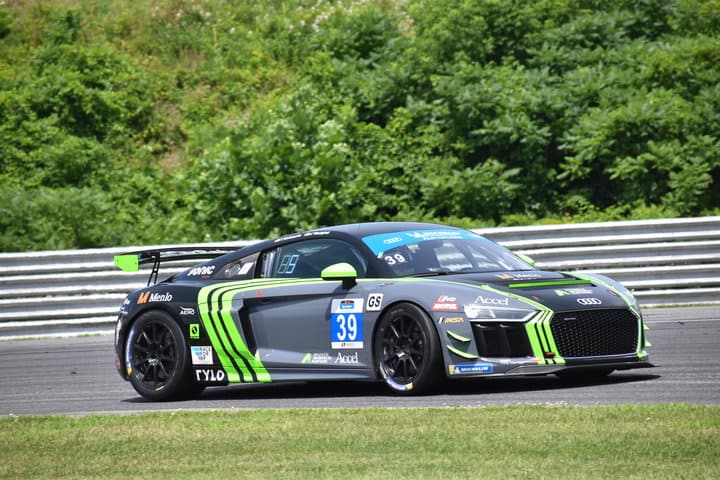 CarBahn Motorsports’ Tyler McQuarrie won the pole Saturday (Sep. 14) for the IMSA Michelin Pilot Challenge WeatherTech Raceway Laguna Seca 120 with a lap at 88.657 mph.  It is McQuarrie’s second pole in as many qualifying sessions and will mark the third straight race that he will start from the overall pole.  Qualifying at VIR in August was cancelled due to thunderstorms and McQuarrie claimed the pole thanks to points.

In eight qualifying sessions so far this season, McQuarrie has only qualified worse than fifth once.  That race was Mid-Ohio, which featured a somewhat bizarre qualifying effort held in changeable conditions.

McQuarrie’s pole lap was nearly eight-tenths of a second faster than Compass Racing’s Paul Holton in the No. 75 McLaren.  Jesse Lazare will start third in a similar McLaren for Motorsports In America, followed by TeamTGM’s Owen Trinkler.  KohR Motorsports’ Nate Stacy will start fifth in his Ford Mustang GT4.

Winward Racing/HTP Motorsport’s Russell Ward will start sixth in the best of the Mercedes, followed by the Aston Martin of Automatic Racing’s Rob Ecklin Jr.  Jeff Mosing will start eighth, while Orey Fidani and Bryce Ward round out the top 10.

In TCR, Bryan Herta Autosport claimed a front row sweep.  Michael Lewis claimed the class pole with a lap at 86.535 mph in his Hyundai Veloster N TCR.  Lewis’ lap, good enough for 13th overall, was nearly a quarter of a second faster than teammate Mason Filippi.

For HART, they had a long night of work to be able to get out for qualifying.  Chad Gilsinger crashed the No. 89 Honda Civic Type-R TCR in practice on Friday, resulting in a long repair in the paddock.

Unfortunately we had an off and the car got damaged so we’re done for today. The @HARTracingteam guys are awesome and inspecting everything to make sure we’re solid for tomorrow. pic.twitter.com/ll5RzuAKe3

Luckily, repairs were successful and Gilsinger was able to get back out for qualifying.  He will start 10th in class.

The WeatherTech Raceway Laguna Seca 120 is scheduled to go green at 6:05 p.m. ET Saturday.  The race will be streamed live at IMSA.com and FansChoice.tv.