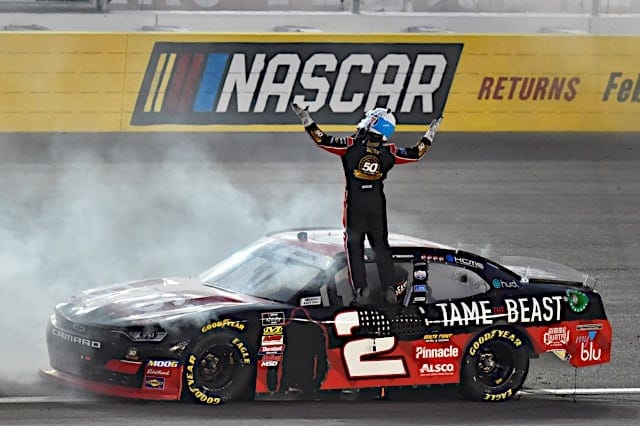 Champion boxer Gennady Golovkin likes to refer to what he does in the ring as the “Big Drama Show.” If he’s willing to share, Tyler Reddick, crew chief Randall Burnett and the No. 2 Richard Childress Racing Chevrolet team showed they deserve that label, too. This group pulled off a white-knuckle gambit to TKO  the competition in NASCAR’s Xfinity Series regular season finale at Las Vegas Motor Speedway.

Straight up, neither Reddick nor anyone else in the field had anything for Christopher Bell for most of the Rhino Pro Trucks Outfitters 300. Bell swept the first two stages and led 154 laps on the night, only once falling back into anything resembling a challenge. That came with just under 90 laps to go, burned when a strong restart by Justin Allgaier shot him to the point. Even then, it took only about seven laps for Bell to reassert his dominance.

It was clear the only roadblock that was possibly going to stop Bell from going to victory lane was if someone made a brave strategy call and had the guts to see it all the way through to its logical conclusion. Burnett and Reddick did exactly that, deciding they weren’t bringing their Chevy back to the pits after stopping on lap 130. Everyone else made a green flag pit stop during the last segment of the final stage, but the No. 2 car stayed out in seeming defiance of a gas window that would leave them short of the 70 laps they’d need to go.

Yet there was Reddick, alternately running hard and saving gas as Burnett and company asked him, running up front while his 20-plus second lead faded. Early in the dash to the finish, Bell was gaining only a few tenths per lap. But when it got down to less than 10 to go, he was chewing away at the gap to the time of nearly a second each time around.

The tension then became two-fold: Would Reddick have enough gas, and if so, could he run hard enough to avoid Bell catching him anyway? It was as exciting a finish to a race as could ever be possible in a situation where the top two cars were never close enough for one to pass the other. It also stood in direct and welcome contrast to the tame first two stages, where Bell was so good that it drained all the excitement from the event.

Even though it required him to back off in ways he normally wouldn’t, the bold plan that snatched up an unlikely first victory of 2019 for Reddick suits his no-holds-barred driving style. He’ll enter the playoffs with not just momentum (and the regular season title, for what it’s worth) but the security of knowing his team can figure out how to get him a win when he doesn’t have the fastest car. That might be just what he needs to hold off Bell and Cole Custer to defend his Xfinity Series crown.

Two drivers outside the Big Three showed that they could yet be factors before the championship trophy is handed out at Homestead. One was Allgaier, whose winless stretch has been agonizing for him. But clearly, the No. 7 team has more speed and confidence than it did early in the season. His fifth-place finish was probably a little lower than Allgaier deserved, given that he was the only driver on the night to outrun Bell for even a little bit. He might still be heard from before the book is closed on 2019.

SEGAL: ALLGAIER CONFIDENT HE CAN BE A CHAMPIONSHIP CONTENDER

The same could be said for Chase Briscoe, who wound up 11th after he was penalized for going too fast entering pit road during the final round of stops. That result doesn’t speak to how fast he was, especially in the first part of the final stage. The NBC Sports crew pointed out that he is running in the top five now almost as often as his teammate Custer, which isn’t a comparison you could have made back in March.

The first two stages were yawners of the highest caliber. Bell led all but two laps, and he averaged about a five-second lead both times he took the green-and-white checkered flag. There simply wasn’t any catching him with clean air on the front of his Toyota. With all due respect to Reddick, Custer and the other playoff competitors, that’s something Bell has in his arsenal everyone else simply doesn’t. When he checks out on the field, it can be a battle to stay awake for TV viewers.

Even worse was the lack of any kind of uncertainty over who would make the playoff field. For a season finale, there were remarkably low stakes at Las Vegas since no one could race in on points and the chances of anyone outside the top 12 winning were essentially nil. The truly bad part is that unless one of the sport’s well-funded Cup Series teams adds another car in 2020, that same situation could easily repeat itself a year from now.

Might Austin Cindric have had something for Bell or Reddick at the end? Probably not, but we’ll never know thanks to the team’s continued insistence on throwing hurdles of their own making in their own path.

After stage one, Cindric’s No. 22 Ford team had one of the most obvious uncontrolled tires you’ll ever see, with the wheel bouncing out into the middle of pit road as cars all roared out of their stalls. An undaunted Cindric managed to make his way back up through the field to come off pit road third when Tommy Joe Martins spun to bring out a caution on lap 112, only for the team to be unceremoniously handed another penalty for too many men over the wall.

Cindric finished a not-that-disastrous 12th, but he could and should have had more to show for his efforts. His bunch is already a half-step behind the Big Three and needs to have its ‘A’ game to have any hope of being alive with a chance at the championship at Homestead. To paraphrase a popular meme from a few months back, that effort at Las Vegas ain’t it, chief.

Was there one? Only six cars finished on the lead lap, all from powerhouse Xfinity Series teams. Elliott Sadler wheeled his Kaulig Racing entry to a solid 10th-place finish. But come on, he’s no underdog! Just retired….

Ryan Sieg was 14th at the end of the night, and he’ll have to do on this occasion. Better luck next week, underfunded drivers….

It’s with a slight tear in my eye that I retire this section for the season, since no Cup Series drivers are allowed to compete in the Xfinity playoff races. Until Daytona, then, we bid this feature adieu.

“That was nerve-wracking, to say the least. The last three laps I was losing fuel pressure and it was stumbling, so I didn’t think I was going to make it running the fence.” – Tyler Reddick

“We knew right there if we ran them straight up, we weren’t going to be able to outrun the No. 20 or the No. 7. … We saw an opportunity, and we were kind of thinking about it. I was really surprised a couple more didn’t come down and try that.” – Randall Burnett, Reddick’s crew chief

“I’ll tell you who [Tyler Reddick] reminds me of, and I watched him and raced against him myself, is Cale Yarborough. Watch out.” – Richard Childress

“It’s the second time this year that we got beat by circumstances. … Very, very disappointing.” – Christopher Bell

You could have been forgiven if you had nodded off during the first two stages of the Rhino Pro Trucks Outfitters 300, but you might not forgive yourself for snoozing through the last 10 laps. If nothing else, it was proof that you can’t give up on any race just because it lacks action for a while, since there’s always the chance of an intriguing final act.

The Xfinity playoffs get underway under the lights at Richmond Raceway, which isn’t a bad way to kick them off at all. Bell might be able to get immediate payback since he is the defending race winner of the GoBowling 250. That’s good because depressed runner-up Bell is no fun.