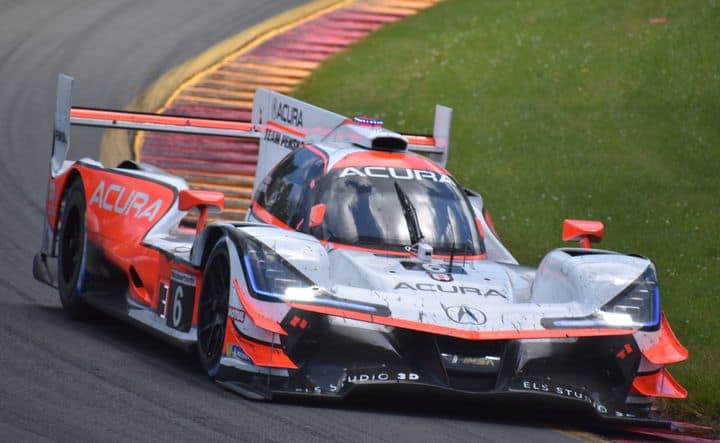 Acura Team Penske’s Dane Cameron was able to take the overall lead away from teammate Ricky Taylor 55 minutes into the Monterey SportsCar Championship Powered by McLaren Sunday (Sep. 14).  Once out front, Cameron was able to easily hold off the No. 7 Acura.  Once Helio Castroneves fell back, Cameron was able to pull away to take his and Juan Pablo Montoya‘s third win of 2019.  The lead also expanded their points lead up to 12 points with only one race remaining.

“Honestly it was pretty close to a perfect day,” Cameron said after the race.  “I’m really proud of the entire group at Acura Team Penske and HPD.  They did a really great job this weekend [with] some electronics improvements for us.  They helped us a ton in the race today.  Hats off to them.  More importantly, we clinched the manufacturers championship for Acura today as well, which is huge for us.  It was pretty close to a perfect day which put us in a fantastic position for Petit Le Mans in a few weeks time.  So it’s really nice feeling to get a big win when it mattered most.”

Ricky Taylor started on pole Sunday and led early on with Montoya close behind.  The two Acuras had near equal pace.  Slower traffic would allow Montoya to get up to Ricky Taylor’s bumper, but once clear of the traffic, Ricky would extend his lead.  Wayne Taylor Racing’s Jordan Taylor was two seconds behind in third, just close enough to stalk the leaders.

The first stop saw Montoya exit the No. 6 in favor of Cameron, while Ricky Taylor was able to hold onto the the lead.  Cameron was able to run down Ricky and snatch the lead on lap 42 of 121.  Despite taking the lead, Cameron was not able to get away before the second round of stops.

Immediately after the stops, Helio Castroneves ran up on the LMP2 car of Performance Tech Motorsports’ Cameron Cassels.  Castroneves attempted to go to the outside of Cassels in turn 4 and went off into the gravel.  The No. 7 Acura was not damaged, but Castroneves’ chances of hanging with Cameron were done.  By the time Castroneves got back up to speed, he was nearly 10 seconds behind.

For the remainder of the race, Cameron was able to maintain an advantage of eight to 18 seconds over Castroneves.  He was never seriously threatened en route to victory.

The final margin of victory was 9.784 seconds over Ricky Taylor and Castroneves.  Action Express Racing’s Pipo Derani and Felipe Nasr were third, courtesy of a pass for position in the final 10 minutes.  Jordan Taylor and Renger van der Zande in their Cadillac were fourth, while Joao Barbosa and Filipe Albuquerque in the second Action Express Cadillac were fifth.

In LMP2, PR1 Mathiasen Motorsports’ Dalton Kellett and Matt McMurry led nearly flag-to-flag to take the class victory.  The margin of victory was officially one lap over the No. 38 Performance Tech Motorsports ORECA 07-Gibson of Cassels and Kyle Masson.  The result clinches the 2019 LMP2 championship for McMurry.

GT Le Mans saw BMW Team RLL’s Jesse Krohn start from the pole in his BMW M8 GTE.  Unlike the other class leaders, he was not able to get away.  Ford Chip Ganassi Racing IMSA’s Dirk Mueller was able to run down Krohn and take the lead in turn 11 18 minutes into the race.  From there, pit strategy jumbled the order at times, but the No. 66 was able to stay out in front.

Once Joey Hand got in the car, no one could really keep tabs with him.  Hand was able to pull away and claim the No. 66’s first victory of the year.

In GT Daytona, Paul Miller Racing came to play.  Corey Lewis won the class pole right at the end of qualifying on Saturday and wasted no time getting away from the pack.  He had a four-second lead over the rest of the class within 10 minutes of the start.

Meanwhile, points leader Trent Hindman was struggling with an Acura that would not handle.  He more or less held up a good chunk of the class before Scuderia Corsa’s Cooper MacNeil and PFAFF Motorsports’ Zacharie Robichon were able to get past.  Hindman and teammate Mario Farnbacher entered the race with a 37-point lead in the championship, more than enough to clinch the GT Daytona championship.  However, an off-day saw the point leaders finish eighth in class.  That dropped their points lead to 32.  They’ll effectively clinch the championship by starting at Michelin Raceway Road Atlanta.

As the race continued on, Lewis continued to expand his lead over the pack.  By the time the first round of stops came around, Lewis had a 25-second lead on MacNeil.  That said, pit strategy did differ significantly.  MacNeil made his first stop as soon as his minimum drive-time (45 minutes) was met.  At that point, Toni Vilander got in the No. 63 Ferrari.

Lewis held out for another eight laps before pitting for full service, including swapping out of the car in favor of Bryan Sellers.  Driving an extra eight laps on worn tires and a slower stop resulted in the lead dropping down to nine seconds.  Despite that, Sellers was easily able to run away from the pack once he was back up to speed.

The rest of the race saw Sellers continue to run away from the rest of the class en route to his and Lewis’ first win of the season.  The margin of victory was a massive 31.424 seconds over MacNeil and Vilander.  Magnus Racing’s Andy Lally and John Potter finished third in their Lamborghini, courtesy of a strong run late from Lally.  The Magnus Lamborghini was approximately 54 seconds behind Sellers at the finish, but it ended up behind the overall leaders at the finish.  As a result, they are considered to be a lap down at the finish.

PFAFF Motorsports’ Robichon and Scott Hargrove finished fourth for the second race in a row.  That was enough to give Robichon the inaugural WeatherTech Sprint Cup championship.  Riley Motorsports’ Ben Keating and Jeroen Bleekemolen fought back from a drive-through penalty to finish fifth.

There is only one more race remaining on the IMSA WeatherTech SportsCar Championship schedule.  That is the Motul Petit Le Mans at Michelin Raceway Road Atlanta.  The race is scheduled to go green at 11 a.m. ET on Oct. 12 on NBC.  Frontstretch will be on-site to bring you all the action from Georgia.