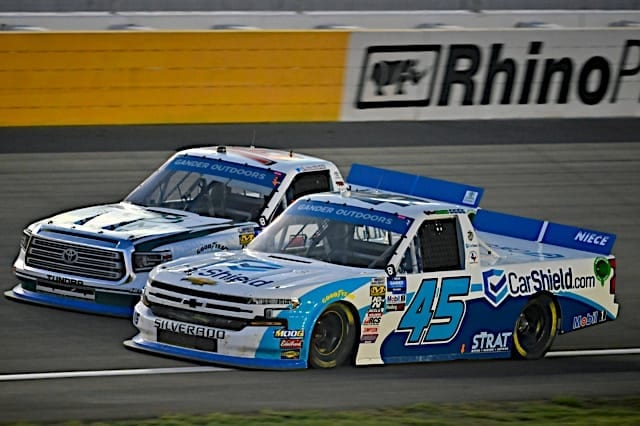 Martin Truex Jr. had been lost in the shuffle of title contenders as NASCAR descended upon the gambling capital of North America. Las Vegas Motor Speedway seemed a better fit instead for Team Penske’s two stars, Brad Keselowski and reigning Cup champion Joey Logano. They were going for their third straight win at LVMS; Truex closed the regular season with three straight finishes outside the top 10.

Qualifying left him even more of an afterthought when Stewart-Haas Racing pulled off a first to fourth sweep with their Fords. Kevin Harvick stayed near the front Sunday (Sept. 15) while Logano appeared the class of the field in the South Point 400. He won the first stage going away while Truex remained mired back in traffic.

But like we’ve seen so often the past three years, Truex and crew chief Cole Pearn just wouldn’t stop digging. Qualifying 24th didn’t stop them; neither did a midrace pit stop in which they dropped another 10 spots. It took less than 160 laps for them to breeze up to the front and past Logano for a stage two victory.

Then, during the final stage, it was Truex building the long-run speed in a race that always had a green-flag look. 72 laps of caution-free action was exactly what the doctor ordered for what became a four-second victory for Truex over Harvick.

That’s the fifth win for Truex this season, a total that leads the Cup Series and sends him right through to the Round of 12. His 17 Cup wins since 2017 are tied with Kyle Busch for the most in the series; a title this November would be his second in three years. And keep in mind Truex is doing it all with the upheaval of his old team, Furniture Row Racing, closing down at the end of 2018. This season is just his first with JGR.

There’s a long way to go and plenty of good competition for this year’s title. But Sunday, Truex reminded the rest of them (including his teammates) he’ll be a tough man to TKO. –Tom Bowles

Over the past two Xfinity Series seasons, Tyler Reddick has proven to be a wheelman. But in two fuel mileage races this year, he’s also proven to be someone that can stretch the fuel mileage, making every last drop count.

With 70 laps to go, crew chief Randall Burnett called Reddick to pit road, where he was hoping to make it to the end of the race on fuel. In order to do so, the No. 2 car would have to save a tremendous amount of gas, which the reigning champion was up for.

Christopher Bell, who dominated the race, pitted under green with less than 30 laps to go. When the No. 20 re-entered the track, he was more than 20 seconds behind Reddick. But over the final 10 laps, with Reddick in severe fuel saving mode, Bell cut the distance from over 10 seconds to seven-tenths of a second, though he came up short of the victory.

The victory is Reddick’s fifth of the season and second on fuel mileage (Michigan in June). Having the speed and perfect strategy could bode well for the No. 2 team starting next weekend at Richmond, where the playoffs begin. – Dustin Albino

Ross Chastain dominated Friday night’s World of Westgate 200, leading 88 of 134 laps but came up short to Austin Hill when the checkered flag flew, thanks in large part to a late decision to take four tires by the No. 16 team.

We came. We dominated. We finished 2nd.

And the sun still came up this morning!

The race also marked the end of the first round of the Truck Series’ playoffs, and the Round of 6 was set. ThorSport Racing went from three drivers racing for a championship to one in a single race when Johnny Sauter and Grant Enfinger, who both suffered engine failures along with teammate Matt Crafton, were eliminated.

Brett Moffitt leads Hill by 17 points while Chastain sits third, a single marker back from Hill. Stewart Friesen currently holds the fourth spot in what would become the Championship 4. Meanwhile, Crafton and Tyler Ankrum find themselves below the cutoff line, facing a three and nine-point deficit, respectively.

The Truck Series takes a month off before opening the next round of the playoffs at Talladega Superspeedway. In a race that’s arguably more about luck than skill, the championship contenders will need to be on their game throughout to survive the carnage and protect their title hopes. – Beth Lunkenheimer

Earlier in the season when it seemed like Michael Self was on top of the world with a points lead, no one could stay ahead of him in the points standings, if they could even pass him, but once Christian Eckes popped back into the picture, things began to heat up.

Despite mechanical issues earlier this season, Self managed to maintain his lead. At least until Eckes started to build back the points he lost after missing Salem in the spring and crashing at Talladega. Now, those mechanical issues are starting to catch up with him, and on Saturday night, his lead dwindled down to just five points over Eckes, who finished second at Salem. Everything that Self built, went up in smoke and he’s now grasping at a small points lead with just two races remaining in the season.

“We’ve had too many mechanical problems this season,” Self said. “All we want to go is come out here and race for wins. We’re going to put tonight behind us and go to Indy and Kansas to go win some races.”

The ARCA Menards Series heads to Lucas Oil Raceway next for the Herr’s Potato Chips 200 on Oct. 5, 2019. Eckes is the defending race winner of the event and will look to take the points lead from teammate Self. The race will be broadcast live on MavTV starting at 9 p.m. ET. – Christian Koelle

For 2019, IMSA created the WeatherTech Sprint Cup, a championship-within-a-championship in the GT Daytona class.  The idea was to draw more teams to the sprint races and even attract new manufacturers.  It did bring in McLaren via Compass Racing, but only two teams participated that weren’t full-time.

Sunday saw the final WeatherTech Sprint Cup race of the year at WeatherTech Raceway Laguna Seca.  PFAFF Motorsports’ Zacharie Robichon entered the race with a one-point lead over Meyer Shank Racing with Curb-Agajanian’s Trent Hindman and Mario Farnbacher.  Once the green flag fell, it became clear that the No. 86 Acura didn’t have the necessary pace.  Hindman held up the pack before dropping back to an eighth-place finish.

Robichon, along with teammate Scott Hargrove, finished fourth in class.  That was good enough to give Robichon the inaugural WeatherTech Sprint Cup championship.  Due to PFAFF Motorsports’ musical chairs that saw Matt Campbell and Dennis Olsen share the car at Lime Rock and Road America earlier this year, it is a solo championship for Robichon.  In the seven WeatherTech Sprint Cup races, Robichon claimed two victories (Lime Rock and Road America), along with three podium finishes.  The other podium finish came at Belle Isle Park in Park Place Motorsports’ No. 73 Porsche.

The final margin in the WeatherTech Sprint Cup was six points over Farnbacher and Hindman.  AVS Vasser Sullivan’s Jack Hawksworth and Richard Heistand ended up third, 21 points back.  Entering the final race of the season at Michelin Raceway Road Atlanta, Robichon is second in GT Daytona overall points, 32 behind Hindman and Farnbacher. – Phil Allaway