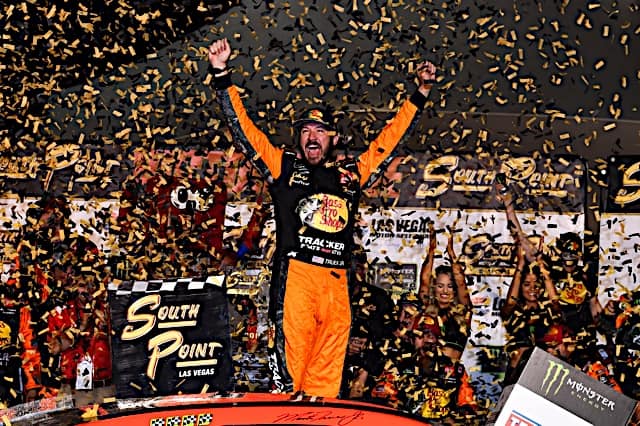 Truex passed Kevin Harvick for the lead with 20 laps remaining and went on to win Sunday’s (Sept. 15) South Point 400. The No. 19 Joe Gibbs Racing Toyota had speed from the start, climbing from 24th to nip Joey Logano for the lead by the end of stage two. Then, during the final stage, he went mano-a-mano with Harvick in a battle that came down to the last green flag pit stop.

“We took a gamble this weekend,” Truex said. “We qualified 24th, and for a while there, it wasn’t looking too smart. But got the right adjustments at the end.

“It’s a hell of a way to make a championship run. Get some good bonus points and move on to the next round. That was a lot of fun.”

Truex fell more than two seconds behind Harvick heading into the last round of green flag stops. But crew chief Cole Pearn knew exactly what was needed to get his driver a little extra speed.

“That run before, when the No. 4 was running away from us, we got too loose,” Truex explained. “I just said, ‘you gotta tighten me up so I can hustle,’ and at the end, I was able to hustle all the way to the checkers and get the job done.”

The team also recovered from a poor early pit stop mid-race that had him driving through more traffic. Then, a restart after William Byron’s spin during the final stage led to contact between him and Kurt Busch. The incident could have easily cut Truex’s tire; instead, it was Busch hitting the wall a few laps later to cause the fourth and final caution of the race.

“Everybody wants to try to get to the middle, that’s where you make up the most spots,” Busch said of a crazy restart. “Truex and I were trying to go for the same piece of real estate.”

As the Busch wreck was happening on lap 189, Logano’s day went south after contact with Daniel Suarez. Damage to the front end of the race car had him scrambling simply to finish ninth, ruining a night that saw him win the first stage by nearly seven seconds.

“The car was really fast in the heat of the day, was a rocket ship during the first run,” Logano, who led a race-high 105 laps, said. “Just got buried a little bit on track position, went back to 15th or so, and then we got fenced. Frustrating, because we had a Ford Mustang capable of winning. I thought we were as good or better than [Truex].”

That left Harvick as the lone challenger for Truex’s Camry. But the No. 4 car couldn’t hang on as the race went green during the final 72 laps.

“Gave ourselves an opportunity,” Harvick said. “I knew the Gibbs cars would be tough. [Truex] was so much better on the second half of a run.”

Harvick held on for second, finishing 4.2 seconds behind Truex. Brad Keselowski ran a surprising third after the team went under the hood at one point, the car was handling so badly; he spent most of the day languishing outside the top 15.

Chase Elliott was fourth followed by Ryan Blaney and Alex Bowman. Byron, despite that late-race spin, was able to hang on for seventh place. Kyle Larson, Logano and Ryan Newman rounded out the top-10 finishers.

It was a nightmare of an afternoon for regular season champion Kyle Busch. Early contact with the outside wall led to an unscheduled green flag stop that put him off the lead lap most of the day. Busch nursed the damaged car home to 19th before spouting off some choice words about lapped cars he felt caused some of the problems.

“Killed our day,” Kyle Busch said. “We’re in the top echelon of motorsports and we’ve got guys who have not won late model races running around the track. They don’t know where to go.”

Luckily for him, Busch’s 45 playoff bonus cushion keeps him a comfortable 36 points above 13th with two races left until the cutoff.

“It’s pathetic to have to lean on insurance,” he said. “My premiums are going to go up.”

Fucking Suarez. Loser. Nobody came close to being in the same league as Logano today with the race high. Marty was not even close. Shame..but as they say..it is what it is. Suarez’s mistake and somebody else pays for it. A gift to Marty. Was the attention seeking roommate in VLANE. Could not watch…ugh. Is she going to have some sort of health issue to make her and her man the center of attention this year in the playoffs? Just askin’!