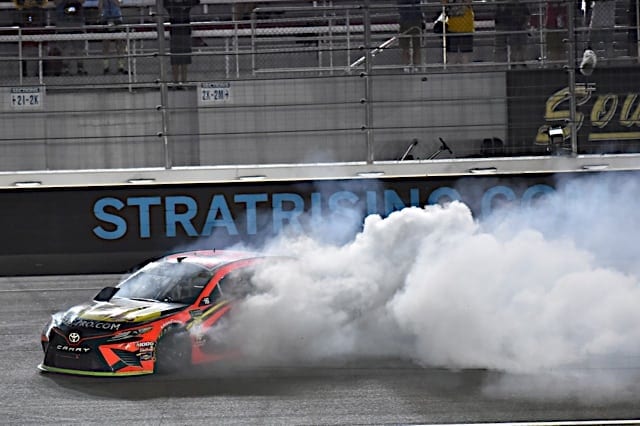 Martin Truex Jr. played his cards right in Las Vegas during the South Point 400. He had a solid car by the middle portion of the race, running down a strong Joey Logano for the stage two victory, but fell back amid some late-race drama. He worked his way back, though, and was in the right place at the right time when Kevin Harvick was slowed by lapped cars to take advantage. He closed up and eventually passed the No. 4 for the lead and went on to win the race.

Truex is locked into the Round of 12 and doesn’t have to worry about points over the next two races, a good thing considering the playoff chaos at the Charlotte ROVAL last year. He had a solid run and nearly won the race, but a collision with Jimmie Johnson on the frontstretch allowed Ryan Blaney to sneak past. Truex’s momentum is massive here; he came from 19th to win stage two with a late pass on Logano and won the race with a pass on Harvick with 19 to go.

Ryan Newman had a solid run that will no doubt be vital to his chances of making the second round. He gambled on a caution in the middle of the final stage, taking two tires and restarting in the top 4. A quick caution made that gamble pay off, and he ran well the rest of the night and finished 10th.

Newman’s been consistent all year, and, even though he’s below the cutline, it’s only by six points. A slip-up by Aric Almirola or Alex Bowman could switch them with Newman in a heartbeat.

Anything can happen. We saw flat tires, mechanical issues, contact and more issues plague playoff drivers. Granted, some bounced back (Logano from damage, William Byron from a flat tire) but others, like Jones, are now on the outside looking in.

Additionally, points are crucial. Logano and Truex both won stages (and Truex the race), gaining valuable stage points that will come in handy over the next two races. Kyle Busch‘s cushion kept him from falling too far in points from his various issues, but Erik Jones, Clint Bowyer and Kurt Busch are all below the cutline.

Kurt Busch’s crew told him to stay out, reversing their decision after contact with Truex, but the No. 1 went into the wall anyway on the same lap. His violent impact ended the Chip Ganassi Racing driver’s day and relegated him to last place, putting him 14 points outside the playoff bubble – Busch finished 11th at Richmond in the spring, so that should give him some confidence going into next weekend. Bowyer and Newman both had top-ten runs at the Virginia oval in the spring, so they’re more than likely looking forward to solid runs there.

Polesitter Bowyer had various issues throughout the day, the prime example coming when he and Paul Menard doored each other on a restart and Bowyer was forced to come down pit road with damage. He wound up 25th when everything was said and done.

Defending race winner Brad Keselowski struggled for much of the day, even having the hood up on the No. 2 Ford Mustang on pit road at one point, but rebounded late to finish third. Meanwhile, teammate and spring race winner Logano had the dominant car of the evening. Logano led 105 laps and won the first stage, but late-race contact with Daniel Suarez was a major setback for the No. 22 car. He finished ninth.

All-time active track winner Jimmie Johnson had a quietly solid 11th-place effort after last week’s disappointment when he missed the playoffs for the first time.

Hometown heroes Kurt and Kyle Busch both had their issues. Kyle brushed the wall early, went several laps down but made them back up over the course of the race. However, once the sun had set and the race was winding down, Busch got loose in the turn and hit the back of Garrett Smithley‘s No. 52. Busch managed his car until the end, but finished 19th. Older brother Kurt’s day ended much sooner and much harder, smacking the wall after a late-race restart.

Two huge moments of truth came during the final stage. A lap 186 restart sent Harvick to the lead and featured the four drivers that took two tires on that gamble running near the front, but misfortune also befell other playoff drivers.

The restart saw both Bowyer’s contact with Menard and Kurt Busch’s contact with Truex – Busch’s would send him into the wall and Bowyer’s sent him down pit road. At the same time, Logano and Suarez got together off of turn two, damaging Logano’s car and ruining his chances at a victory.

The other moment was with 23 laps to go, as leader Harvick ran into two lapped cars and had to split them. As he ran the middle lane, it allowed the already-closing Truex to close up even more, giving him the run and momentum he needed to pass the No. 4 for the lead and win.

Multiple playoff drivers were plagued by issues at Las Vegas, and many are on the outside looking in or not where we thought they’d be going into Richmond. On that note, Richmond Raceway is the last “normal” track in this first round of playoff action. The next week’s event will be at the chaotic Charlotte ROVAL, where crashes galore affected a number of contenders last year, even being the death knell for several of those drivers.

How… much should we take the Las Vegas results into consideration?

Looking at the big picture is even easier in a sport like racing. As mentioned, anything can happen, but drivers like Jones and Kurt Busch had solid runs going until their various misfortunes. Kyle Busch, even with his point cushion, shouldn’t be labeled by that 19th-place effort at Las Vegas, either. He had issues on lap 3 and fell multiple laps down, but he fought back and got up nearly to the top five before running into Smithley.

In other words, not taking the first race – or any one race, for that matter – is important. Either Busch brother or even Jones could go out and win Richmond and lock themselves in ahead of the Charlotte ROVAL.

Would depend on who the leader was, if it was MTJ then yes, if it was Joey Logano then no lol.

Not sure if you meant for this but….
“Looking at the big picture is even easier in a sport like racing. As mentioned, anything can happen, but drivers like Jones and Kurt Busch had solid runs going until their various misfortunes. Kyle Busch, even with his point cushion, shouldn’t be labeled by that 19th-place effort at Las Vegas, either. He had issues on lap 3 and fell multiple laps down, but he fought back and got up nearly to the top five before running into Smithley.

In other words, not taking the first race – or any one race, for that matter – is important.”

But that above is exactly how we label a champion? Is it not? What a joke.
-I do agree with your statement tho, just wish NASCAR did as well.

I totally forgot about the race & opted instead for Barnwood Builders. How full were the stands?