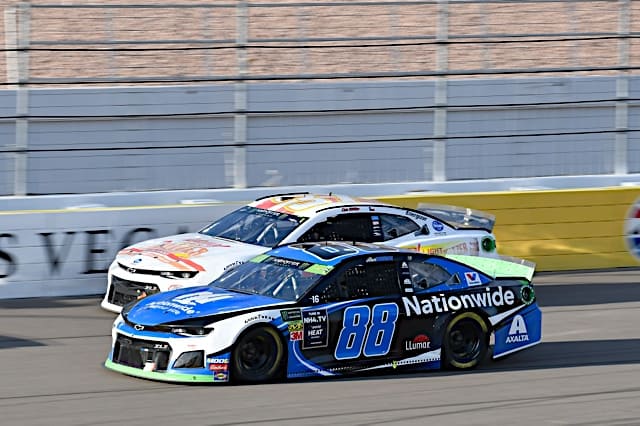 Like the format or not — and I realize plenty who will read this column absolutely and definitively do not — one thing is for sure: the tension ratchets up incrementally as soon the playoffs get underway. Each minor on-track mistake, each pit-road miscue, each missed shift or poorly executed strategy is magnified in the white-hot glow of the postseason.

Take Sunday for example where a mechanical for Erik Jones — the car’s throttle was stuck in second gear — saw him go multiple laps down as his crew rallied to fix the issue. Jones finished a lowly 36th, good for a solitary point. The knock-on impact was a negative 30-point swing with the Joe Gibbs Racing driver now some 26 points away from safety. Given the vagaries of the next two races, a short track and an essentially new road course, Jones is not out of contention just yet but he’s certainly dug himself a huge hole.

Sure, some of you will scoff that this is all manufactured excitement but look at the difference the week made for Jones. His lap 48 wreck at Indianapolis Motor Speedway the previous Sunday saw him finish 39th. This week’s mechanical issue had far greater ramifications beyond just this season. All of which is to say that Jones needs, at the very least, a really good Saturday night at Richmond Raceway with plenty of stage points to boot. But let’s just say he doesn’t. Perhaps he runs true to his average at the track (16th) and pretty much ensures he has no other option than to win at the ROVAL in the final race of this round. Jones finished 30th there last season, so it’s not like it’s a venue he’s heading to brimming with confidence.

How might Jones gamble if he was in contention for the win at the ROVAL? What risks would he be willing to take? How far would he go? Where would the line get drawn? And he’s just one of 16 drivers in the playoffs with his own set of problems not to mention the other non-playoff drivers who have their own unique circumstances and challenges. Over the years in the playoffs, we’ve seen all manner of brawls and confrontations featuring some of the biggest names in the sport. Chances are we’ll see more of the same this year. Now I’m not suggesting Jones will be the spark that ignites the festivities, I’m just using his very specific postseason example to make the broader point that at some point sooner rather than later the desperation moves are coming. Saturday night, short track racing under the lights? Can’t wait.

Sixth place might not be all that much to write home about when you’re contending for a championship, but for Alex Bowman, it was a reassuringly solid start to a treacherous playoff stage. Coming into the first race of the final 10, Bowman’s form had been patchy, at best, and headed into his second tilt at the playoffs, the Hendrick Motorsports driver needed a positive result to get his postseason started in the right way not least given his struggles at Richmond. Since his win at Chicagoland Speedway on June 30, his first at the top echelon, Bowman had recorded just one top-10 finish in nine attempts – a 10th-place run at Michigan International Speedway.

Speed, it’s fair to say, was not in abundance for the 26-year-old wheelman, so the team turned to the car that had won his inaugural Cup race in the hopes that it would give him the requisite pace to compete. As it turned out, it wasn’t a bad decision at all. Bowman now sits 10 points above the cutoff line, having started the day just four markers to the good. And while qualification for the next stage is a long way from assured, Bowman can be happy that his start to the postseason has given him positive momentum headed to a track (seven races, average finish 26th) where he’s had his troubles.

The NTT IndyCar Series wraps up the 2019 season on Sunday afternoon with the 17th and final race of the year at WeatherTech Raceway Laguna Seca. The 2.238-mile circuit will play host to open-wheel racing for the first time since 2004, and it will also be the venue for the final race for three seasons. For the drivers, and especially those in contention for the title, the race is very much an unknown.

“I’ve been saying for a while this championship very well could be decided in qualifying at Laguna,” Alexander Rossi said. “It’s no secret that we’re expecting it to be a challenging race to pass just because of its history. It’s 100 percent going to be a critical qualifying session that you’re going to have to be inch perfect and nail it through all three rounds.”

With double points available, Team Penske’s Josef Newgarden will absolutely not feel safe with a 41-point lead over Rossi and 42 markers on 2016 champion Simon Pagenaud. But as Rossi suggests, the real battle might just come on Saturday afternoon during the Firestone Fast 6 qualifying.

FOUR: Next Up – Richmond

Next up we go short track racing under the lights at one of NASCAR’s most iconic and beloved venues: Richmond Raceway. This will be Cup race number 127, an incredible streak that runs all the way back to the sixth race of the 1953 season and a race won by none other than Lee Petty.

This marks the second year in a row Richmond has been part of the playoffs, rather than the traditional curtain-raiser, and a year ago in 2018, it was Kyle Busch who led the last 37 laps on the way to victory.

Busch also leads the way with wins (six) and average finish (seventh), while Kevin Harvick, Denny Hamlin and Jimmie Johnson all have three wins apiece. Sunday’s winner at Las Vegas Motor Speedway, Martin Truex Jr., won the spring Richmond race, his first with the colors of his new team Joe Gibbs Racing. It wouldn’t surprise anyone if Truex, buoyed by his fifth win of the season, made it two straight to open the 2019 iteration of the playoffs.

And finally, this week, a quick look back at the winners of the opening race in the playoffs under the new “winner takes all format” to see if we can identify any patterns as to the eventual champion.

The one outlier of our five previous examples is 2017, a race won by Truex, who also went on to win his first championship in the very same year. So, the question becomes: is Sunday’s win an early indicator that a second title is around the corner for the New Jersey native? Of course, it’s way too early to make that kind of a declarative statement but the initial signs are certainly positive for Truex as he looks to make the final race in contention for the title for the third year in a row.

So glad to know that all those years before ‘playoffs’ that drivers weren’t driving with intensity of trying hard to win.

I don’t know why people whine and cry about the playoffs. It’s a done deal and isn’t going to change, if you don’t like it then watch golf or curling or trust fund kids playing tennis or some other really exciting sport (sic).

You’re right, and I do watch golf and NFL or just actually do some choring around the house over watching this circus.. Season ended in Indy as far as I am concerned, but if we just fall in line like little puppets how would change come about? Instead let it be none we dont like it through comments, social media, and most importantly our viewership!

Love the people that make these comments. Totally clueless to the fact that that’s exactly what people are doing and have been for the past 10+ years. By the way, the single biggest thing they did to kill the fan base was to add the stupid playoffs, so don’t assume that its here to stay.

how does a throttle get stuck in second gear?