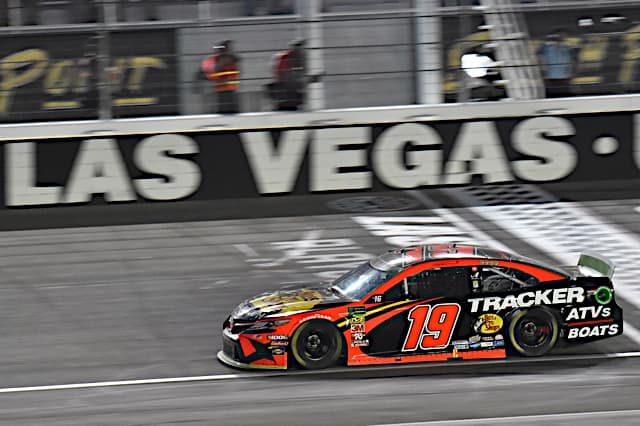 The popularity of roller coasters is often attributed to the thrills, exhilaration, speed, and sharp and often sudden inclines and declines. While theme park enthusiasts love the twists and turns that these towering hunks of steel give them, Martin Truex Jr. wasn’t so keen on those twists and turns at Las Vegas Motor Speedway as he endured an ever-changing race car that hurled him up and down the leaderboard as the day became night. Thankfully, he had the brilliance of Cole Pearn to stay on top of the shifting track conditions. Is Pearn the most adaptable crew chief in the garage?

Kyle Busch sparked quite the stir following the 400-mile event at LVMS regarding an on-track incident that lead Busch to make some aggressive remarks (and do his best imitation of a former Seattle Seahawks player). Is this Kyle Busch being Kyle Busch, or are these distractions that the No. 18 should be wary about?

Joey Logano wished the South Point 400 had been contested solely in the daytime, as the No. 22 Ford was blistering the competition about as bad as what the Death Valley heat does to Santa Claus. But as the old saying goes, “a day without sunshine is like night.” While being no stranger to being in front of the pack, can Logano find a way to dominate an entire race, as he has done before?

Often dubbed as the guy who will “points race you to death,” Ryan Newman collected another solid top 10. However, even with the solid showing at Las Vegas, Newman sits outside the cutoff line for Round 1. Does the guy who landed the final playoff spot have any shot of advancing to Round 2?

Questions are echoing throughout the NASCAR community (including those about late-model experience). Navigating through the tangled web of chaos, bickering and finger-pointing that we saw in Vegas, our Frontstretch experts were put to the excruciating test to determine the current 12 best drivers in NASCAR. So with no further ado, here are Power Rankings: Las Vegas.

Every year since 1992, the International Yo-Yo Federation hosts the World Yo-Yo Contest. Among the entrants for next year’s contest are 2019 World Champion Gentry Stein, 2018 Champ Evan Nagao and Truex, who exemplified a spectacular yo-yo performance as he fell through the field and was reeled in back to the lead. We will see how Truex will do in the 2020 World Yo-Yo Contest, but he is one step further toward another championship: the 2019 Monster Energy Cup Series title.

RETWEET TO CONGRATULATE MARTIN TRUEX JR. ON HIS WIN AT LAS VEGAS. pic.twitter.com/MNqwhagJXz

Harvick could not quite figure out how to catch Truex in the dwindling laps last Sunday night. However, the 43-year-old Harvick is figuring out how to be a millennial and is making impressive progress, for that matter, in this new endeavor. This is dope.

All it took was one millennial paint scheme with the words "YEET" and "BAE" on it.@KevinHarvick, now spotted making kissy faces into a camera phone. ? pic.twitter.com/nQ4PZgFJvA

Unfortunately for Kyle Busch, this is not a power rankings column for late model racing. Thus, for the second week in a row, the No. 18 has fallen another position on our list. This time, Busch sits in third. Also, if you haven’t figured out by now, the only reasons Busch speaks to the Las Vegas media is so he doesn’t get fined.

When you're walking into a building and the automatic sliding door doesn't open as fast as you think it was going to. #NASCAR pic.twitter.com/vOtD8XqHAt

Like vampires in the daytime, Logano had major difficulties in the night time. We do not believe Logano is scared of the dark,  but his No. 22 Ford certainly seemed that way. Despite the evil handling of his car in the second half of the race, Logano crept back into the top 10 and finished ninth.

NEW LEADER: And just like that, @joeylogano completes his march to the front!

The defending champ is leading the #SouthPoint400. pic.twitter.com/lSXyLob43F

Despite most running down in the 20s most of the race, Keselowski rallied to claim the third position at Las Vegas. But as the series treks to Richmond, Keselowski looks to find his way into the next round by winning at the Virginia short track, a circuit that is one of his most average statistically. Despite being his mean of track on the stats board, Keselowski has a sizable cushion over the elimination cut line.

Like everybody (except for Harvick), all playoff competitors celebrated their postseason appearance by burning the rubber off of their Goodyears on the Las Vegas strip. Unlike last year, Hamlin managed to keep all of his quarter panels intact, but unfortunately closed his celebration with whatever this is:

Despite HMS’s regression the last several seasons, fans were greeted to a little throwback, as the Hendrick cars, led by Elliott, wheeled and raced their Chevrolets inside the top 10 almost all night. With three out of the four capturing spots inside the top 10, can this snowball continue to roll?

I confess to secretly wanting @chaseelliott to win because I envisioned everyone in Dawsonville sound asleep because they have to work tomorrow and the siren sounding off at 10:30 p.m. and people running outside in their boxers wondering what the hell is going on. #NASCAR

Decent stage points and a top 10 finish. Onto Richmond next. Hopefully have a good run there.

Somehow, Blaney made it to and from Vegas despite encountering “gangs of screaming girls” and Simon Pagenaud. Blaney also survived a run-in with a big burly intimidating driver by the name of William Byron. With this survival rate, Mr. Blaney does not look to be voted off the island anytime soon.

Since we were in Vegas, the lucky number seven position went to Byron, who captured his 10th top 10 this season. Byron currently sits in ninth on the playoff leaderboard as the series heads to Richmond, which ironically enough is a circuit that the 21-year-old has never scored a top 10 at.

Bowman was certainly feeling the Las Vegas theme. With initial optimistic odds, Bowman cashed in on his initial bet and landed in box number six, completing the three of a kind for Hendrick Motorsports.

This guy will points race you to death. Bring it on.

As always, hard to beat an ice cold @CocaCola after a hot day in the desert @RyanJNewman.@CocaColaRacing // #CokePartner pic.twitter.com/J4aUEv3Acw