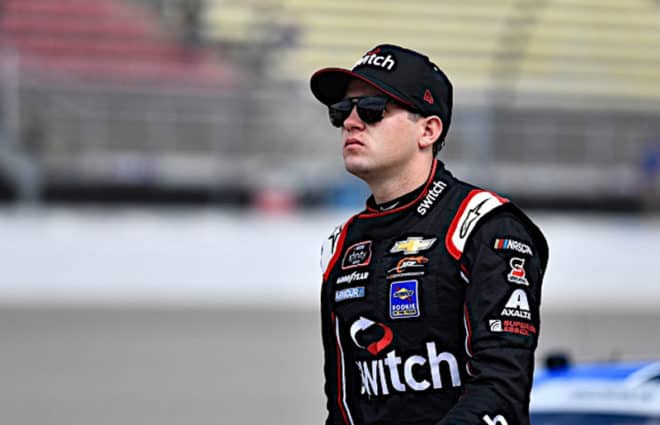 Eyes were on Noah Gragson entering the 2019 NASCAR season, moving up to the Xfinity Series from running two full seasons in the Gander Outdoors Truck Series. Throughout the season, his consistency has improved.

Gragson, 21, hit the ground running with JR Motorsports this season, posting seven consecutive top-15 finishes to start off the season. However, just one of those was a top five (third at Las Vegas Motor Speedway). Through the entire regular season, the No. 9 team’s worst finish is a 22nd, coming at Richmond Raceway, where the Xfinity Series playoffs get underway on Friday (Sept. 20).

During the summer months, Gragson was at his peak, going on a five-race stretch (Charlotte Motor Speedway to Chicagoland Speedway) of consecutive top-six results. Since then, competing on three road courses and all, it’s been a bag of mixed results, though almost always ending up in the top 10 (he enters Richmond with nine finishes inside the top 10 since Chicago).

Gragson said he believes the consistency will continue throughout the postseason.

“To stay consistent is the most important thing for our race team right now, and to continue building,” Gragson said on Thursday (Sept. 19) at Xfinity Series Playoff Media Day. “I know we’ve had all year but you can never stop improving.

“Obviously you want to win, but I think consistency is the most important thing in the playoffs, especially in the first and second round. If you can collect a lot of points on those guys you’ll be sitting pretty good.”

The No. 9 team enters the playoffs as the eight seed, sitting on the cutline. Essentially, Gragson is right in the middle of a hornet’s nest, as fourth seed Austin Cindric is just 17 points above 12th seed John Hunter Nemechek.

That’s expected at the start of the playoffs, but Gragson said he believes that in order to keep on advancing in the playoffs, the No. 9 team will need to be even more consistent than it has been during the regular season, noting he’s seen an uptick in performance at JRM recently.

“The consistency definitely has improved for our team,” Gragson added. “I think a big part of that is I’ve learned a lot from the beginning of the year to now. I’ve grown a lot as a driver, and we’re also bringing really good cars to the racetrack now. There’s been a lot of hard work being put in over the last two to three months, that it’s really starting to show now.”

The aforementioned hard work has trickled through the JRM doors, as Gragson’s teammate Justin Allgaier has nearly won a couple of races in the past month. Michael Annett is also having a rejuvenated year after missing the playoffs in 2018.

But it hasn’t been all rainbows and sunshine for Gragson this season, as he’s publicly stated he feels JRM needed to do a lot of work in order to make a run at the title.

He said he believes the battle has tested him, bettering him as a driver and as an individual.

“When everything is going good, it’s really easy to be happy,” Gragson said. “When things aren’t going the best on the racetrack or speed-wise or whatnot, you can really show your true character. I’ve had to work really hard at trying to be a leader for the team and trying to improve my communication into, I wouldn’t say get us out of a hole when we unload, but maybe we’re not to the feel that I’m looking for as a driver.

“For me, it’s been getting better with my communication with the crew chief, how I can help him do his job better and just try to be positive and have a good attitude every single time we get on the racetrack. When things aren’t going good, it’s easy to blow up. You can take yourself out of contention, so just trying to stay in the fight.”

Entering the playoffs, Gragson has crew chief David Elenz, who’s looking for his third consecutive championship as a crew chief (he won in 2017 with William Byron, last season with Tyler Reddick).

“He knows how to build champions,” Gragson said. “I’m very fortunate that he believes in myself and I fully believe in him. He’s really invested with his time and myself, and vice versa. It means a lot and I’ve got a great team behind me. I’ve got a lot of great guys behind me on our race team, we’re all on the same page, but right now it’s time to do the work.”

Ultimately, Gragson is looking to repeat last year’s performance from the Truck playoffs, though ending the night one spot better on Nov. 16, which would mean he’d be crowned champion.

Dustin joined the Frontstretch team at the beginning of the 2016 season. 2020 marks his sixth full-time season covering the sport that he grew up loving. His dream was to one day be a NASCAR journalist, thus why he attended Ithaca College (Class of 2018) to earn a journalism degree. Since the ripe age of four, he knew he wanted to be a storyteller.
@@DustinAlbino
Previous Ryan Sieg Hoping to Continue ‘Career Year’ in Xfinity Playoffs
Next We Want Passion — Not Just Experience — in Our Drivers