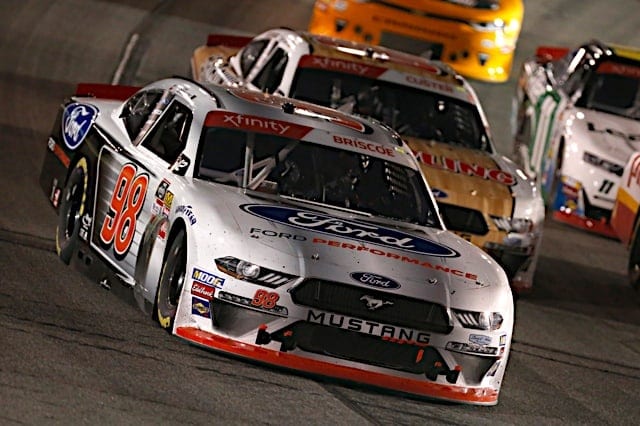 Briscoe finished eighth in the spring race and followed it up in the fall by running inside the top 10 for most of the race, finishing ninth and seventh in the first two stages. He worked his way up near the front over the remainder of the race, sporting a sizable donut on the right side of his car from early contact.

“I feel like this place is probably my worst racetrack,” Briscoe said, “So to come out here with a fifth is always nice.”

Briscoe sits seventh in points after Friday’s race, 65 points back. He heads into the Charlotte ROVAL with a 17-point cushion over the cutoff.

“I think [in] this first round, it’s a lot easier to race your way out of the next round instead of race your way into the next round,” he said. “I feel confident if we had the same results as we had tonight, these next two races we should be alright, but there’s just so many variables that go into the ROVAL — there’s a lot of opportunities to get caught up in other people’s messes.”

The Biagi-Denbeste Racing driver said he felt like the team gave up a lot in the stages.

“I felt like we weren’t a very good race car … tonight,” Briscoe said. “To finish fifth is a good thing, but we just gave up a bit too much on stage points and that definitely will cost us playoff-wise.”

Briscoe was running near the top five in the first stage, but a late caution dropped him to 9th.

The driver of the No. 98 Ford Mustang won at the Roval last year in the same car, winning by 1.5 seconds over Justin Marks.

“[The win last year] definitely gives [me] confidence,” Briscoe said. “There’s so many good road racers right now in the series, so it’s gonna be tough, and with that backstretch chicane it’s gonna be almost a new racetrack.