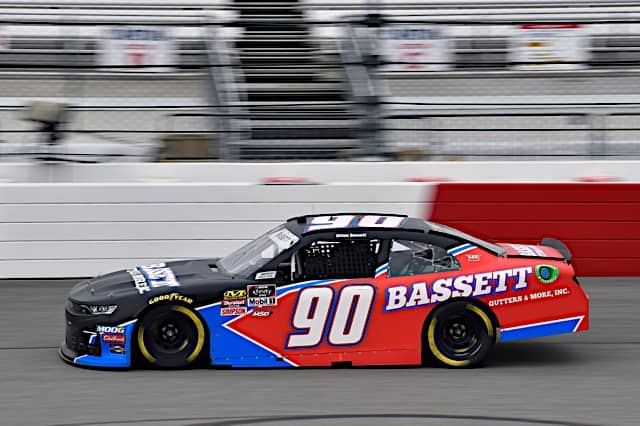 Finishing 13th isn’t sexy for most race teams, but for DGM Racing it’s like a win.

Dillon Bassett, making his fourth career Xfinity Series start, went for a ride in qualifying on Friday (Sept. 20) at Richmond Raceway, spinning out on the get-up-to-speed lap. But when the No. 90 Chevrolet ended his run, he was third of 11 drivers, though having flat spotted his tires.

Because the team needed to change tires, Bassett was required to start in the rear for the green flag, along with playoff drivers Justin Allgaier and John Hunter Nemechek. And though those teams rocketed to the top 10, the No. 90 car methodically made its way into the top 20, then top 15, running with the big boys.

By the end of the opening stage, Bassett was in 15th. At the end of the second stage, the No. 90 was in 14th, ahead of playoff driver Brandon Jones and one position behind regular series champion Tyler Reddick.

Over the final 100 circuits, Bassett was able to maintain track position, taking the checkered flag in 13th, his best career finish in four Xfinity starts.

“Just had to fight all night,” Bassett said after the race. “We kind of put ourselves in a box early, just because we had to start in the rear. Nathan [Kennedy, crew chief], Ronnie [Bassett Jr., brother] and everyone at Bassett Racing and DGM, did an awesome job. We turned this car around from Indy two weeks ago, so to bring it home in 13th, that’s not bad.”

In the spring race at Richmond, Bassett made his series debut in the No. 90 car, placing 15th. At Michigan International Speedway in June, Bassett wrecked out early, finishing last. In his most recent outing at Iowa Speedway, he was having a good day before going viral for hitting the sweeper truck and finishing 26th.

But a strong run at Richmond gives the North Carolina native a ton of momentum going forward.

“Myself and Ronnie have both been fast every time we’ve been in the seat. It’s a lot of momentum heading forward and we’re just going to try to top that next time.”

Mixing it up with some of the playoff drivers was surreal for Bassett, especially because the budget those teams are spending is insurmountable compared to DGM Racing.

“That’s huge, especially for a small team,” Bassett stated. “It’s hard to do, to come out here and compete with these teams that are spending millions of dollars where we’re spending not even a quarter of what we’re spending. It’s a huge accomplishment for not only myself, but this team.”

Not only was the finish Bassett’s career best, but it was the third-best finish for DGM Racing as a company on a non-superspeedway or road course track.