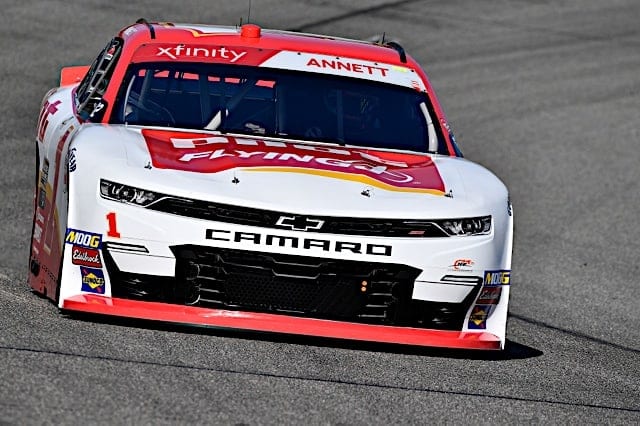 Michael Annett entered the 2019 Xfinity Series playoffs with one mission: points racing. That’s exactly what the No. 1 team did on Friday night (Sept. 20) at Richmond Raceway in the playoff opener.

The No. 1 car qualified 10th, the worst of the three JR Motorsports teams that made the playoffs. During the majority of the opening stage, Annett hovered around 10th position, until his crew chief, Travis Mack, called him to pit road on lap 63 following a caution for Tyler Matthews.

Restarting outside the top 15, Annett was able to race the No. 1 Chevrolet up to fourth position over the final 10 laps of the stage, picking up seven valuable stage points, taking the green and white checkered flag in a three-wide battle with Austin Cindric and Noah Gragson.

Overall, recording seven stage points was mission accomplished for Annett and Mack in the first stage.

“It’s all about acquiring those segment points,” Annett said after the race. “I didn’t believe Travis Mack and I was pretty upset when he called me down. I didn’t think it was going to work, and missed my pit stall because I was so flustered.

“It ended up working out perfect and got up to fourth in that segment, put our stickers on and had a really good race car. Great call. I didn’t believe him, but he believed in me to get back up there with only about eight laps left in that stage.

“I didn’t think there was enough laps and thought we were going to finish outside the top 10, get no points and have used tires for the restarts. It worked out perfect and I’ve got to believe in him all the way through these playoffs like he’s believed in me, and we’re going to keep moving forward.”

However, Mack stuck to his guns, knowing that the tire falloff is drastic at Richmond. Just like his driver, the crew chief knows the playoffs are going to be about picking up as many points as possible.

“Stage points are very important for us in these playoffs,” Mack added. “Every stage point adds up in the end. We didn’t have the best finish we wanted, but stage points added up to where we had a really good points day.”

Mack notes that in order to make the Round of 8, the No. 1 team is points racing at the next two races; the ROVAL (Charlotte Motor Speedway) and Dover International Speedway.

“In this first round of the playoffs, we’ll do a lot of that stuff,” Mack said. “When we get to that second round we’re going to go for that win.”

Despite the solid stages, Annett took the checkered flag in ninth position, worst of the four JRM drivers with Allgaier finishing fourth, Gragson seventh and Zane Smith eighth. But he believes the strong finish — his 16th top 10 of the season — gives him momentum going into the ROVAL.

“We came home ninth, so 14 stage points and a ninth-place finish is a good way to start these playoffs,” Annett stated. “It’s about stage points. That’s what it’s going to be all about, acquiring as much of those and then just having a solid finish is going to at least get us to the Round of 8.”

With the series heading to the ROVAL next weekend, Annett enters the race with a 20th-place finish to his credit in the lone race at the track. But this season, he has an average finish of 11th at the three road course races.