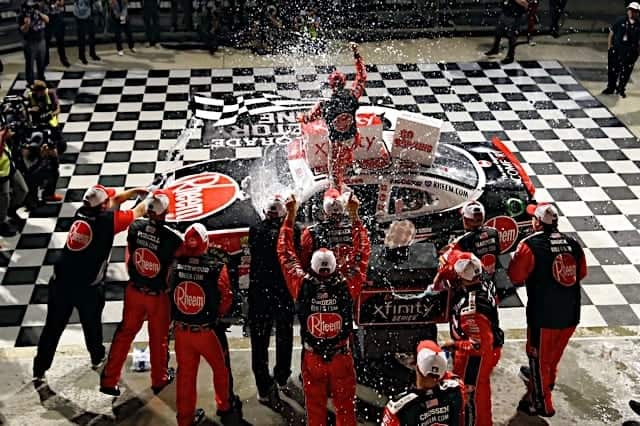 The NASCAR Xfinity Series Go Bowling 250 at Richmond Raceway, like three of the last four NXS races at Richmond, ended up being the Christopher Bell show.

Bell absolutely dominated the night, jumping up from his second-place starting spot on lap 6, winning all three stages by over a second each and leading 238 of 250 laps. With his efforts, Bell walked away with seven playoff points and a lock into the Round of 12.

Pole-sitter Austin Cindric backed up his finish of second in the spring race at Richmond with another second on Friday night. Cole Custer finished a solid third, his fourth top three on the short tracks in the NXS season this year.

Custer closed within half a second of Bell with 66 laps to go, but Bell had been saving his tires/brakes and would build another second and a half lead over the next 16 laps. Cindric would later make big strides in the closing laps, but it was too little, too late as Bell won by 1.7 seconds.

The race was relatively caution free. The only caution following the stage two restart was the stage break on lap 150. There were a few cautions for minor incidents during stage one, however.

Justin Allgaier started in the rear of the field following a pre-race inspection failure, and was able to drive all the way up to fourth at the finish. Chase Briscoe ended up fifth. Harrison Burton parlayed a guest spot in the No. 18 for Joe Gibbs Racing into a sixth-place finish, the best of the non-playoff drivers.

Noah Gragson began the playoffs with a quiet finish of seventh. Michael Annett finished ninth. Tyler Reddick had an awful race, running as low as 17th at times, but was able to rally to 10th by the finish. Brandon Jones finished 11th and Ryan Sieg was right behind in 12th.

John Hunter Nemechek finished 15th, and got into a wreck with Joe Graf Jr. on the cool-down lap. The two had been racing each other hard for position in the top 15 for most of the final stage before Graf did a bump-and-run on Nemechek in the final corner. Justin Haley struggled and was the last of the playoff drivers in 17th.