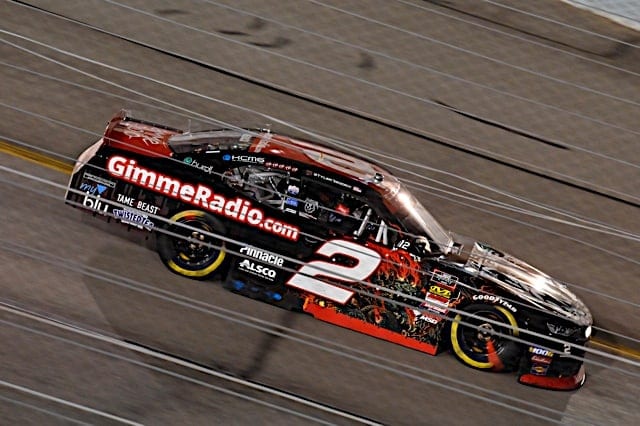 In the playoff opener, Reddick struggled for most of the night before recovering late for a 10th-place finish.

“I’m not necessarily frustrated, just confused more than anything,” Reddick said. “I know our entire [team] is just kind of baffled.”

Reddick started the race from the third position, and the race seemed like it could be the setting for the defending Xfinity champion’s sixth win of the season. But he dropped back almost immediately and ended the first stage in 19th, worst of all the playoff drivers.

“We qualified pretty good, and I don’t think anyone was happy with their balance in qualifying earlier this afternoon,” Reddick said. “But just for some reason, we fired off the race there okay for a little while. And at the end of stage one, I thought we had a flat tire. I don’t know if we actually did or not.”

Reddick did have a leak in his tire and was luckily saved by the caution for the end of the stage, giving him the opportunity to keep fighting.

“But then we had to rebound in stage 2 and we still didn’t have a better car,” Reddick said. “And we were kind of just baffled as to what happened to our car. We didn’t think it was that bad, and it just was in the race. So we just had to fight hard to get every spot we could there, and we were fortunate to at least get 10th.”

Reddick rode outside of the top 10 for majority of the race, but in the closing laps, he clawed his way past a few cars to crack the top 10 and beat out a few playoff contenders. Due to the late rise and his performance in the regular season, Reddick still has a 42-point buffer over the cut line for the Round of 8.

“It wasn’t that bad,” Reddick said. “You’re gonna have bad days. I understand it’s not a lack of effort. We came in here with a lot of good ideas and we really wanted to try and find more speed. It worked for us at Iowa [Speedway], we were really good when we went back there, so we tried to bring some of that same mentality back into this one, and for some reason, it didn’t really work.

“The playoff points I accumulated at the beginning of the year and in the regular season are coming in handy, and that’s the good reason that we got them, in case days like these happen to our team.”

Next for the Xfinity Series in the Round of 12 is the Charlotte Motor Speedway ROVAL and Dover International Speedway. The ROVAL, now in its second year on the schedule, is still one of the biggest mysteries of the playoffs.

“The ROVAL’s a fantastic place of opportunity, but an even more fantastic place to wad your cars up,” Reddick said. “So we’re in a really good spot going into that race. I think if we do just a little bit better job of managing our race than we did today, then we should be able to come out of the ROVAL in a good enough spot to just be smart at Dover and be fine.”

Regardless of the lack of speed of Richmond, Reddick sees the grass on the other side and thinks he has what it take to win back-to-back championships.

“We’re gonna have speed again here soon for sure,” Reddick said. “Obviously in the last few races, we haven’t been exactly where we wanted to be, and we’ve been able to take advantage of the strategy in the past. We’ll find it.”