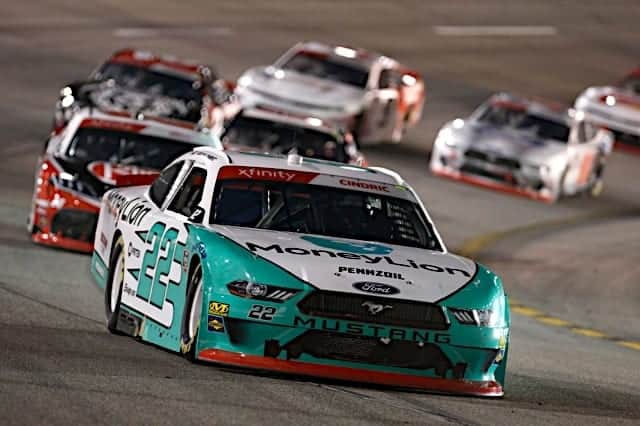 Austin Cindric sat on the pole and raced his way to a second-place finish in the Go Bowling 250 at Richmond Raceway.

The driver of the No. 22 Team Penske Ford Mustang finished in the top five in both stages, recording second- and fifth-place finishes and totaling 50 points by the end of the race.

Cindric sits fourth in the standings, 17 points above the cutoff.

“It’s the only double-digit buffer I think I’ve ever had in anything with NASCAR, so I’ll take it,” he said. “Two runner-up finishes here at Richmond is good, but you want to win races so you got to keep working, got to keep figuring out how to catch that guy in the 20, but overall a great day.”

Cindric won at Watkins Glen and Mid-Ohio in August, and finished 12th at Las Vegas before the playoffs.

‘We’re peaking at the right time, that’s for sure,” Cindric said. “I’m really proud of the progress we’ve made, the progress I’ve made. Richmond’s definitely a fun place because you can use both pedals and both hands to make something happen.”

Cindric was the pole-sitter for last year’s race at the Charlotte ROVAL and finished third, leading 13 of the 55 laps.

“I feel confident we can run top five [at Charlotte],” he said. “We want to win. I think the Gibbs cars have been exceptionally good on road courses this year, so I’d expect [Christopher] Bell to be on it, and he’s probably got a little confidence now that he’s decided he can actually road race, so he’s done a good job and I expect to be racing him for sure.”

Cindric’s point cushion gives him some leeway going into the ROVAL.