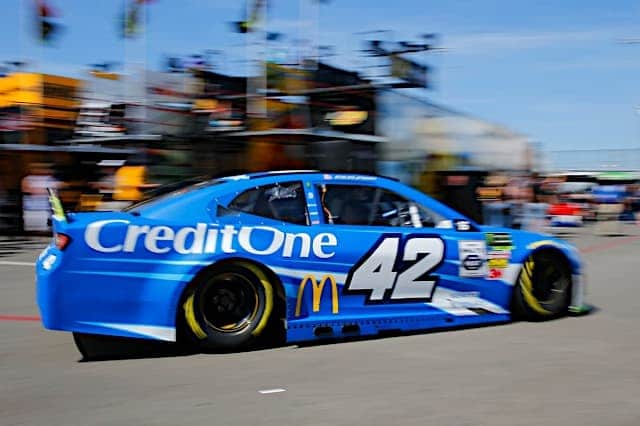 The Monster Energy NASCAR Cup Series heads to its second race in the round of 16 at Richmond Raceway for the Federated Auto Parts 400. The race will kick off shortly after 7:30 p.m. ET Saturday, Sept 21 with television coverage from NBCSN.

The D-shaped Virginian racetrack is just three-quarters of a mile in length. As is the case with all of the short tracks, vehicles will utilize the higher-horsepower package with no aero ducts. Also, tire wear should play an important factor Saturday night under the lights.

On Friday drivers practiced in a pair of separate sessions and made their qualifying runs to set the field for the race. However, inspection is Saturday before the race, and any car that fails a single time will start from the rear. This could be good from a fantasy perspective, as drivers like Kyle Busch or Martin Truex Jr are fast enough to drive to the front. Even though it’s hard to pass at this short track, it’s not impossible for one to finish in the top 10. Be sure to check tomorrow’s inspection results before the race and make any necessary adjustments to your lineup.

Of course, those who start near the front and lead laps can also provide good point-per-dollar value, as long as they finish well. In the Spring event two drivers led over 100 laps (the two mentioned previously). Lastly, several people had at least 10 or more fastest laps at that event, including a couple  of racers in the back. All these bonus points can add to your final DraftKings score and help you win your contests.

First, here are the results of last week’s picks:

As you can see, it was not possible to use all these drivers because the total price went over DraftKings’ salary. Still, Keselowski, Elliott, and Blaney all did very well at Las Vegas Motor Speedway last week.

In order to fit all the plays I wanted I had to resort to a more balanced lineup, but it could still work out. Can you believe it’s been two years since Larson won a Cup race? Fortunately for him, he arrives to that very track and event he last won, Richmond Raceway. In addition to his victory there, he has a runner-up and two seventh-place finishes in 11 races.

He may have crashed out early of the first race at this track this season, but that was part of a rough stretch. The No. 42 Chip Ganassi Racing driver has since found the groove he needed to successfully make it into the playoffs. While he has yet to win, Larson has four top fives and nine top 10s in the past 12 races. At another short track, Bristol Motor Speedway, Larson finished sixth after leading 62 laps. He also was one of very few drivers who scored over 80 DraftKings points. This week he’s slated to start 13th, but since he had the second-fastest 10-lap average in opening practice, he should hustle his way to the front.

The No. 9 Hendrick Motorsports racer qualified third, which is one of his highest starts at Richmond. So far Elliott only has two events where he finished below his starting point, and one of those was only by one and within the top 10. In the Spring 2018 race he started and finished second, and even though he’s only led 34 laps, his history indicates he should stay out of trouble.

Additionally, he’s performed fairly well at short tracks this season. At Martinsville Speedway he led 49 laps but ended the race in second place. While his summer was less than ideal, he did win at Watkins Glen and finished fifth at the second Bristol event. Since Elliott is starting third, he has a good chance to lead some laps and contend for the win. If he does, your DraftKings score would be high (if the other drivers do well also).

Ok, this fellow hasn’t had the best time at this track, and he only has eight top fives this season. So why did I pick Blaney? Well, he does have two straight top-10 finishes at Indianapolis Motor Speedway and Las Vegas. Also, he was fourth at the Spring Martinsville and Bristol events. In fact, at that latter race the Team Penske driver led a whopping 158 laps. Finally, he had the second-quickest 10, 15, and 20-lap average in final practice. Barring any inspection changes, he’ll begin the race 15th and should display the long-run speed needed to get to the front.

The No. 6 Roush Fenway Racing wheelman has certainly performed well this season thus far. Unlike some drivers, his summer was actually pretty hot with five top 10s between June’s Michigan International Speedway race and the event at New Hampshire Motor Speedway. Newman now is on a two-race top-10 streak, and has a good chance to carry that momentum into Saturday night.

Newman is set to start 19th, but can you guess who was behind Blaney in the 10- and 15-lap averages? That’s right, this guy. The team certainly found the speed he needs to finish well and continue on to the next round of the playoffs. Since he isn’t starting very high, he would gain you some much-needed bonus points should he get a good finish.

Suarez is my honorable mention for a few reasons. First, he has a couple of top 10s at Richmond, both of which were several spots higher than where he began. Second, he finished in the top 10 at both Bristol events this year (which again were ahead of his starting position). Finally, he’s slightly cheaper than Matt DiBenedetto, and for a guy who is also hungry for his first win, that’s a pretty good value. However, he could end up being too aggressive and make mistakes. His final practice speed was also good, as he had top-10 five, 10, 15, and 20-lap averages.

I call this driver Mr. Consistency, because he hasn’t finished outside the top 20 since at Kansas Speedway. That’s an incredible 16 top-20 streak! Buescher also has four top 10s to boot. The best part about this is he generally doesn’t qualify very well, which is the case this week. The JTG-Daugherty Racing driver will begin 23rd and could earn bonus DraftKings points for positive place-differential. If he can get you 30-40 fantasy points, he would definitely hit his value.