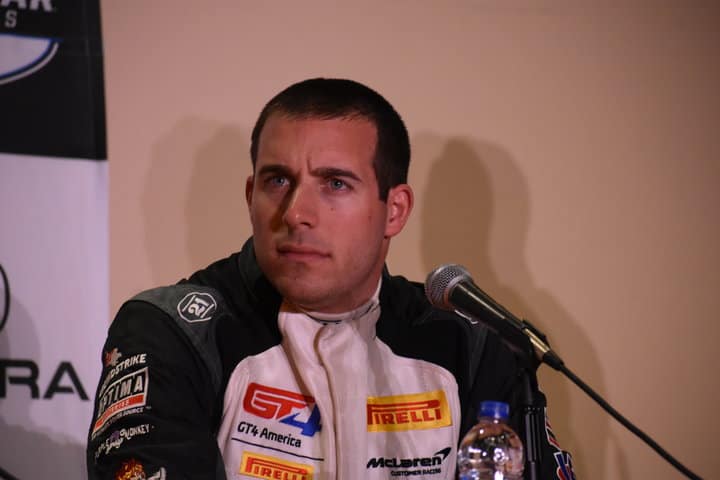 Blackdog Speed Shop’s Michael Cooper qualified third for the first Pirelli GT4 America Sprint race of the weekend Saturday (Sept. 21) at Road America. By the end of the first lap, he was in the lead. Once there, no one could touch him as Cooper pulled away to take his third win of 2019.

Robinson Racing’s Shane Lewis put his Chevrolet Camaro GT4.R on pole with a swell lap. On the start, Cooper was able to make quick work of Team Panoz Racing’s Ian James. James ended up running off the pace for much of the race, eventually finishing 10th.

Cooper got an excellent start and ran down Lewis on the run to turn 5. Cooper ended up getting a good run off turn 5 and was able to make the pass on Lewis under braking for turn 6 underneath the Corvette Bridge.

Once out front, Cooper simply buttoned down and set some good laps in order to open up the gap over the rest of the field. The Racers Group’s Spencer Pumpelly gave chase early, but dropped back off of Cooper.

As the race continued, Pumpelly was able to make some inroads to get back toward Cooper. However, he simply ran out of time. Cooper ultimately ended up winning by 1.748 seconds. Lewis finished third, followed by teammate Gar Robinson.  Andrew Davis, driving an Audi R8 LMS GT4 for Kelly Moss Road & Race, finished fifth.

In Pro-Am, Park Place Motorsports’ Alan Brynjolfsson earned the pole, but got off to a bad start. That allowed Ian Lacy Racing’s Drew Staveley to come past in his Ford Mustang GT4.

Once out front, Staveley had to contend with Cooper’s car owner/teammate Tony Gaples for the lead. Eventually, Staveley was able to tag onto a group of Pro drivers and leave Gaples in his dust. From there, Staveley pulled away to take his fourth Am win in the last five races. The win was also enough for Staveley to clinch the Pirelli GT4 America Sprint Am class championship with three races remaining.

Staveley, who finished seventh overall, finished 13.484 seconds ahead of Gaples. Jeff Courtney finished third in his Maserati, followed by Brynjolfsson. Sean Quinlan was fifth in his BMW for Stephen Cameron Racing.

Pirelli GT4 America Sprint Race No. 2 at Road America is scheduled to go green at 11 a.m. ET. The race will be streamed live at GT4-America.com. By virtue of turning the fastest lap of the race Saturday, Cooper will start Race No. 2 from pole. Pumpelly will start alongside.

Both races are currently scheduled to air in highlighted form on CBS Sports Network on Oct. 6 at 3 p.m. That will be a 60-minute broadcast.