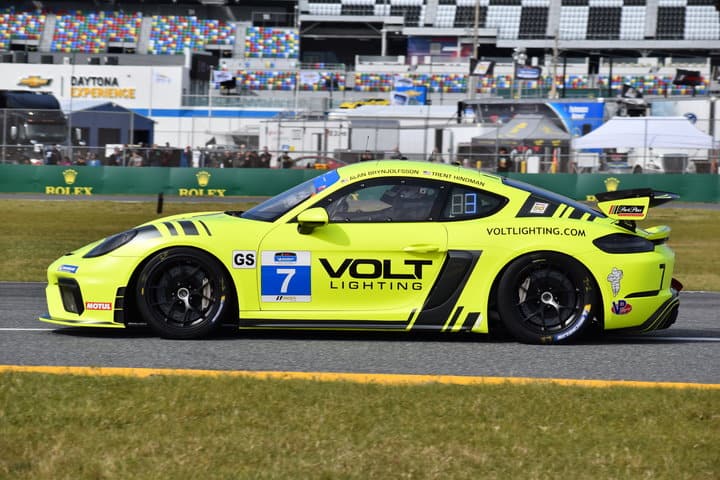 Park Place Motorsports’ Alan Brynjolfsson and Trent Hindman handled treacherous conditions and having to start in the pit lane to win Race No. 2 for Pirelli GT4 America SprintX and GT4 East teams at Road America on Sunday (Sep. 22).  It is the Park Place duo’s second overall victory of the year and fourth GT4 East Pro-Am victory.

In Brynjolfsson’s case, running the rain-shortened Sprint race earlier in the day helped him out significantly.

“It was definitely very helpful to have the experience,” Brynjolfsson said after the race.  “I also had another race, [the Road America 120 for IMSA Michelin Pilot Challenge] at this track that was in the rain.  It was very helpful and came in handy.”

RENNtech Motorsports’ Guy Cosmo dominated the early portions of the race.  He used his pace to run away from the pack.  In six laps, he had already opened up a lead of over 10 seconds.  Meanwhile, there were two drivers that were on the move early on.  One was GMG Racing’s Alec Udell.  Udell started seventh and quickly came forward to second in his Porsche.

The other was Hindman.  On Saturday, Brynjolfsson had crashed his Porsche in an incident with Andretti Autosport’s David Donohue.  Donohue’s McLaren was unable to take the start, while Hindman had to start from the pit lane.  From effectively dead last, Hindman charged all the way to fourth in the first six laps.

The mid-race pit window changed everything.  Cosmo pitted his Mercedes early and exited the car in favor of Patrick Byrne.  Byrne was fast in the dry on Saturday morning, but took his time to get his bearings in the wet.  That cost the RENNtech team.

When Cosmo pitted, Udell took the overall lead and proceeded to stay out as long as he could.  Then came trouble.  First, Jason Bell felt like he needed to leave a little too quickly.  He ended up leaving his pit stall before the driver’s door was properly latched.  Despite that, Bell exited the pits with the overall lead, having jumped Byrne in the sequence.

That lead did not last long as Bell went into turn 6 too quickly on his out lap and went off into the grass.  Brynjolfsson was close behind and took the overall lead when Bell went off.  Later on, Bell was penalized for an unsafe pit release and was forced to serve a drive-through penalty.  He would eventually finish ninth overall, 76 seconds back.

Once in the lead, Brynjolfsson quickly pulled away.  Murillo Racing’s Matthew Fassnacht was able to get past Byrne for second, but could do nothing with Brynjolfsson.  From that point on, Brynjolfsson opened up his lead by a more than a second a lap to take the overall victory.

Brynjolfsson and Hindman’s margin of victory was 22.020 seconds over Fassnacht and Christian Szymczak, who won the GT4 East Am class.  Fassnacht just barely held off Byrne and Cosmo for second.  NOLAsport’s Matt Travis and Jason Hart finished fourth, good enough for the SprintX Pro-am victory.  That came despite Hart having to pull over at the initial green flag to recycle his electronic systems in his Porsche.  The Stephen Cameron Racing BMW for Greg Liefooghe and Sean Quinlan were fifth.  Team Panoz Racing’s Dr. Preston Calvert and Matthew Keegan won the SprintX Am class in 11th.

For GT4 East teams, the season concluded Sunday.  Karl Wittmer, who split the season between Precision Driving Tech and Ian Lacy Racing, will win the Pro-Am title by seven points over Brynjolfsson and Hindman.  Fassnacht and Szymczak unofficially claimed the Am title by 15 points over The Racers Group’s Sean Gibbons.

The Pirelli GT4 America SprintX season will conclude with two races at Las Vegas Motor Speedway in October.  Entering that weekend, Liefooghe and Quinlan will enter with a four-point lead in Pro-Am over Hart and Travis.