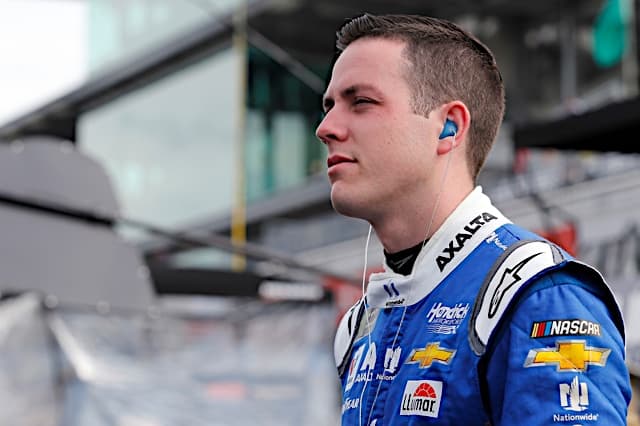 Alex Bowman never quite overcame early contact with Austin Dillon at Richmond Raceway in Saturday night’s (Sept. 21) Federated Auto Parts 400. He nursed his No. 88 to a 23rd-place finish, putting his hopes to advance to the Round of 12 in critical condition.

After a pit stop cycle at the conclusion of stage one, Bowman made contact with Dillon and teammate William Byron in turn 1 on lap 113. The three-wide scuffle damaged both the No. 88 and No. 3, leaving each wounded for the remainder of the night.

Dillon appeared to take issue with the incident, punting Bowman’s Chevrolet shortly after the contact and sending him spinning.

“I’m going to shove that silver spoon he’s been fed off all his life up his ass,” Bowman said over the radio after the incident.

He ran near Dillon the rest of the night, finishing one spot behind him with both cars four laps down.

“He just races dumb,” Bowman said of Dillon afterward. “It’s Richmond, it’s hard to race not-dumb here sometimes, I don’t know – he drove me all the way to the inside wall on the restart and then drove off into three and just cleaned us out. So frustrating, but that’s short track racing and it’ll happen.”

The incident finished off what had been an unimpressive weekend for the No. 88 HMS team. They struggled to find speed during the early stages of the 400-lap event and were one of the worst-performing playoff teams from the start.

“We really did it to ourselves,” Bowman said. “[We were] just really bad since we unloaded, never really got a handle on it, [but] it’s not for lack of effort. All the guys worked really hard and we came here wanting to have a racecar that turned really well all day, and we got that. Just had no drive from the time we unloaded to the checkered flag there.”

Bowman now sits two points below the cutline in 13th.

“It’s really frustrating,” he said. “Just a crappy day, didn’t execute well to top it off, but we’ll go to the Roval and our road course cars are really good. We were good there last year, hopefully we’ll be all right.”

I was there last night. The HMS cars were absolute garbage. JJ ran hard but was, at best, a tenth place car. Chase never got his car better all night. The other two — well they should be embarrassed, all that funding to run like dogs**t, and get abused by Bubba & Matt D all night…

Dillon is always running into someone unnecessarily. I doubt that he’d even have a car if it weren’t for granddaddy.