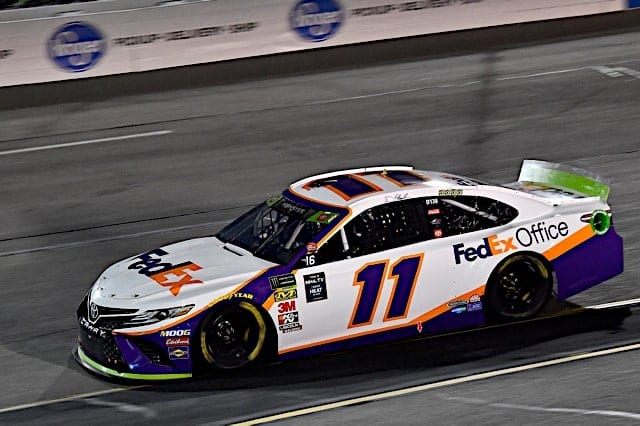 Denny Hamlin was a big part of the Joe Gibbs Racing parade during the Federated Auto Parts 400 at Richmond Raceway He wound up third in the team’s 1-2-3-4 finish — though that was downgraded to only a 1-2-3 after Erik Jones failed post-race inspection.

It would have been JGR’s first sweep of the top spots since expanding to four cars back in 2015. Either way, it still capped off a big weekend for the Gibbs name. Joe Gibbs’ grandson Ty scored a win in the K&N Pro Series at New Hampshire, while JGR driver Christopher Bell won Friday night’s Go Bowling 250 at Richmond.

Hamlin had a rough night at Las Vegas last week with a 15th-place run. But after this Richmond rebound? He still has eight top-six finishes in the past 10 races.

“We had a good day,” Hamlin said. “[We] just were third-best there. Couldn’t get the car to really respond and do the things that it needed to do to run with those other two.”

Hamlin was referring to teammates Martin Truex Jr. and Kyle Busch, who finished one-two for JGR. That left him a step behind his two top rivals for the championship but a clear step ahead of everyone else.

“Overall, a good day,” he said. “Just needed just a hair more. A little bit goes a long way at this racetrack, and we just didn’t quite have enough.”

“It was a great run, obviously, and we knew all of our cars were really good on short tracks,” Hamlin said. “At Bristol, we kind of saw the same thing. But certainly, a great day for the company and we’re just going to keep plugging along to the next round and get a little better.”

Hamlin sits 55 points above the cut line and is in a good position to make the Round of 12.

“We’re just trying to have some fun next week,” he said. “[We’ll] go there, have fun and whatever happens happens. I’m very confident that we can go there [and] be a contender to win just like we have every other race.”