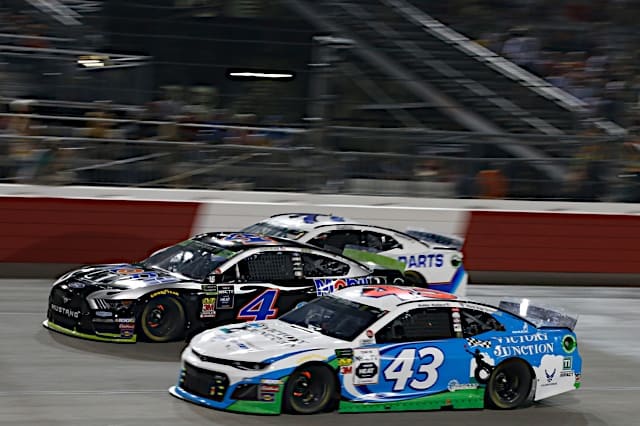 Coming into his sophomore season in the Monster Energy NASCAR Cup Series, Bubba Wallace was paired with a rookie crew chief: Derek Stamets.

The new head wrench was promoted from lead engineer — a post he had served at Richard Petty Motorsports since 2012 — to call the shots from atop the No. 43 pit box. The pairing struggled mightily early in the season, only scoring two top-20 finishes in the opening 17 races of the year.

But then came an increase in sponsorship funds via World Wide Technology founder and chairman David Steward in partnership with Victory Junction. Wallace, Stamets and company have slowly righted the ship ever since, scoring a 14th-place finish at Bristol Motor Speedway and a third at Indianapolis Motor Speedway.

On Saturday night (Sept. 21), the No. 43 team continued their solid streak with a 12th at Richmond Raceway in a night that could have been much worse for the team. Wallace was 27th and 31st in the two practice sessions and qualified 30th before failing NASCAR’s pre-race inspection. That left him forced to start this Cup race at the rear.

The No. 43 started the race slow as well, quickly falling a lap down. But Stamets called his driver to short pit, and the fresh tires gave Wallace the speed to make up that lap lost from pitting. It also gave the team leeway to implore more strategy at the end of stage one.

When the caution came out for stage breaks, Stamets had Wallace stay out and take the wave-around. The caution flew again a few short laps later, securing his driver’s spot on the lead lap. The strategy worked out perfectly, but more importantly, Wallace showed more speed to stay with the faster cars the rest of the race.

“It was a great surprise after struggling in practice, struggling in qualifying and failing tech,” Stamets said. “Bubba figured it out — what problems we had in practice. He worked around them. He got the thing driving really well for us.”

Wallace still did end up getting lapped again in stage two. But this time, he stayed behind the leaders and clawed his way past Joey Logano and Michael McDowell as they were getting lapped to earn the free pass at stage’s end.

“It’s just great. It’s what you always want from your driver,” Stamets said about Wallace’s late stage two performance. “You can’t ask for any more. That’s why we keep racing, when they pull stuff like that off.”

Stamets said he didn’t have to tell Wallace anything to motivate him to pass Logano and McDowell for the free pass.

“I saw how hard he was pushing on his own, and he didn’t need any help from me,” Stamets said.

Wallace completed the race without being lapped again, and even fended off winner Martin Truex Jr. on the last few laps to uphold that. In the process, RPM beat out cars from much bigger teams, such as Hendrick Motorsports, Team Penske and Stewart-Haas Racing.

Stamets humbly gives all the credit to Wallace’s driving ability. But without his strategy and adjustments, the No. 43 team could have found themselves several laps down early — something nearly impossible to overcome at a short track.

“It’s a lot more fun to run top 20 than barely run top 30,” Stamets said. “I’m just hoping we can keep it going. It’s still tough — there’s gonna be ups and downs. But Bubba’s gone on offense right now, and that helps more than anything.”

I was there last night. Bubba ran hard all race. He passed many better funded cars throughout…..