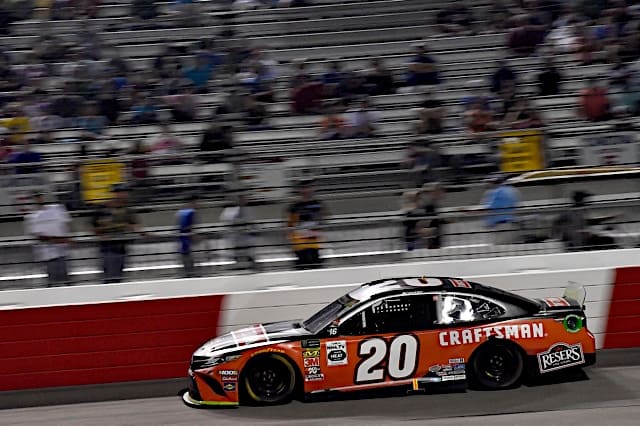 Entering Saturday’s (Sept. 21) Federated Auto Parts 400 at Richmond Raceway, Erik Jones needed everything to go his way. Fast forward nearly three hours later, and the No. 20 team had a decent shot of making the Monster Energy NASCAR Cup Series Round of 12.

A fourth-place finish appeared to be the boost Jones needed to vault himself back into the championship conversation. But late-breaking news his No. 20 Toyota failed tech inspection suddenly puts him back in a difficult position. Nailed as the random car in post-race teardown, the violation strips Jones of all Cup points he earned during the weekend at Richmond. Suddenly, Jones went from just three points out to 45 behind entering the Charlotte Roval; he was credited with a last-place finish.

Details were scarce but NASCAR sources claimed something was off on the rear toe of the car. Managing Director Jay Fabian later clarified the issues in a presser held after midnight ET.

“There’s fairly critical measurements on the rear wheel alignment that have to be followed. There’s any number of the things that team could do, or not do, to make it fail. We give a pretty strong allowance on what they can run pre-race to post-race, and it’s crept out of that range.”

JGR’s Senior Vice President of Racing Operations Jimmy Makar said the team is leaning toward not appealing the decision.

It was a sour end to what had been an encouraging weekend for Jones. On Friday, he slotted the No. 20 car in 16th during qualifying. Needing valuable stage points, he creeped up to ninth by the end of stage one and fourth at the end of stage two. By earning nine extra points, it set him up well heading into the final 200 laps of the race.

Over the course of the final stage, Jones raced anywhere from fourth to seventh, engaged in a hard battle with Ryan Newman throughout. Earning a total of 42 points appeared to be what the No. 20 team needed after placing 36th in the playoff opener at Las Vegas Motor Speedway last weekend.

“It’s almost frustrating in a way,” Jones said of the finish. “We knew we would have ran top five last week, and it’s like we’d be in a pretty good spot points-wise, but you can’t go back and change things, so we just did what we could tonight and got close.

“We’re only a few points out of the cutoff, so at least we gave ourselves a shot for next week. We have to have a good week and finish up front. We’re there and a lot closer and in a better spot than we were last year after this one.”

Following Vegas, Jones was shotgun on the 16-driver playoff field, 26 markers back. By picking up valuable points, and the likes of Alex Bowman, William Byron and Kurt Busch having bad days, Jones initially left Richmond only three points behind the cutline entering the Roval at Charlotte Motor Speedway next week.

Compared to 2018, when Jones also had a miscue in the first race of the playoffs, he felt more confident heading to Charlotte this time around.

“We need to improve from last year,” Jones said. “Last year, I thought we made too many mistakes, obviously went to a backup car and didn’t have the speed we needed either in the race.

“We’ve got some better cars this year and we’re going to do a lot of work this week between the simulator and just studying last year’s race, just trying to get a little bit better on my end. It’s probably one of the toughest tracks we go to all year, just need to have another solid day. Stage points again and finishing up toward the top five.”

Despite the result at Vegas, Jones didn’t believe he had to win in this round in order to advance to the Round of 12.

“Last year, coming into this one, I probably had that mentality and it kind of hurt our race going into it,” he said. “This year, I was just focused on getting a good race and getting good points. I knew we were capable of running up front and getting good stage points and finishing well, we just needed to do it. We needed some bad days, some guys had some bad days and that helped us a lot as well.”

But now, win-or-bust may be a reality for Jones pending on if JGR chooses to appeal the penalty. A 23-point gain on his competitors on the cutline was wiped out by the sudden post-race inspection failure.

The Jones inspection issue also wipes out a Joe Gibbs Racing 1-2-3-4 sweep. It’s the first time one organization had swept the first four positions of a Cup race since Homestead (2005) when Roush Fenway Racing accomplished the same feat.