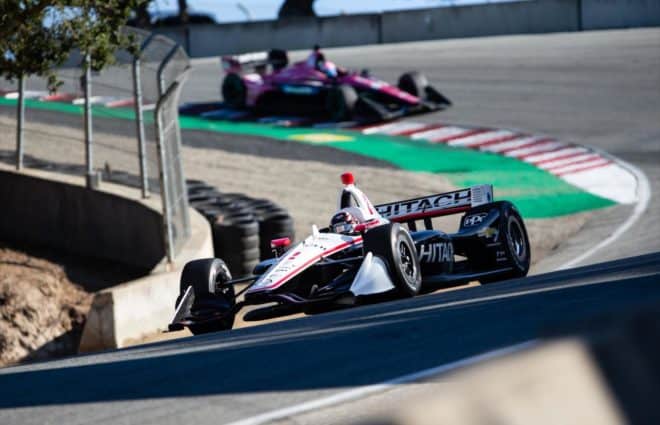 NTT IndyCar Series Title on the Line at Laguna Seca

Four drivers have a shot at winning the 2019 NTT IndyCar Series Championship this weekend at WeatherTech Raceway Laguna Seca. With double points on the line, nearly anything can happen in what’s been a wild season to date.

Josef Newgarden, like he has all year, holds the edge with a 41-point advantage over his closest competitor, Alexander Rossi. Simon Pagenaud, this year’s Indianapolis 500 winner, sits just one point behind Rossi. Defending champion Scott Dixon is the final driver eligible, facing a seemingly insurmountable deficit of 85 points.

Naturally, Newgarden has the easiest path to a title. With his 41-point cushion, a finish of fourth or better locks in his second championship in three years. Any further back and he’ll need a little help. But even with a fifth-place finish, both Rossi and Pagenaud would need to rack up a few bonus points on their way to victory lane to have a chance.

However, anything other than a win doesn’t do either of them any good if Newgarden finishes ninth or better. Further back and the scenarios get messy, with bonus points and tiebreakers coming into play.

Although mathematically still eligible, Dixon would need something catastrophic to happen to all three of his rivals. So unless the trio get wiped out in a first-lap, first-turn wreck, it’s effectively a three-horse race for the title.

What remains to be seen is if anyone actually wants it.

Newgarden has seemingly tried to give the title away with some lackluster performances and late-race spins at Mid-Ohio and Gateway, only to roll into Laguna Seca with considerable breathing room.

Dixon has managed to find victory lane since Newgarden’s commanding win at Iowa, but a 20th and 16th-place finish the last two weeks stunted momentum. Meanwhile, Rossi and Pagenaud have combined for just two podiums since that Iowa event.

They’ll each have to do better than that on Sunday. But if Newgarden can channel some of his early season success, it might not even matter.

Early on, it didn’t seem like any of the championship contenders had the speed to run up front at Laguna Seca.

Newgarden hovered inside the top 10 for the majority of the practice sessions. He ended Friday morning ninth on the charts, then improved to sixth in the afternoon. On Saturday, he moved up a few more spots, landing the No. 2 Team Penske Chevrolet second on the time sheet.

Pagenaud showed similar speed but was slightly quicker on Friday, clocking the sixth-best time in the morning and fourth-best speed in the afternoon. He held onto that spot on Saturday’s final practice.

Dixon had a less than stellar start to his weekend, with his Chip Ganassi Racing team ending the first practice in P14. But Dixon moved up to just outside the top five in the afternoon session, as well as Saturday morning.

Rossi, however, looked to be in some trouble. Only logging four laps in the opening session, last year’s championship runner-up was dead last, P24, on the timesheet, and only improved one position by the end of the day. He managed to get his No. 27 Honda up to 10th on Saturday morning, but was still nearly half-a-second off Felix Rosenqvist’s chart-topping time.

Rosenqvist, by the way, wasn’t the only rookie showing speed. Colton Herta led Rosenqvist in the opening practice, then kept the No. 88 inside the top 10 for the remaining two sessions.

In first practice, Santino Ferrucci hung right with his two Rookie-of-the-Year rivals, who will be battling for a title of their own on Sunday. Ferrucci ended the morning just behind them in P3, then fell further down the charts as the weekend went on.

But when it came to qualifying, all four of the title contenders found some speed. Newgarden, Rossi, Pagenaud and Dixon all made the final Firestone Fast Six of the Year, joined by James Hinchcliffe and Herta, who claimed his second career pole.

Dixon, one of just a few drivers with IndyCar experience at the track, will start alongside Herta on the front row, while Newgarden and Hinchcliffe will line up on the second row. Pagenaud, just two tenths of a second behind Newgarden’s time, will start directly behind him, while Rossi will take the green flag from the outside of row three.

With four drivers in contention for the title, it’ll be hard to pay attention to anyone else on track. But there are still plenty of storylines to go around in the NTT IndyCar season finale.

With Herta starting on pole and freshly signed to a deal with big league squad Andretti Autosport, he’ll be motivated to end his season and time with Harding-Steinbrenner Racing on a high note and build some momentum for the new year.

Rosenqvist, having to play nice with his teammate at Mid-Ohio, has yet to snatch up a win in his rookie season. Although it’s his last chance, with the speed he’s shown, it could be his best one yet. So expect the Swede to be fighting at the front of the field, playing the potential spoiler to someone’s championship hopes.

Conor Daly has been rumored to be in the conversation for a seat with McLaren SPM in 2020, so his performance this weekend could be a defining moment in his career. A solid showing could finally give him a quality, full-time ride, but a poor afternoon might mean another year of scraping together a part-time schedule.

All that pales in comparison, of course, to what we could see in the championship race. With all of the contenders starting up front, we could be in for some real fireworks. The final round of the season rarely disappoints, and I wouldn’t expect this year to be any different.

Coverage of the Firestone Grand Prix of Monterey begins at 2:30 p.m. ET on NBC, with the green flag expected to drop at 3 p.m. Live streaming is available on the NBC Sports app with a cable subscription.