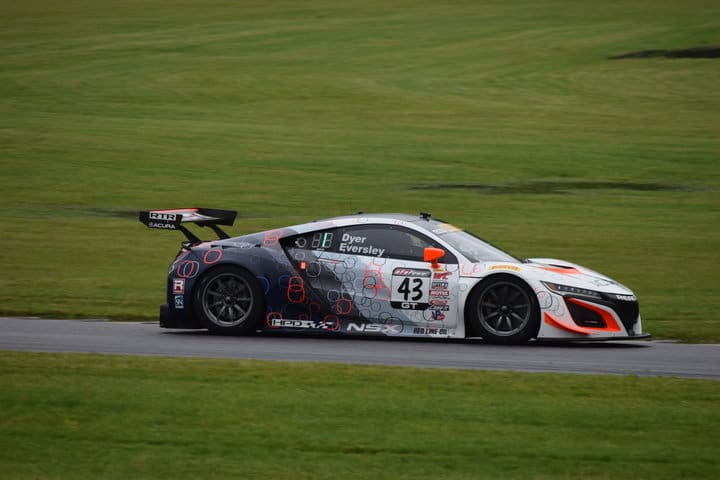 The Pro-Am pairing of Mike Hedlund and Dane Cameron were able to hold off a late charge from R. Ferri Motorsport to win Blancpain GT World Challenge America Race No. 2 at Road America on Sunday (Sep. 22).  It is the team’s fourth straight Pro-Am victory, but their first overall win of the year.  It is also the 100th victory for RealTime Racing, a team that has competed in various series since 1987.

“I’m really, really proud to be here for part of this,” Cameron said after the race.  “Ir means a lot to Peter [Cunningham, team owner] to [win their 100th race] here at home.  Super, super special day and I’m really proud of Mike [Hedlund].  He did an awesome job at the end under big pressure.”

By virtue of qualifying on Saturday morning, Racers Edge Motorsports’ Kyle Marcelli started on the overall pole.  Due to adverse weather, the first lap of the race was run behind the safety car.  Once the race went green, Cameron took to the outside line in turn 1 and managed to get around Marcelli for the lead.

Once at the front, Cameron was able to open up a decent lead on the pack.  Meanwhile, K-PAX Racing’s Alvaro Parente was able to pass R. Ferri Motorsport’s Toni Vilander on the first lap to take the Pro-class lead in fourth overall.

The first half of the race saw the teams more or less consolidate their positions.  Cameron pulled away to a lead of nearly four seconds over Marcelli prior to the pit stops.  The stops themselves didn’t change all that much.  Once Hedlund got in the RealTime Racing Acura, he inherited a three-second advantage over Martin Barkey in the Racers Edge Acura and held onto that.  Meanwhile, Wright Motorsports’ Anthony Imperato was hot on Barkey’s heels.  Andy Soucek in the K-PAX Racing No. 9 Bentley was 15 seconds back in fourth, but gaining seconds a lap on the leaders.

With 10 minutes to go, the whole complexion of the race changed.  DXDT Racing’s David Askew spun exiting the Kink and backed his Mercedes-AMG GT3 into the wall.  SRO America officials originally put out the safety car, but then quickly withdrew it within 10 seconds.  That was still enough time to change the outcome of the race.

A number of drivers including Soucek had backed off because of the safety car being called for.  Daniel Serra in the R. Ferri Motorsport Ferrari did not .  As a result, he went from sixth to second in a matter of a few seconds.

That left less than 10 minutes to chase down Hedlund, who was five seconds ahead.  Serra drove quickly, turning in some of the fastest laps of the race.  Hedlund turned up his pace as well, putting up personal bests.  It was just enough to give RealTime Racing the overall victory.

The margin of victory was just under half a second over Serra and Vilander.  With the second-place finish, R. Ferri Motorsport won the Pro class for the fourth straight race and seventh of the year.  It also clinched the Pro championship for Vilander.

K-PAX Racing’s No. 9 Bentley for Parente and Soucek were third, followed by the No. 3 Bentley of Rodrigo Baptista and Maxime Soulet.  Wright Motorsports’ Patrick Long and Scott Hargrove were fifth.

The 2019 Blancpain GT World Challenge America season will come to a close at Las Vegas Motor Speedway with two races on Oct. 19, the last of which will finish under the lights.